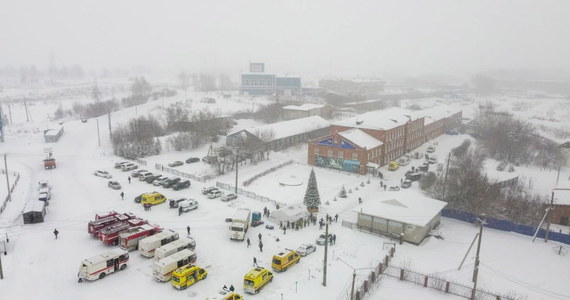 Explosion in a mine in Russia. There are dozens of victims

52 people died in a methane explosion in the Listwiażnaja coal mine in the Kuznetsk Coal Basin in the Kemer region of Russia in the morning, TASS reports. This is the worst mine accident in this country in 11 years, adds the Russian agency.

The inspection services reported in the morning about the appearance of smoke and then an explosion in one of the mine shafts in southwestern Siberia. At the time of the accident, 285 people were underground, the vast majority of them escaped from the mine.

In fact 46 miners and six rescuers died in the accident in Kuzbas. The rescuers brought 239 miners to the surface, including 38 of them were hospitalized and 13 were treated in the outpatient clinic. Four people are in a difficult condition, but their lives are not in danger, the doctors said.

“According to preliminary findings there is no one left alive in the mine. 52 people died, including rescuers, “a source from emergency services told TASS.

Earlier, authorities reported that 11 dead miners and three rescuers were found dead looking for people trapped underground. 38 people were missing then, including another three rescuers.

Most of the victims’ bodies are in the mine. After the temperature and methane concentration stabilize, they will be transported to the surface.

The rescue operation, carried out at a depth of 250 meters, was interrupted in the afternoon due to the risk of an explosion. The rescuers rode to the surface. According to Interfax, the miners had six-hour oxygen supplies that could be extended by several hours, but they would have run out late Thursday night anyway.

The TASS agency said, citing a source close to the investigation into the crash, that three people were detained – the mine director, his first deputy and the head of the department. Initially, two detentions were reported.

The Technical Inspection Agency (Rostiechnadzor) said in the evening that this year, over 900 violations were recorded in the Listwiażnaja mine; Nine times her work was interrupted.

“In 2021, 127 inspections were carried out at the mine, during which 914 violations were recorded, the total amount of fines exceeded 4 million rubles” – said the representative of the agency Andrei Wil.

The mine exploded earlier in October 2004. Thirteen people were killed in the methane explosion. The media also recall the 1981 outbreak in which five people lost their lives. The mine has been operating since the end of 1954.

Videogames entered his life in the late '80s, at the time of the first meeting with Super Mario Bros, and even today they make it a permanent part, after almost 30 years. Pros and defects: he manages to finish Super Mario Bros in less than 5 minutes but he has never finished Final Fight with a credit ... he's still trying.
Previous Nicola Zalewski getting ready for the transfer in January? Italians write about numerous football football offers
Next Like household appliances, it’s only on Black Friday!