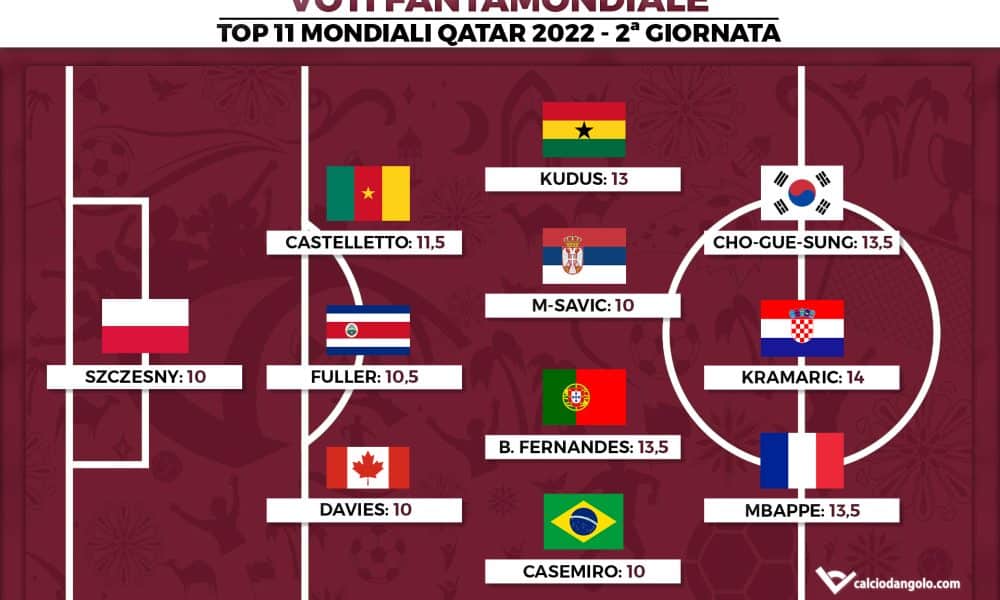 Fantamondiale votes: the Top 11 of the second day of the Qatar 2022 World Cup


The Top 11 of the second day of the Qatar 2022 World Cup, collected in a single formation with the best Fantasy World marks, data based on the real performances of the players thanks to their marks taken from the report card, to which the Fantasy World bonuses are added. The best goalkeeper, the best defenders, the best midfielders and the best forwards, together to compose the best eleven with the highest rating day after day. Finally, the player with the best vote and the best fantasy vote of the day.

He deflected Kanno’s shot over the crossbar and took part in the scoring action by throwing Cash on the wing. Then you need miracles. He saves the penalty from a possible draw, and gets up in time to punch Al Burayk’s tap-in for a corner. Incredible. Closes the mirror again to Al-Dawsary in the second half, on a close shot. Supreme. The greatest goalkeeper of this second day, also confirmed by the fantasy vote of 10, obtained thanks to the 7 in the report card to which was added the obvious bonus of +3 for the penalty save, then giving away 3 really fundamental points for Poland Lewandowski.

In perennial difficulty in marking. The one against one decided by coach Song is a scheme that lays bare all the technical limits of the Cameroonians. He only gets enough for the goal that unlocks the game: in the right place at the right time. 11.5 his fantasy vote, as well as the highest of the day among the defenders.

Excellent performance for the most talented Canadian, who scores the fastest goal of this edition of the World Cup. Thanks to Laryea’s coverage behind him, he had more freedom in the offensive phase, creating dangers for Juranovic. In the second half he tried to put the team on his shoulders, with poor results. The third highest fan vote of the day goes to Davies, who gets an excellent 10 despite the 4-1 defeat against Croatia.

He pushes to the right, even if his teammates rarely serve him with playable balls. In the second half, then, you have the great merit of being ready for the appointment with history by unleashing a left footed shot on which Gonda is not impeccable and which is worth the victory. The Costa Rican Fuller is added to the Top 3 of defenders for this second day of the World Cup, who with a 10.5 formed by the 7.5 on his report card and the +3 bonus, enters the Top 11 of the day by right.

The coach raises the position of the Lazio midfielder and is rewarded with a sumptuous match. Left-footed goal, kiss assist for 3-1 and plays as a total player. 10 his fantasy vote, which could have been even higher given that the Lazio player came close to scoring twice on several occasions. It is the lowest fantasy vote of the day among midfielders.

He starts badly making a lot of mistakes but then picks up the pace with classy plays such as the cross-shooting that slips into the corner which is worth the victory. In the final he conquers and also converts a penalty kick. 13.5 the fantasy vote of Bruno Fernandes, the second highest of the day, more than deserved, also considering the many chances had by the Portuguese who also hit the post in the final match. 7.5 his grade on the report card +6 bonus.

It is inevitable not to reward the qualifying man as the ‘man of the match’. In any case, he confirms himself as a player of enormous quality not only from the point of view of the defensive order, but also in ballistic skills. He takes Brazil to the round of 16 thanks to his goal and gets a fantasy vote of 10 for this second day of the Qatar 2022 World Cup.

Absolutely devastating, personal brace that is signed in the second half. A player on whom many fantasy coaches are betting that in the event of Ghana passing the round, which is still difficult given the match against Uruguay on the third day, they will be able to continue betting, being a player who knows how to give away goals and assists. Like on the second day where he scored 2 times against South Korea. 13 his fantasy vote, 7 the vote on his report card.

He sends the opposing defense into total confusion, with his role as a free hitter behind Livaja. Although his position was theoretically on the right, he showed the best things on the left, the band from which the momentary equalizer also came. He scores a super goal for 3-1, finding himself free once again to then have time to invent. 14 his fantasy vote, i.e. the highest of the day. 8 I vote for them on the report card.

If he is inaccurate in the first half, he finds an absolutely fantastic brace in the second half. He also comes close to the hat-trick but gets a truly incredible 13.5 for this second day.

Halftime: Shoot a moving penalty into the stands. He redeems himself with a devastating recovery: he builds and finalizes the action of the momentary 1-0, of robbery that of the definitive 2-1. 31 goals for France, seven at the World Cup, at not even 24 years old. Numbers from phenomenon as from phenomenon is his fantasy vote, 13.5!

The best fantasy vote of the second day of the Qatar 2022 World Cup is that of the Croatian Kamaric, who by half a point Mbappé, Cho-Gue Song and Bruno Fernandes, who, having obtained a 7.5 in his report card and a fantasy vote of 13.5 thanks to the bonuses by +6, they remain one step below the fantavoto of 14 lost by Kramaric. The grade on the report card made the difference, having been an 8.

The best mark on the report card of the second day of the Qatar 2022 World Cup is still from Kramaric, author of a truly great match against Canada, in which Croatia started from behind with a goal by Davies from Bayern Munich, to then completely overturn the match, then finished 4-1. His was the highest score on the second day of these World Cups.

The world of football is similar to that of entertainment: the president of the team is the producer, the coach is the director, the sporting director is equivalent to the production manager, the players are obviously the actors and the match is the film.