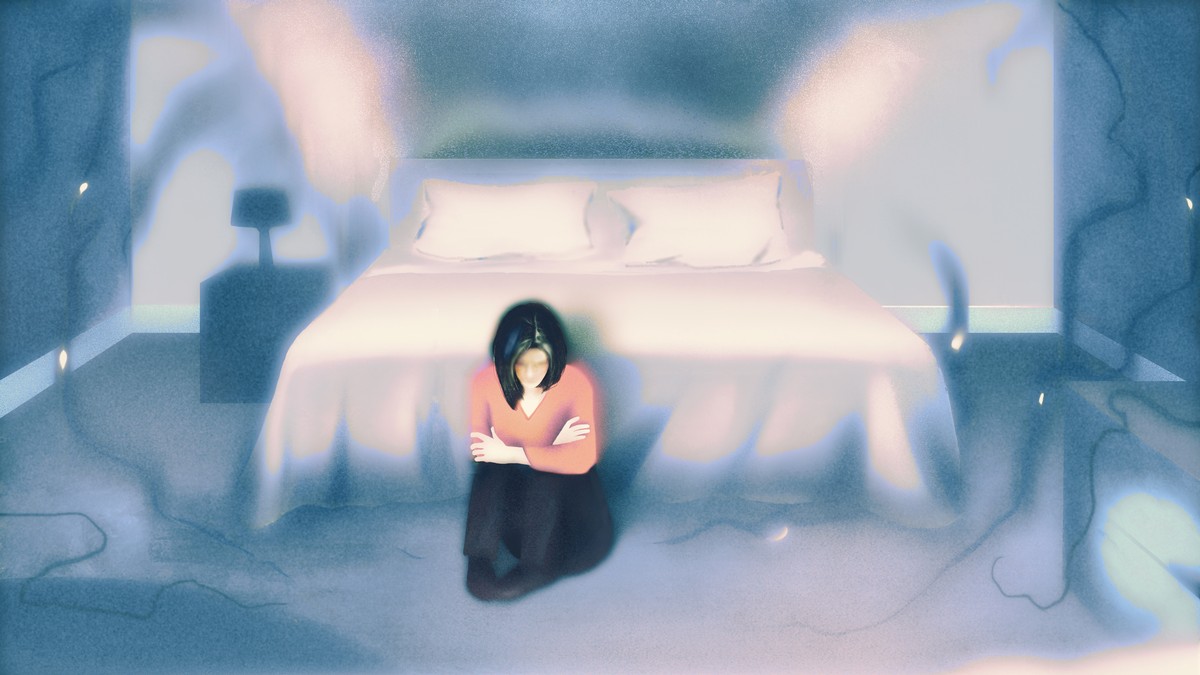 Fear of falling asleep: what is clinophobia

It is almost certain that the etiology of my strange disorder is of traumatic origin, because I began to suffer from it shortly after my mother died, around the age of eight.

“Sleep is the brother of death” is a simple syntactic construct that appeared among the first translation exercises in my first year high school Greek grammar textbook. It is a phrase that has stuck in my head, I remember it when in my slips I replace “sleep” with “die” or when I remain paralyzed in bed for fear of falling asleep.

My fear of falling into sleep unconsciousness is called clinophobia, a rather rare disorder that can arise as a result of other sleep disorders, from nocturnal paralysis to nightmares, or as a result of an unresolved trauma.

In my case it is not about insomnia: I would have no difficulty in falling asleep if it weren’t for the adrenaline rush that I feel at the exact moment I fall from dozing to sleep. It is almost certain that the etiology of my strange disorder is of traumatic origin, because I began to suffer from it shortly after my mother died, around the age of eight. My mother died at night in a hospital room after a long illness. My father told me the next morning that she had passed away at night and I thought she had disappeared into thin air while I was sleeping.

Since then, clinophobia occurs cyclically, triggered by anxiety or depressive phases. There are intervals that last months or even years, but sooner or later I know that in semi-sleep I will feel dragged into a fall in which what I am and have been is destined to disintegrate and I will try with all my strength to cling to the glimmer of conscience. that resists body fatigue: a “no!” that comes out of the throat like a retching or a deep breath before the apnea, the arms that extend forward to remove the unconscious state that falls on me.

“There are those who glide smoothly and quickly through the stages [dell’addormentamento]not remembering anything, and there are those who instead go back and forth, bringing subconscious material and altered perceptions back to the surface, “Michele Colombo, researcher at the Department of Biomedical Sciences of the University of Milan, explains to VICE via email. deals with quantitative analysis of brain waves (EEG) in the field of altered states of consciousness.

For example, some “hypnagogic phenomena (ie dreams during falling asleep) are dream interpretations of the release of muscle tension, and the peripheral control of the antigravity muscles that occurs with falling asleep,” continues Colombo. In practice, when we seem to “fall” just before falling asleep, it is our cerebral cortex that is activated, alerted by the brainstem that detects an involuntary movement of the body. “The mind, which in the meantime was already elsewhere, lost in the streams of hypnagogic thoughts and disconnected from the body, reacts to these signals of alertness and loss of posture, and interprets everything coherently as a fall into the void.”

In my case, it is precisely this downward fall in which I empty myself from sleep or prepare to be filled with it that terrifies me and pinches me to the desperate fear of dying.

After years of verbal and drug therapy, I am convinced that there is something eternal and unbreakable in that terror, that I will find it intact and triumphant when I have to close my eyes for the last time. The idea that my last thought will be drenched in fear breaks me even deeper than the thought of not being there forever and for no one within a couple of generations, if I’m lucky enough. It is as if the meaning of my whole life were far from me, locked up in the last moment that awaits me, in a plea for help condemned to receive no audible response.

In the documentary Heart of a Dog, the artist and composer Laurie Anderson describes the rite of accompaniment to death practiced by Buddhists according to the prescriptions of the Tibetan book of the dead. During the passing away, monks whisper in your ear not to give in to fear and to follow the farthest light, rather than hurrying to the nearest one, which will lead you back into the samsara of reincarnations. I imagine them, these monks, as doulas that accompany you towards a birth momentarily without senses, without joy or pain, and I wonder if they could help me to overcome the clinophobia which, after all, is nothing more than the anticipation or the part for the whole of the fear of dying. Perhaps it is a hope that I cherish because of the disillusionment I feel with Western approaches to terror and death.

As Chiara Teneggi, doctor in Philosophy of the mind who has integrated the teaching of Yoga therapy in the oncological rehabilitation paths of the Onconauti Association of Bologna, explains to VICE, in human history, “there has been a real break in relationship between man and death. Since the twentieth century, Western culture has begun to pulsate with the reflections brought by existentialism and nihilism and a progressive oblivion of the issues that, due to their intrinsic unknownness, generate fear and anguish in the human being has advanced—primarily the death. Once the horizon of a ‘universal after’ has been lost, our culture is linked to the instant and to the appearance. ”

Appearance, explains Teneggi, is something we decide (net of the influences of the context in which we live), while “the thought of death, as well as that of serious illness, leave no room for any decision, for any appearance.” The culture in which we live therefore offers very few tools for elaborating the meaning of death and disease, so much so that the Western approach “can be summed up in two simple sentences: ‘it is not good to talk about death. We will think about the disease when and if it arrives, ‘”adds Teneggi.

A third way, in Teneggi’s experience with people facing a serious diagnosis, as well as in Laurie Anderson’s human and artistic experience with her own grief, is represented by meditation – which teaches us, Teneggi says, to perceive our thoughts as background noises, and, above all, “not to be afraid of fear.” This is also what the professionals who dealt with my thoughts have always told me: therapy must teach your brain, chemically or emotionally, not to be afraid of fear, it must eliminate the anticipatory fear that triggers panic, just like that. you will heal.

Among the various psychotherapeutic approaches, the cognitive-behavioral one and the most recent EMDR (acronym of the English “eye movement desensitization and reprocessing”, or desensitization and reworking through eye movements) seem to boast the best clinical results in the treatment of anxiety and of phobias of traumatic origin. The technique adopted for the treatment of symptoms related to PTSD and generalized anxiety is based on controlled exposure to stimuli that activate the patient’s state of malaise and / or panic. The so-called VRET (Virtual reality exposure therapy) method used in the treatment of US veterans involved in the conflicts in Afghanistan and Iraq is also based on this type of approach.

“Virtual reality is a useful tool for teaching the patient relaxation techniques, such as guided breathing and biofeedback,” explains Pallavicini. “Furthermore, through this technology we can gradually immerse the person in the situation that traumatized him, in a safe and controlled context by the therapist. This is intended to help rework the trauma on a cognitive level and develop new strategies to manage it, ”he continues. Born to treat soldiers who have seen or caused deaths, serious injuries or deadly threats, the VRET method seems to have excellent effectiveness even in the training phases that precede the sending of soldiers on mission, both in the field and remotely, or in the bases on US soil where drones aimed at suspicious enemies are guided. Fear can be cured a posteriori and even inhibited a priori — or, at least, that’s what the statistics show.

Sometimes I wonder if therapies based on exposure to fearful stimuli might work for me too. There are specific VR programs for sleep disorders, including a system developed by researchers at the Royal Melbourne Institute of Technology, called InterDream, which immerses the person in a multimedia art installation that promotes pre-sleep. , explains Pallavicini, adding that “in terms of commercial content, there is a growing number of applications that can be used from the comfort of home, such as mindZense Sleep or Guided Meditation VR.”

Despite the developments in research and the market, I cannot imagine a technique capable of putting myself consciously in front of the loss of consciousness, on the contrary it seems to me a contradiction in terms. On the other hand, what is consciousness?

From a scientific point of view, it is operationally defined as “the presence of an experience by an organism, beyond the ability to respond, to report it, its behavioral repertoire, and the content of the experience,” explains Colombo. , but it is also “very delicate to study from an objective point of view, because the presence of a conscious experience is by definition a subjective property, accessible only to the person who experiences it.”

For the philosophy of mind – which intertwines and compares with cognitive neuroscience – and in particular for Eastern philosophy, says Teneggi, “sleep and death are both experiences that take place in the realm of consciousness,” and yet the phenomenon of consciousness remains as unknown as death.

I see a break between being conscious and not being conscious for the same reason that I can’t meditate, no matter how hard I try, because I don’t know how to conceive myself as something that contains, at the same time, my presence and my watchful absence. . If only I could learn something in the moments when I don’t know who I am and what I do, maybe I would recover from clinophobia and stop being afraid of fear.

Videogames entered his life in the late '80s, at the time of the first meeting with Super Mario Bros, and even today they make it a permanent part, after almost 30 years. Pros and defects: he manages to finish Super Mario Bros in less than 5 minutes but he has never finished Final Fight with a credit ... he's still trying.
Previous Taylor Swift’s album at the top of the Italian chart
Next Goodbye to the big brand, it’s definitely over: official closure