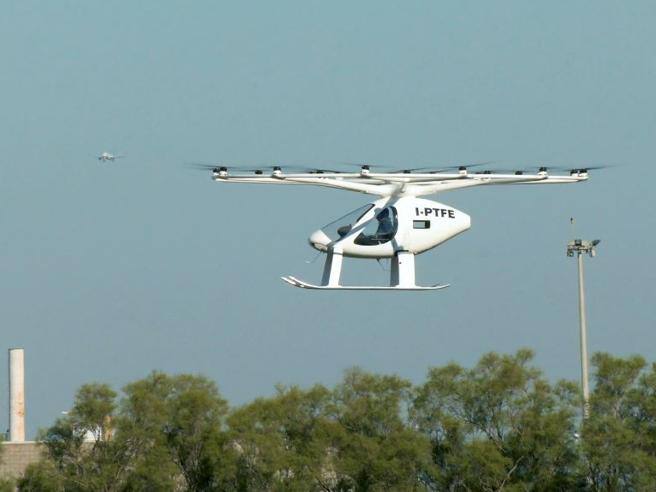 “First passengers in two years, from Fiumicino to the center of Rome in 20 minutes” – Corriere.it


The first (experimental) flight of VoloCity at 9.56 from Fiumicino: the small electric aircraft flew at 40 meters above sea level and 40 kilometers per hour. 2025 Jubilee Goal

At 9.56 in the morning, Paul Stone powers up the eighteen engines of VoloCity and makes Italy’s first flying electric taxi take off. A test flight in Fiumicino – at an average of 40 kilometers per hour and about forty meters above sea level – which officially opens the chapter of advanced air mobility in our country and which looks to 2024 as the year in which people will have the opportunity to move between the center of Rome and the main airport of Italy in just 20 minutes and which aims to embark 100 million travelers in the Capital area by 2045.

The first take-off in Italy also represents the first official use of the “vertiport”, the space in which flying taxis land or from which they take off following a precise route and which must then be implemented in an airspace where, in addition to the planes, the drones for the transport of goods. The flying taxi flew for about five minutes and landed at the same take-off point.

The network of connections

“This electric taxi is like a helicopter but safer, quieter, cheaper and more sustainable”, summarizes Marco Troncone, CEO of Aeroporti di Roma, the company that manages the Fiumicino and Ciampino airports and invests in Volocopter, the startup German which has already made three versions of VoloCity and is awaiting the green light from the European civil aviation authorities also for the fourth prototype. Troncone also recalls that the intention is “to create a network of connections in Rome”.

VoloCity flies thanks to 18 engines powered by nine lithium-ion batteries, has a range of about 35 kilometers and can reach a speed of 110 kilometers per hour. It has a height of 2.5 meters, it is designed to carry, depending on the model, 2 people (including pilot) or 4. Volocopter has also created a version for the freighter so as to transport goods.

“This flight is the demonstration that Italy knows how to create a system, even in the world”, comments Pierluigi Di Palma, president of the National Agency for Civil Aviation. “In a few years, traveling by flying taxi will be part of our daily life.” “Our industrial strategy is strongly focused on investments in technology and innovation, so as to make our assets increasingly sustainable and pave the way for new forms of integrated mobility”, adds Giampiero Massolo, president of Atlantia. “In just under a year we have gone from a signed partnership agreement and the launch of a series of events to a flight test in a functioning facility,” said Christian Bauer, Volocopter’s Chief Commercial Officer and Interim Chief Financial Officer. “This vertiport represents our first step towards the creation of a network of vertiport in the Rome area”, explains Carlo Tursi, head of UrbanV, a company that promotes the development of airports for the aviation of the future.

The variety offered by video games never ceases to amaze him. He loves OutRun's drifting as well as the contemplative walks of Dear Esther. Immersing himself in other worlds is an incomparable feeling for him: he understood it by playing for the first time in Shenmue.
Previous The introductory course to traditional Chinese medicine arrives at the San Giorgio Library
Next the message after the defeat against Chelsea