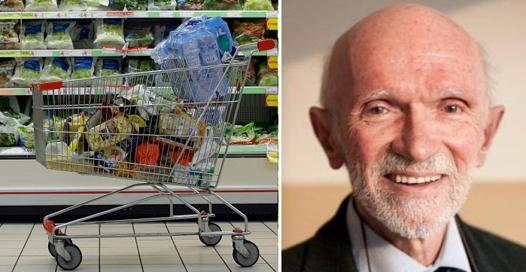 Franco Berrino: “Eat the food produced by plants, not plants”

It is a famous aphorism from the delightful libretto of Michael Pollan entitled «Breviary of food resistance». In another book of his – “In defense of food” – Pollan adds: “When you go to the supermarket, always stay along the peripheral walls, not in the central corridors, because along the peripheral walls there are foodvegetables, fruit, fish, cheeses, meat, bread, while in the central corridors there are the industrial transformations of food ».
Over the past five years, numerous epidemiological studies have looked into the health effects of the consumption of industrial foodsin particular of the so-called “ultra-processed” foods (ultraprocessed). What are? They are biscuits, industrial rolls and breads, sweetened breakfast cereals, margarines, sauces, sweet or savory spreads, ready meals only to be heated, many canned foods, yoghurt with added sweeteners or fruit, industrial drinks, cold cuts and industrial cheeses, foods treated with dyes, preservatives, emulsifiers, antioxidants, antiplatelet agents …
All foods designed to be attractive enough to replace natural foods. They account for over 50 per cent of the foods consumed in the United States, Canada and the United Kingdom, but less than 30 per cent here.
Seven large epidemiological studies involving tens or hundreds of people have consistently shown that the more we eat, the earlier we die. The risk of death it grows in proportion to consumption, up to 50 per cent more for those who mainly eat ultra-processed foods than for those who rarely consume them. At the time of writing, more studies have documented an increased risk of cardiovascular, diabetes, obesity. A large study conducted in France found an increased risk of cancer: 12 percent more for every 10 percent more ultra-processed foods. The cause is likely that those who eat this stuff are moving away from the consumption of protective foods (whole grains, legumes, vegetables and fruit), but it is also Food additives are likely to cause health problems.

The emulsifiers used by industrial confectionery, such as mono and diglycerides of fatty acids (E471), polysorbates (E433-E436), carboxymethylcellulose (E466) tend to dissolve the mucus favoring the contact of intestinal microbes with the mucosa and causing inflammation. Nitrates and nitrites (E249-252), used mainly for the preservation of meat, are associated with a increased mortality from cancer, diabetes and cardiovascular, respiratory, liver and kidney diseases. Carrageenan (E407), used as a gelling agent for puddings and cakes, causes glucose intolerance and insulin resistance in rodents.
Monosodium glutamate (E621), widely used by the food industry as a flavor enhancer, is toxic for the nervous system, in particular for the hypothalamus: in rodents, at doses slightly higher than those to which humans can be exposed, it causes voracity and obesity; it was also genotoxic in in vitro experiments on human cells. Polyphosphates (E452), used in cured meats and processed cheeses as thickeners and in pastry as raising agents, damage the endothelium, kidney and bones. The caramelused as a colorant in many industrial beverages, contains 4-methylimidazole (E150), a carcinogenic substance. Two antioxidants widely used as preservatives (nuts, chips, chewing gum, milk powder, ready-made soups), butylated hydroxyanisole (BHA, E320) and butylated hydroxytoluene (BHT e321), cause DNA damage. Metabisulfites (E223) added to wine and dried fruit cause gastritis, colitis and headache. Tartrazine (E102), a yellow dye permitted by the European community for cheeses, fruit, canned vegetables, wine and seafood, increases the production of inflammatory cytokines by white blood cells and causes intolerances and allergic reactions. The European Food Safety Agency (EFSA) claims that its toxicity is not proven, but let’s ask ourselves if it makes sense to eat it. EFSA acknowledged that titanium dioxide (E171), a dye widely used in broths, sauces and baked goods, cannot be considered harmless because it is likely carcinogenic, but has not prohibited its use. A recent study conducted in France estimated that many of these additives are consumed regularly by a large part of the population: mono and diglycerides and carrageenan from 78 percent of the population, nitrites from 74 percent, polyphosphates from 70 percent, metabisulphites from 45 percent. Better stay away from all this stuff. We at «La Grande Via» recommend eating food and not industrial food processing.

Videogames entered his life in the late '80s, at the time of the first meeting with Super Mario Bros, and even today they make it a permanent part, after almost 30 years. Pros and defects: he manages to finish Super Mario Bros in less than 5 minutes but he has never finished Final Fight with a credit ... he's still trying.
Previous 20 million agreement – Corriere.it
Next Grey’s Anatomy 19, the previews on the new season