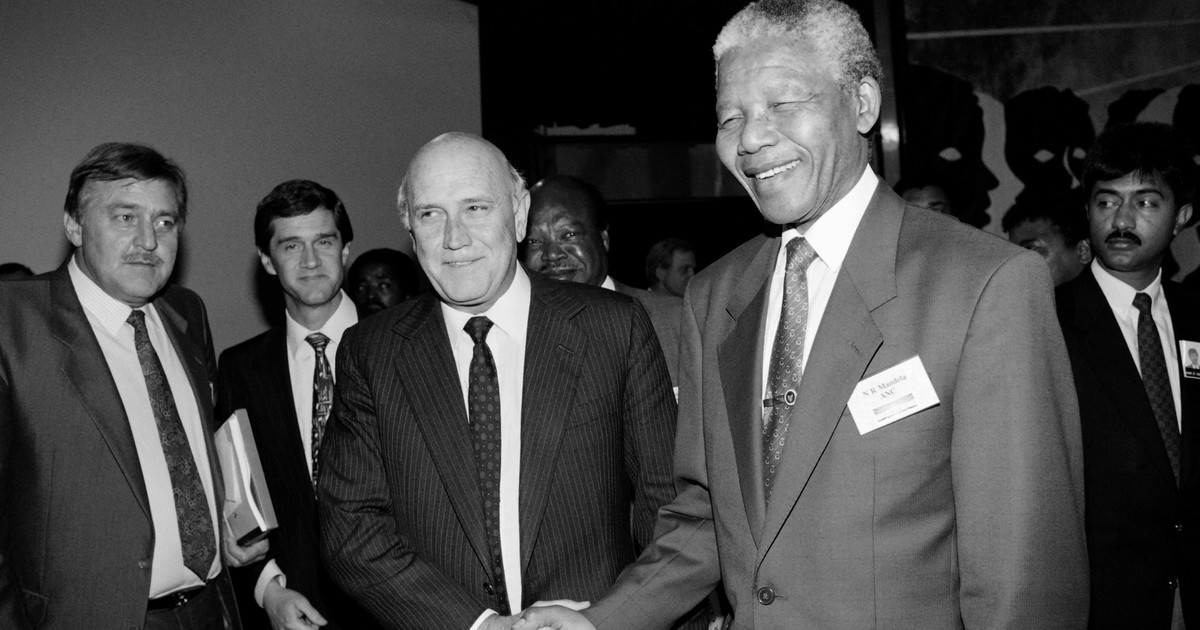 Frederik Willem de Klerk is dead. He is the last president of the apartheid era

Frederik Willem de Klerk was head of state from September 1989 to May 1994 and became one of the country’s two vice presidents after the first multiracial democratic elections in April 1994.

Frederik Willem de Klerk. Who was?

The son of a senator and minister of the National Party, De Klerk entered parliament in 1972 after graduating from law studies and winning a mandate in Vereeniging (a city in South Africa, Gauteng Province, on the Vaal River) in what was then South Transvaal. He was appointed to the office of Prime Minister John Vorster in 1978, where he was the head of several ministries, incl. at the Ministry of National Education. De Klerk was also a member of Broederbond, a secret Afrikaner organization that was active in politics and society at the time.

In February 1989, he replaced Pieter Willem Botha as leader of the National Party after Botha suffered a stroke and resigned from the party leadership. De Klerk became president seven months later.

Frederik Willem de Klerk and the end of apartheid

On February 2, 1990, exactly one year after taking the helm as leader of the National Party, de Klerk announced in parliament the lifting of bans on the creation and operation of black liberation movements. He also made a decision to release Nelson Mandela unconditionally from prison. This led to the multilateral negotiations that took place from 1990 to 1994, paving the way for democratic elections.

The Nobel Peace Prize in 1993 was awarded jointly to De Klerk and Mandela, who the following year became the country’s first democratically elected president.

De Klerk became the first opposition leader after the elections and led his party from the Government of National Unity in June 1996. He withdrew from active politics in August 1997.

He testified before the Truth and Reconciliation Commission on behalf of the National Party in August 1996 and May 1997, where his apologies for apartheid were criticized as insufficient.

After his political career, he set up a foundation that tried to play a role in civil society in African countries. He was also involved in a global leadership initiative called “The Elders,” made up of former heads of state who stood for the rule of law and human rights.

However, in 2012, de Klerk gave a controversial interview with CNN journalist Christiane Amanpour in which he defended aspects of apartheid. In 2020, he refused to admit that the system was a crime against humanity.

Apartheid – what was this ideology?

Apartheid is a totalitarian ideology calling for the segregation of the population, based on the belief in the superiority of the white race and discrimination of black and colored people. This socio-political doctrine was implemented in South Africa as the basis of the state system in 1948-1994. The symbol of the victorious fight against apartheid in South Africa is the winner of the Nobel Peace Prize – Nelson Mandela. In 1968, apartheid was declared by the United Nations as crimes against humanity.

The term apartheid was coined in the 1930s, although its assumptions date back to the previous decade. In fact, however, the doctrine known as apartheid began to be used by the National Party (PN) in South Africa only in the late 1940s. In 1948, the PN came to power in this area, systematizing the social custom of apartheid under the form of law. The law adopted at that time by the National Party prohibited, inter alia, mixed marriages and introduced a distinction between people by skin color: white, black and the so-called colored.

Apartheid in its assumptions shapes the doctrine of being separate from the European mainstream, rejecting the concept of a multiracial society. Supporters of this totalitarian ideology believed that the mixing of white Afrikaners with blacks would lead to the extinction of their race. Moreover, supporters of the apartheid ideology argued that South Africa should be a country inhabited exclusively by white people. Black people or the so-called colorful, they were supposed to live and work on reservations in the most hostile parts of the country, or to act as cheap labor for commuting to work in cities from the reservations.

After the National Party came to power and the new law was enacted, apartheid in South Africa intensified tremendously. As early as 1949, a law was introduced prohibiting mixed marriages. A year later, sexual contact between members of different races was prohibited by law. An absolute classification of all inhabitants into “white”, “black” and “colored” was imposed. The classifying factor was, inter alia, origin, appearance and habits. Shortly thereafter, “Asians” were added to the above-mentioned classification, which included mostly Indians.

In addition to the previously known division into races, the South African authorities also introduced spatial boundaries. Separate residential and commercial zones were assigned to each breed. This resulted, inter alia, in the forced displacement of South Africa’s 3.5 million black people to the provinces. In place of the houses of black people, which were demolished, new ones were built, intended only for whites. Moreover, in 1955, racial segregation was implemented in educational institutions. Whites could benefit from traditional education, while others were only trained as blue-collar workers. Blacks were banned from studying at universities for whites. Moreover, segregation was introduced in all public institutions – cinemas, public transport, restaurants and sports facilities. Non-white citizens did not have a vote in white national elections. The authorities of the “black provinces” were completely dependent on the central authorities. The vast majority of black people obtained citizenship of the so-called “Bantustans” (Transkei, Ciskei, Bophuthatswana, Venda and KwaZulu) while being stripped of South African citizenship.

Videogames entered his life in the late '80s, at the time of the first meeting with Super Mario Bros, and even today they make it a permanent part, after almost 30 years. Pros and defects: he manages to finish Super Mario Bros in less than 5 minutes but he has never finished Final Fight with a credit ... he's still trying.
Previous Paul Pogba ready to extend his contract with Manchester United. He made one specific condition
Next NS?? premiere of Skyrim: Anniversary Edition; players mostly satisfied