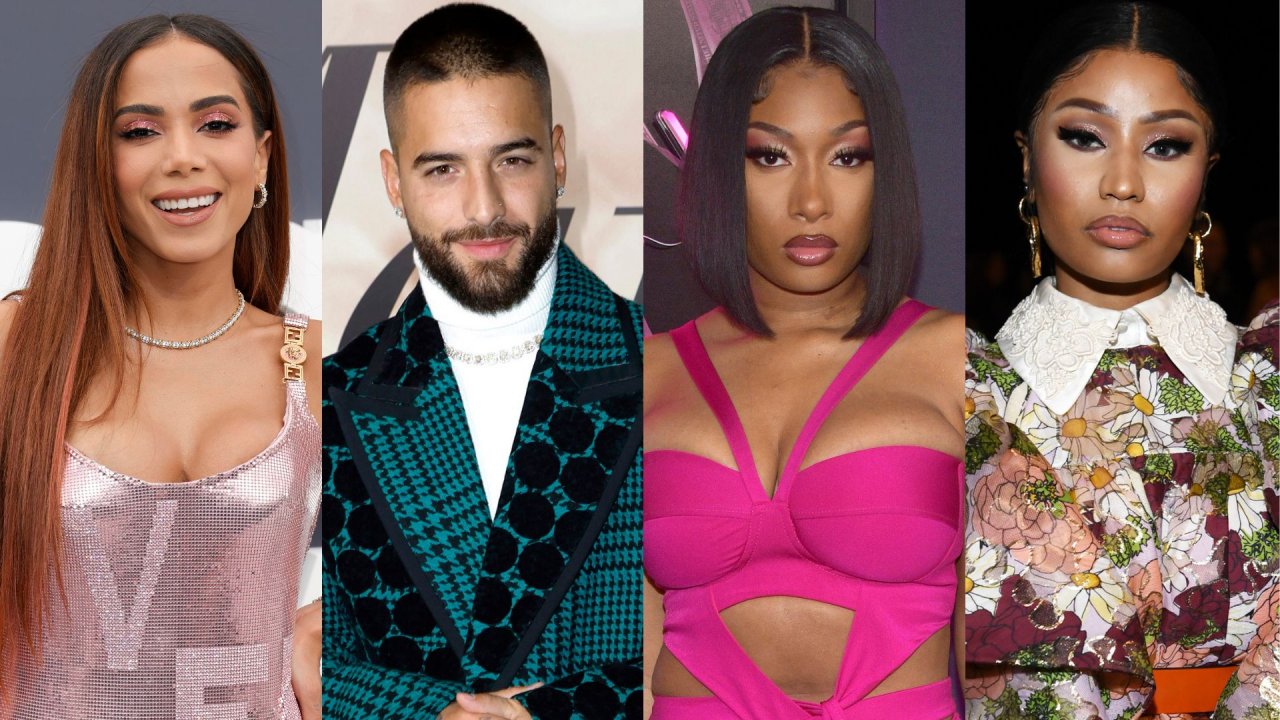 Are you also one of those who eagerly await musical news? This week you will be very well served! Anitta and Maluma left the fanfiction mode of fans very active when they collaborated for the third time, with the song “El Que Espera”. This week’s “Friday Releases” still spotlight two amazing women from the world of American rap. Megan Thee Stallion delivered it all on the “Traumazine” album, while Nicki Minaj served with the single “Super Freaky Girl”. And of course, the Brazilian touch couldn’t be missing from the list, thanks to the great MPB master, Djavan, and the rapper Baco Exu do Blues.

For those who love to ship artists, Malunitta lives with a romance worthy of cinema. At least that’s what the video for “El Que Espera” showed. This is another track released from the project of three visual records that mark the release of “Versions Of Me Deluxe”. The first was “Gata”, now missing only “Lobby”, a collaboration between the star and Missy Elliot.

Looking for a record where every track is a hit? So, here is this HYMNÁRIO by the American rapper. Megan is all set to top the charts with her album “Traumazine”. The work has 18 amazing songs and feats, with Dua Lipa on “Sweetest Pie”, and Future on “Pressurelicious”.

She’s crazy, she. After stoking – and a lot – the fans, the rap star released the single “Super Freaky Girl”. The song followed Nicki’s upbeat style that everyone loves and even featured a sample of “Super Freak”, a well-known hit in the voice of singer Rick James, a hit from the 80s.

One of the great names of MPB is back! After four years without new releases, the singer from Alagoas released the album “D”. With 12 tracks, Djavan brought an album with optimistic lyrics that outline a better future. The artist will be one of the attractions of Rock In Rio this year, where he will present the songs from the new work live for the first time.

Maximum trigger alert for those who just wanted to sex with a lot of cuddle. The rapper released the music video for the track “20 ​​calls”, from the album “How Many Times Have You Already Been Amado?”. In the production, recorded in Salvador, Baco has a very hot romance with actress Thainá Duarte.

What was already perfect has become even more flawless. After releasing the album “Keys” in December, the fifteen-time Grammy winner has now released the deluxe version of the work. “Keys II” arrived with two more unreleased songs: “Trillions”, a feat with Brent Faiyaz, and “Stay”, a partnership with Lucky Daye.

If there’s one thing she has, it’s borogodó, and that was very evident in the hits on her newest album. With eight tracks, “Borogodó” brought the singer playing in several very Brazilian genres, such as forró, calypso and even pagode. The work also had the incredible participation of Lia Clark, Tiago Pantaleão and Getúlio Abelha.

She is the one who commands the self-love revolution — and with a clip-on to call her own. The British singer made available the babadeiro visual record of the single “Free Yourself”. The song was the first to be released from the artist’s new album, which does not yet have a release date set.

The Argentine singer invited our favorite redhead for the single “Una Noche de Novela”, which explores the Latin style characteristic of Paulo’s work. But this was not the first collaboration between the musicians, as they also worked together on “Nothing On You”.

The Isley Brothers and Beyonce

Queen B never ceases to amaze us! Two weeks after releasing the hymnal “Renaissance”, Beyoncé joined The Isley Brothers for the re-recording of “Make Me Say It Again, Girl”, a romantic ballad originally released in 1975. In the first few seconds, the track is already taken by the voice of the singer. It’s one of those to hear dancing grudadinho with bae!

Completing twenty years of career this year, the artist celebrated this important milestone with the project “Meu Nome É Thiago André”. The album featured re-recordings of the most important songs in Thiaguinho’s career, such as “Palco”, by Gilberto Gil, and “Oceano”, by Djavan.

The saying “don’t judge a book by its cover” has been updated with the partnership of the singers. In the single “Embalagem”, the artists reflected on how art is consumed these days. The song also won a very concept clip and full of special effects.

Free, light and very loose! The countrywoman talked about her single life in the song “Vou te da trabalho”, which also has the vocals of Mc Danny. The track has already won a video clip all worked on in the cruising mood and with the very special presences of Viih Tube and Júlia Puzzuoli.

The world is too small for her and anyone who follows the artist knows that if there’s one thing Mom knows how to do, it’s serve hits. The bet of the time of the winner of the program “Queen Of The Universe” is the song “Dinner”. The very pop track explored the singer’s best: her golden vocals! The release also won a beautiful and very fun music video.

Let her know she’s here to stay! Success in the networks and now in the music world, Bella released her first EP, “Dolls”. The project included the well-known title track and hit “Build a Bitch”. In an interview with V Magazine, the singer stated that the work only explored the first chapter of her story.

With more than three decades of career, the iconic band Goo Goo Dolls released the album “Chaos In Bloom”. Gaab explored a slow, enveloping beat alongside McDricka in the song “The Night”. Three amazing women together can only produce one super empowered song, right? This was the result of the collaboration of Jade Baraldo, Karol Conka and Mac Julia in “Hold on to Silly”. Marcynho Sensation made the song “Chá de Horn” available, while David Bandeira released the single “Prague”.

Vannick Belchior continued the legacy of his father, the great musician Belchior, with the EP “Das Coisas Que Aprendi nos Discos”. ozuna joined tokischa in the song “Somos Eguales”. the country duo Hugo and Victor released the EP “Respeita a Minha Dupla Vol. 1″. the DJ afrojack heated up the dancefloors around the world with the single “Day N Night”.

Videogames entered his life in the late '80s, at the time of the first meeting with Super Mario Bros, and even today they make it a permanent part, after almost 30 years. Pros and defects: he manages to finish Super Mario Bros in less than 5 minutes but he has never finished Final Fight with a credit ... he's still trying.
Previous Salman Rushdie risks an eye, ‘severed the nerves of the arm’ – World
Next Sebastian Stan: 10 things to know about the actor