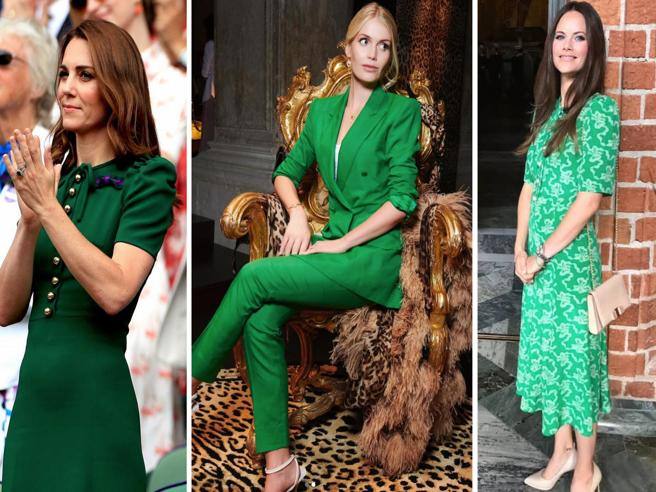 From Kate Middleton’s dress in the painting to Lady D’s niece’s suit, green is the color of royalty

The picture of the Dukes of Cambridge in which Kate Middleton depicted in an emerald green dress will probably lead to a boom in the look of this color, as often happens with the fashion choices of Prince William’s wife. But not only the green silk satin dress with which Kate was portrayed by the British painter Jamie Coreth an example of royal green: this color is often chosen by princesses, queens, duchesses and noblewomen in general, especially on official occasions that require a certain dose of refinement. It is not just about elegance: green is liked because it represents the color of nature, it symbolizes hope and seems to be able to instill calm, therefore ideal for reducing the stress of both the wearer and those around the wearer. The proverb ‘Who dresses in green his belt too trusts’ is now a saying to dispel, in vogue at one time since in the past green was considered a difficult shade to match (and not always capable of enhancing some complexions, such as olive ). Today, however, the green is experiencing a new spring, thanks to the royal personalities who have made it a real royal green, other than a prince charming: in the courts of the whole world the real prince is green. We recall that among the noblewomen of Hollywood, on the other hand, Keira Knightley is the one who deserves credit for having consecrated green to the most glamorous color of the silver screen, thanks to the dress worn on the set of the film Atonement (created by the American costume designer Jaqueline Durran and considered one of the best costumes in the history of cinema, for which Durran received nominations for the Oscar for the best costumes, at the BAFTA for the best costumes, at the Costume Designers Guild and at the Satellite Awards for that emerald lingerie dress). In her photo, Kate Middleton is sporting an intense green dress, with golden details of the metallic buttons. Image from Sussex Royal’s Instagram profile

David Martin is the lead editor for Spark Chronicles. David has been working as a freelance journalist.
Previous When John Turturro attacked Michael Bay on the set of Transformers – Revenge of the Fallen
Next CINEMA Jerzy Skolimowski awarded at Ischia Global 2022 – Il Golfo 24