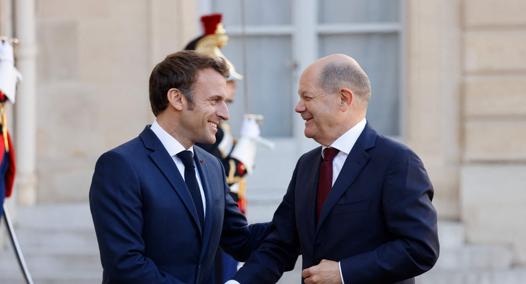 frost despite the smiles all’Eliseo- Corriere.it

After the “constructive” meeting, no press conference or final joint declaration

FROM OUR CORRESPONDENT
PARIS – The meeting of the rediscovered agreement began with a disagreement: yes to the final press conference according to the Germans, no press conference according to the French. And since the Macron-Scholz summit was in Paris, it was done as the Elysée wanted: at the end of a business lunch and an interview that lasted a total of three hours and 20 minutes the leaders of the two countries did not submit to questions from journalists, as is usually the case on these occasions.

One way to avoid any annoying insistence; so as not to have to repeat live, openly, the somewhat prefabricated formulas entrusted to official press releases; and also, at least on the French side, to point out that the problems did indeed exist and the relationship between the two great countries has not yet returned to its best.

In addition to the press conference, a joint statement was also missing. Anyway, according to the Elysée, the meeting was “very constructive” and made it possible to evoke “the Franco-German relationship in a spirit of very close work in the medium-long term” (in the short term it is therefore legitimate to have some doubts). Berlin defines the conversation as “friendly and constructive” by announcing that the next few weeks will see “an excellent and intense cooperation” of the Franco-German “engine”, which the French instead call more romantically “couple”. But “The truth is that it is a marriage of convenience,” says a French diplomatic source.

The most concrete announcement, if we can say so, concerns the forthcoming birth of “working groups” on energy, defense and innovation in order to “collaborate in view of the next steps”. But the very fact that we have to start from the bottom up, from the working groups, indicates that on the single problems – energy prices, aid to businesses and families, defense – the positions are distant.

There was a time when the governments of France and Germany were close enough to hold joint ministerial councils: just yesterday one was supposed to take place in Fontainebleau, but it was officially canceled due to problems with the agenda of some German exponents, including the Foreign Minister, Annalena Baerbock. That’s how last week in Brussels Macron had brought the disagreement to the surface: “I think that Germany’s isolation is not good for Germany itself or for Europe.”

And yesterday, beyond rather ritual declarations of intent, neither Macron nor Scholz indicated how they intend to find a single answer to the issues that divide them: France is in favor of the gas price ceiling supported by Italy, while Germany is contrary; Paris repeats that it is necessary to react to the economic crisis and inflation with European solidarity, on a continental scale, while Berlin without warning anyone has launched a 300 billion national plan to help German families and businesses; while Macron has been dedicating a lot of energy for months to building at least one embryo of a common European defense, Scholz prefers to buy American F35 fighters and involve the US and Israel in building an anti-missile shield to protect against Russian threats.

As for the diplomatic efforts to stop Russian aggression and achieve peace in Ukraine, Macron did it alone by asking the Pope to try to involve Orthodox Patriarch Kirill, Russian President Putin and American President Biden together.

Videogames entered his life in the late '80s, at the time of the first meeting with Super Mario Bros, and even today they make it a permanent part, after almost 30 years. Pros and defects: he manages to finish Super Mario Bros in less than 5 minutes but he has never finished Final Fight with a credit ... he's still trying.
Previous Zhang: “I’m not dealing with the sale of Inter. We are winning and I want to keep Skriniar “
Next Tonight on TV: the films of today 26 October