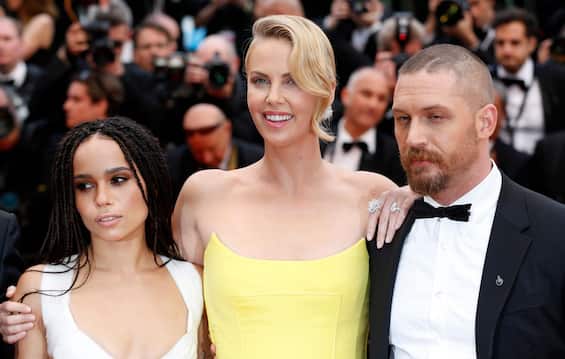 A furious quarrel made coexistence difficult on the set of “Mad Max: Fury Road”, directed by George Miller in 2015. What happened on set between Tom Hardy and Charlize Theron

It was understood from the first images of George Miller’s film that between Furiosa and Max did not run bad blood. However, if the characters of the steam-punk adventure of the moment managed to improve their relationship and find peace, the same cannot be said of the actors who played them. Charlize Theron and Tom Hardy are the protagonists of a furious quarrel that took place on the set of “Mad Max: Fury Road” in 2015 and to tell it is a book, which tries to clarify. This is Blood, Sweat & Chrome: The Wild and True Story of Mad Max: Fury Road, written by the New York Times reporter Kyle Buchanan, who refers to an incident that took place on the set that would have damaged the relationship between the two actors.

What happened on the set between Tom Hardy and Charlize Theron

If Charlize Theron and Tom Hardy have already talked about their quarrels during the filming of the film in the past, it was never made clear what ignited the fuse. Up to this point, the blame was placed on Tom Hardy’s behavior which, faithful to Method Acting, took Max Rockatansky’s particular attitude out of the shooting. However, thanks to the words of some operators of the set, including Mark Goellnich, it was possible to understand what was the beginning of the tormented relations between the two actors. “I clearly remember that day,” said Goellnich. “They were supposed to be at eight o’clock. Charlize arrived on time, she sat on the War Rig, the truck she drives in the film, knowing full well that Tom would never arrive at eight even if he was explicitly asked to be on time. Everyone knows that she is never on time in the morning. ” According to first assistant director Ricky Schamburg, Hardy would have done on purpose not to show up on time: “If you ask me, he knew he was pissing Charlize because she is a professional and she arrived very early.” When Tom Hardy arrived nearly three hours late, the actress was waiting for him. She continues Goellnicht: “She jumped out of the truck and she started insulting him heavily, saying: ‘One hundred thousand dollars for every minute of delay’. She was right and let it out. He may have only heard part of what she was saying to him, but she attacked her. He was very aggressive and she felt threatened. That was the point of no return “.

A point of no return that certainly did not help to create a close-knit group on the set. There are several stories that come from the set and tell of the tense atmosphere, which made shooting difficult and almost blocked the production of the film. Dayna Grant is Charlize Theron’s stunt double in “Mad Max: Fury Road” and she provides some of the details herself. The stuntwoman spared no words about the difficulties of working in such a working climate, due to the tensions between the protagonists: “It was really difficult. It was hard, very hard, because, of course, I had to spend time with both and neither. the two of them wanted to shoot scenes together, “Grant told Metro Portal. “Usually Charlize would come to the set and shoot the scenes, but they didn’t really want to know they were working as a couple, so she also assigned me some scenes where she had to be with Tom, so that I wouldn’t work on them. Conversely, Tom’s double was always paired with. Charlize, so we actually worked with each other as a substitute. ” She doubles instead of actors to avoid deadly confrontations, it seems. Dayna continued: “We always knew that. We knew the situation and it was evident during the fight sequences: there was a lot of tension. So we were told what was going on and they recommended that we try hard to make it work as well as possible. It was. difficult, because usually we are all in a large group and we work together, while for us it was not like that “.

The casting for George Miller’s masterpiece was particularly long and complex. At the auditions many already established or future stars, with some small surprises. The book Blood, Sweat & Chrome: The Wild and True Story of Mad Max: Fury Road, written by Kyle Buchanan, tells it

Mad Max: Fury Road is an extraordinarily successful film, highly appreciated by audiences, critics and the Academy, which awarded it with 6 Oscars out of 10 nominations. But its production was particularly troubled and had a complex and lengthy casting, as recounted by director George Miller and casting director Ronna Kress in the book. Blood, Sweat & Chrome: The Wild and True Story of Mad Max: Fury Roadwritten by Kyle Buchanan

For the role of Max, in the end, it was Tom Hardy who won. According to Miller, the British actor has something in common with Mel Gibson, actor of the first trilogy: “They are really open and friendly, so much so that they feel like they can be their best friend. But, at the same time, they have something that they keep hidden, confidential, inaccessible. And you can feel it on the screen ”

At the top of Miller’s list for the lead role, however, was another actor: Heath Ledger. “Every time he passed by Sydney, we met and, chatting, we always ended up talking about Mad Max. – said the director – Losing him was really a pity, not for Mad Maxbut because he was an exceptional person ”

David Martin is the lead editor for Spark Chronicles. David has been working as a freelance journalist.
Previous Kelly Clarkson Sings Demi Lovato’s “Anyone”
Next Natalie Portman Suggests Fans Might Like The Dark World