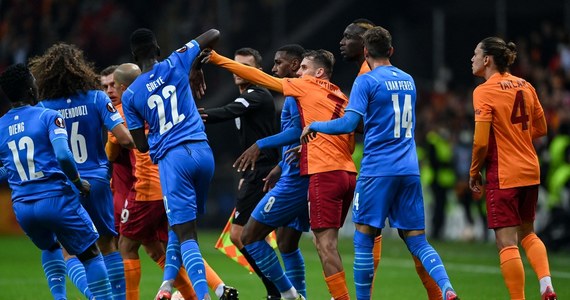 OM players joined this game after the dramatic events of the weekend. Recall that the game between Milik’s team and Olympique Lyonnais was interrupted after Dimitri Payet was hit in the head with a bottle by one of the fans.

Also read: Payet gave the testimony. “I was in shock”

The French star in the game against Galatasaray did not appear on the pitch due to the excess of yellow cards. In his absence, the charges of Jorge Sampaoli did not cope with the demanding task.

The game was lively and dynamic from the very beginning, and the hosts were more concrete in their actions, who could take the lead already in the 11th minute. Mbaye Diagne, however, only hit the bar. After a while, the effectiveness did not disappoint the Galatasaray team. Boubacar Kamara irresponsibly lost the ball in his own half, Alexandru Cicaldau took it, traded a pass with Sofian Feghouli and scored.

A few minutes later, Luan Peres was close to equalizing, hitting the post. An unused situation took revenge in the 30th minute – Cicaldau fell into OM’s penalty area and played the ball in such a way that Duje Caleta-Car shoved it into his own goal.

Shortly after the break, Bamba Dieng “stole” an assist from Milik, who had not been seen before. After passing the Pole, the 21-year-old passed the leaving goalkeeper, and then he only hit the side net.

The hosts seemed satisfied with the result. However, when they had the opportunity to score – they used it. This happened in the 65th minute after OM’s fatal loss. Kerem Akturkoglu then played to Feghoulli, who completed the formalities.

However, the guests did not give up. Arkadiusz Milik scored the goal on 1-3. The Pole did not take a penalty kick – his shot was saved by Fernando Musler – but after his rebound, the ball fluttered in the net.

In the 83rd minute it was already 4-1. Rayan Babel, who came from the bench a moment earlier, hit the goal. And this time the guests’ response was immediate and Milik was happy with the next hit. However, he did not save his team. Ultimately his team lost 2-4. Although Babel was still in the net, his goal was not considered offside.

David Martin is the lead editor for Spark Chronicles. David has been working as a freelance journalist.
Previous A new track is being built on the connection between Czarnca and Włoszczowa Północ. Photos
Next Black Sea. Romania concerned about the movements of the Russian military