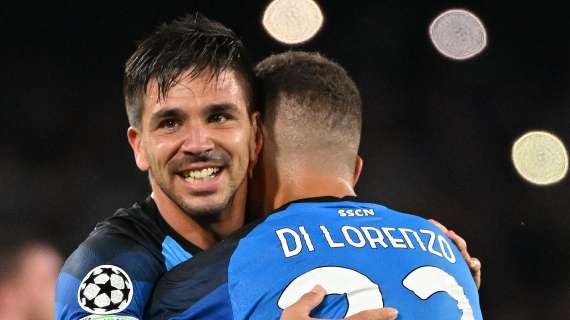 Zero on the front page of the Gazzetta dello Sport, which does not know what is being lost. Not adequately celebrating an ethereal beauty to the point of making the color of the shirts almost a detail. Faced with a historical event, a comet that passes over our heads and will return to greet us in a few centuries, one can only keep one’s nose up and abandon oneself to amazement. What turns into embarrassment going in search of the small square that the rosea dedicates to this stellar Naples. But “Did you do the math well? Is it convenient for you? “

One is the Boeing with Ndombele’s right departure that crashes on the crossbar disappearing from the radar like an exploded star. Shortly before, a cross had started from the same foot which almost caused a temporary loss of memory in Simeone. All the power in Tanguy’s foot, which regains confidence and is increasingly inserted into Spallettian concepts. It is a weapon that Napoli are preserving for the cold winter, smoothing the blade while waiting for the right blows to deliver. It will come in handy, like the infernal contraption to extract sims from new smartphones.

Two-zero like the 20 goals in five games that make Napoli the most impressive football machine of this first slice of the Champions League. What remains engraved in the mind is not that number, it is a feeling of well-being that is difficult to replicate. This team is a massage to the temples, a caress to the soul, those massage chairs in the malls. If this continues, the divorce lawyers will have to find another job: it is a Naples that makes you even want to quarrel with your wife / husband.

Three days, infinite, that will drag themselves like a pachyderm over in quicksand. What time does he play? How much is missing? Where is Kvara? And show me a little bit Lobotka swerving on the ball as if he were driving a kart? And Kim? Kim is okay yes? Abstinence. Damn abstinence. Unbearable abstinence. Other than a busy schedule, here it would take two games a day to quell this craving. Addicts of this Naples that we could turn the blue version of Trainspotting.

Four assists in the league and now the first in the Champions League for the Professor. The left-handed foil shot that lands at the end of the stroke on the lively head of the Cholito is delightful. All the quality of the Portuguese at the service of an offensive phase that always finds an inspired source in him. After the bench in Rome, Spalletti clarifies the concept: “Dicitancéllo ô Prufessore: I am not betrayed the wise!”

Five out of five, crazy numbers and not being sure of 1st place. Napoli’s constant in the Champions League is to deal with these astral combinations, never favorable: a last effort will be needed, which will be a great test bed. At Anfield Napoli arrives lightly, imprudent in its frenetic vitality but aware like an Indian sage who retires in his meditation. “A brave man dies only once, a coward many times”.

Six changes and the substance that does not change, with Ostigard becoming the 16th different scorer in the season. There are profound arguments, which go beyond particular interests, go beyond the individual and embrace broader concepts, deeper reflections. It is a large orchestra, which responds to a single call: total devotion to the symphony. “Move a single note and the music fades, a single phrase changes and the structure collapses”. This team is a matter of faith, a cult called joy.

Seven to Di Lorenzo, who illuminates the first shot towards the depth of Simeone immensely. Light in the north east, sunsets in the right lane sinking towards the opponent area and always finding the right solution, making it almost become a detail that the primary task would be to defend. It’s a bite that takes consistency over time, a taste that appears tastier from time to time as you watch it play every game without ever lowering its level. This John is a funny mystery, who plays every race as a phenomenon and no one wonders how this can happen.

Eight to Kim and everything disappears. Not a defender, but a black hole that leaves no trace of the matter it tries to orbit in its areas of expertise. It seems like one Matryoshka that hides the Little Buddha in the body of Yao Ming with the head of a chess player in a competition without tomorrow model Squid Game. “You are your best move” seems to have imprinted in the brain this boy who does not know the word distraction. Friends tell a sensational background about him: once he made a mistake on a football field. However, there are no eyewitnesses to what happened.

Nine to the sweetest kiss. Cholito makes love with the Champions League, gets intoxicated by the scents, gets lost in the sounds, goes wild with the hymn that heats the still hot ink on the skin. A tattoo like a promise, a journey that is a mission until the final half. The electrocution, Naples like Damascus for San Paolo. Suspended, on that fine line of offside which is a parameter of skills, choose which side to stand, tease time and space by mocking it with the shot that touches perfection. In the balance, between false and holy Gods, in a night that like summer you would like to never end. Simeone is a trademark, a way of experiencing the all-encompassing football. His Champions scream, with a tough face, as a plastic manifesto of a clear will. Crazy about Giovanni.

Ten that are no longer in it, that now they are already twelve consecutive victories of a group of superheroes with the face of good guys. Ordinary and extraordinary that merge, become the same thing, in the exercise of exceptionality that seems to be a very sweet routine. Difficult to explain, impossible not to be overwhelmed by this absolute flash of totalitarian beauty, enslaved in the sensation it generates. It is a journey without taking a step, a world tour inside a wonderful rectangle where everything becomes possible. Even the dreams of grown-up children, which footballers now have. Nobody wake them up. Nobody wake us up. Who cares what it will be. Today is the most precious moment we have.

David Martin is the lead editor for Spark Chronicles. David has been working as a freelance journalist.
Previous A new The Walking Dead spin-off about Negan and Maggie is coming
Next Political polls, one month before the elections: FdI advances and Forza Italia loses again. The Third Pole is tailing the League