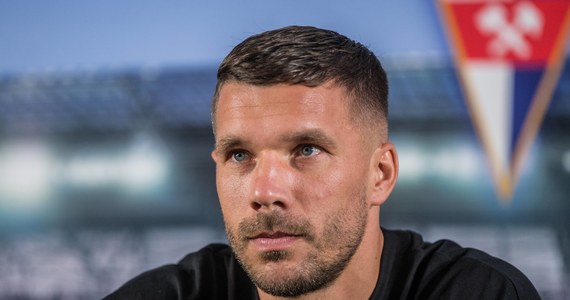 Górnik – Legia. Lukas Podolski on the debut of 15-year-old Stalmach

Lukas Podolski scored his first goal for Górnik Zabrze in Ekstraklasa. The leader of Zabrze was proud of the team which, after an emotional game, defeated the current Polish champions 3-2, scoring a decisive goal at the very end. After this match, “Poldi” was a guest of the Plus Extra League at Canal Plus.

– I think we played a very good first half. We were a bit “on fire …” in the first twenty minutes in the second installment. In a sense, “we stayed in the cloakroom”, but then we broke it and we managed to reach for three points – Podolski was pleased.

The former world champion with the German national team also revealed what he told the debuting Dariusz Stalmach, who is not yet 16 years old, and has already been given a chance to play in the Ekstraklasa match against Legia Warszawa, in addition to the first team.

– Before the game, we talked and I told him: as if something, if someone fouls you, come to me! – Podolski recalled. And he complimented the teenager: – You can see that he has a class as a footballer. We’ll see how it goes further now, the debut is behind him.

Podolski did not hide his satisfaction with the victory in the league classic. – A nice match for the fans, for us, we won with the Polish champion. But the season is long. These three points are important, we have some peace now.

The host of the program, Krzysztof Marciniak, also asked the football player of Górnik about the situations from previous league matches, when “Poldi” scored quite dangerous-looking fouls. He suggested that perhaps the 36-year-old was overdoing it with aggression on the pitch. – You probably don’t know football or you don’t watch it. I have played all over the world and I know that there are emotions and fouls on the pitch. Nothing like that happened, I have two yellow cards, that’s it – said Podolski. And he added: – One will say: yellow card, the other: red. I am not interested in it, I play for my Górnik.

Podolski also mentioned in an interview that he felt relatively strongly the effects of the coronavirus infection that he experienced a few weeks ago. – This coronavirus “did me a bit”, I don’t have enough strength. But overall I’m happy. Górnik is the most important for me – he emphasized several times.

David Martin is the lead editor for Spark Chronicles. David has been working as a freelance journalist.
Previous New footage from the detention of photojournalists. “Si, f *** a, won’t be photographed! How many, f *** a, times can you?”
Next Hamas attack in Jerusalem. One victim