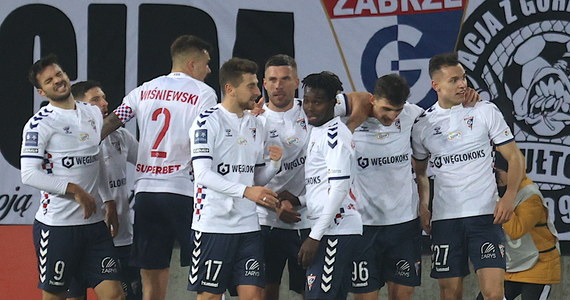 In the 39th minute, Lukas Podolski scored a 2-0 goal for Górnik Zabrze, for whom this is the first hit this season. It is controversial that Filip Mladenović was hit in the face by a dozen seconds earlier. Referee Damian Sylwestrzak did not find a violation and ordered the game to continue. Unfortunately, this action ended with a second goal for Górnik after just 13 seconds.

The Legia player could not accept the referee’s decision and his only hope was VAR, which was served by Tomasz Musiał and Konrad Sapela. According to the rules, VAR can be used in such cases, because after the incident with Mladenović, the opponents’ offensive action started, which ended with a goal and, importantly, the ball was still in the possession of Górnik. The problem was whether it was definitely a fault. Watching the replays, we see that Przemysław Wiśniewski, fighting for the ball, waved his hand and hit the opponent’s face with his hand.

If found to be an offense, the VARs had grounds to cancel the goal and return to the foul. Personally, I think it was a completely accidental hit, but can we say it is an offense? Certainly, the opinions will be divided, because it must be admitted that there was not much strength in it all, and probably this was what the VARs judged it to be.

In the 42nd minute, Luquinhas ran into Górnik’s penalty area, who wanted to nod Przemysław Wiśniewski. When the Legia player wanted to change the lane, the hosts defender put his leg out and probably hooked his opponent in the knee with a stopper. Taking advantage of this fact, the legionnaire fell to the pitch, but unfortunately the referee’s whistle was silent for him. The situation was checked by the VAR umpires, but they did not find any violations and the game was eventually continued.

It is difficult to judge this situation because, unfortunately, bad reruns were presented. We are not able to determine if Wiśniewski kicked Luquinhas 100%. If we decide that this is the case, the judges had serious reasons and reasons to indicate “lime”. I wonder how the VAR saw it. In my opinion, there are two options for how they interpreted this situation. Either they decided that the Legia player added from himself and simply wanted to impose a penalty, or from the available repetitions they were not able to state that the contact had occurred and therefore they did not intervene.

Was Legia entitled to a penalty kick?
/press materials /

After the break, the players of Legia Warszawa left with a completely different attitude and headed for Górnik’s goal. As a result, they made up for the starts quite quickly and resulted in a 2-2 draw after goals in 52 and 54 minutes. Two minutes later, Mahir Emreli scored a 3-2 goal for Legia. The legionnaires’ joy did not last long, as the assistant referee raised the flag and was whistled burned. As the replays showed, assisting Luquinhas was in the literally minimal offside when he received the ball. This was confirmed by the VAR arbitrators, who analyzed this event in less than 4 minutes and drew the offside line.

In the 79th minute, Luquinhas fell to the ground again in Górnik’s penalty area, suggesting that he was fouled. This time judge Damian Sylwestrzak did not decide to call the “eleven” again and started the game, which the legionnaires did not like. Repeats were presented during the break and it seems that the referee’s decision was correct. Rafał Janicki, after his rival played the ball, took a step and literally hooked it slightly and “ran” a stopper on the side of the opponent’s foot. If Janicki had stepped on this foot, then we would have had an offense, and since it was a hook, we cannot consider it as reckless behavior, and therefore we cannot dictate a penalty for it.

In the 90th minute, Krzysztof Kubica scored a victory and the stadium in Zabrze exploded. As the repetitions of assisting Jesus Jimenez showed, when he received the ball he was in an offside position, which was quickly assessed by the VAR referees and in the end the goal was not recognized.

In the sixth minute of added time, Krzysztof Kubica again found himself in the Legia’s net. This time the goal was 100% correct and it was Górnik Zabrze who won 3-2 with Legia Warszawa.

David Martin is the lead editor for Spark Chronicles. David has been working as a freelance journalist.
Previous “There is currently no place in KSW for Marcin Wrzosek” – Maciej Kawulski after FAME 12
Next Riots at the office of the president in Kiev. Russia is gathering troops on the Ukrainian border. Zelensky was called upon to step down