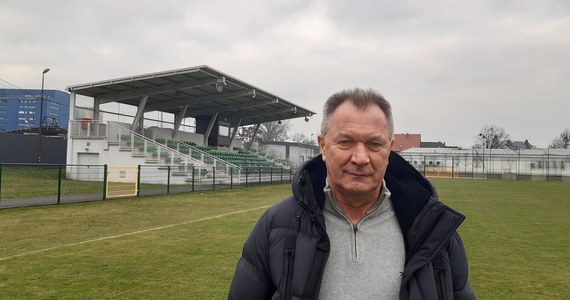 Gornik Zabrze. Lukas Podolski raised in love for the club by his father

We meet at the Concordia Knurów stadium. Waldemar Podolski played it in the years 1982-87. Then, with his family, including the two-year-old Lukas, he left for Germany.

Paweł Czado: We are talking in Knurów. I know that although you live in Germany, you feel very comfortable in Silesia. Do you keep in touch with your former club mates, especially from Knurów?

Waldemar Podolski, former footballer of Sośnica Gliwice, Szombierek Bytom, ROW Rybnik and Górnik Knurów, father of Lukas Podolski: – You could say. We have a group of four or five boys here. Every year we meet and remember the old history of the pitch. I come to them, and besides, I still have a family in Sośnica, a district of Gliwice, it is not far from Knurów. And now, when my son plays for Górnik Zabrze, there is an additional reason to come more often.

– So it is! I remember that when the Górnik match was approaching, we fans, we all walked through these fields to the stadium for three or four kilometers … Each one of Sośnica went to the Górnik match, although there was the 2nd league Piast in Gliwice at that time. But for us, only Górnik mattered, and it is still the case in Sośnica. I have been to every game he has played.

I started to appear at Górnik’s matches, of course not alone, just at the time when Włodzimierz Lubański was starting to play. [w 1963 roku, przyp. aut.]I was about eight at the time. I remember all those great players – the performances of Ernest Pohl, Stanisław Oślizła and Jerzy Gorgoń. It was a feast to be at the Górnik match back then, there were crowds at every match, it was full. I remember that I first walked with my father when I was a little older, I was 12-13 years old and we asked our friends adults to take us before we entered. “I can go with you,” we asked and we entered. And after the game, we walked home and discussed the game that had just been played, goals and situations. And in the square, everyone had a T-shirt, at least with a ten written in honor of Lubański. Górnik was something extremely important on a daily basis, the tradition of supporting was passed on from father to son.

You instilled in your son a love for Górnik?

– Yes. Łukasz was interested in this since he was a child. I didn’t take him to the game before I left for Germany, it was too small. But then there was an opportunity to get to know the old great stars, for example I told Lukas who Mr. Staszek Oślizło was for Górnik. I told him I went to his games. I also told about Włodzimierz Lubański, I mentioned that it was once the biggest football star in Poland. Or about Roman Lentner, a great winger who later became my team leader in Makoszowy’s Fight.

Exactly. You were also a footballer, in several Silesian clubs.

– First there was Sośnica, I am her pupil. Then there was Walka, Szombierki, ROW Rybnik and at the beginning of the 1980s I joined Górnik Knurów and played in it until my departure to Germany, until 1987. I remember well the beginnings in Sośnica, then it was completely different. Apart from the fact that we played, we worked normally. We were delegated from the mine – I was a full-time job in the Sośnica mine – for example to swimming pools. It was not like now, then we brought our own things to trainings …

Were you the first to become interested in football in your family?

– My father did not play, but my sister played handball in Sośnica, in the first league. When it comes to football, I was the first in the family (smile). Back then, we were all interested in football. There may have been one TV in ten families, there were no cell phones. After school, only football was played. There was one club in Sośnica, I signed up. We went with a friend, previously we only played in backyard teams. I always played attack, be it in sneakers or juniors, only towards the end coach Marcin Bochynek in Górnik Knurów made me a defender (smile).

I know that you were at the last game between Górnik and Legia on Roosevelt. How was it?

– The atmosphere was great. It was a match like before, when Górnik was playing with Legia or Ruch or Polonia Bytom … A great event, but also fulfilled expectations. The atmosphere like years ago. It was like in the old days, although the stadium looks different.

I talked about your son with coach Jan Urban before the match with Legia. He was sure that Lukas would score a goal soon, he said that he persuaded him to score in the match just like in training, where he “loads” beautiful goals.

– It happens that Lukas has a ball on his leg, he could hit, but decides to pass.

But in the match against Legia, the son scored the first goal for Górnik. Were you satisfied? Some counted him matches without a goal.

– This is the mentality of some in Poland. Lukas is 36 years old, his dream came true, he came to Górnik to help. Today – let’s be honest – this is not a team that would fight for the Polish championship. Lukas played in consecutive matches and some counted him further hours without a goal scored. There is no respect for the player. In the old days, such Lubański was more respected. It seems to me that this behavior is not okay. But Lukas has such a psyche that he doesn’t care much about it.

And the miner? He always has and will always have fans. The only thing is that twenty thousand people always come to the matches, so that it does not happen that three or four thousand people come to the game. It is known, however, that the team needs to be rebuilt, because it is not the case that one player will come and everything will change for the better. You have to wait a bit and work. Then we will see what it will be like. It seems to me that the points are good now – this is not a team for the Polish champion [w tabeli zajmuje 13. miejsce ze stratą 12 punktów do strefy dającej grę w europejskich pucharach, przyp. aut.]

The Polish league is specific. Everyone can win against everyone here. You win one or two games and you are on top, and you lose another two or three games and you are on the bottom. Cracovia is having a poor season and here it suddenly wins with Pogoń Szczecin. Or Radomiak, right at the top. There is a small point range. Personally, I don’t believe Legia could fall. Sooner or later they will start to score. They are very good in football and it was visible even in the match against Górnik. There are players who can play, it is not known what is causing the crisis.

– It deserves, and it’s not just my opinion. He deserved already last year. I do not understand why the award was not awarded then. He owes him now too. He is the best.

Waldemar Podolski, father of Lukas, at the stadium in Knurów, where he played in 1982-87
/Paweł Czado /INTERIA.PL

David Martin is the lead editor for Spark Chronicles. David has been working as a freelance journalist.
Previous Spain. A fire at a nuclear power plant in Catalonia. One person is dead
Next Artur Szpilka will change the sport discipline? The recording suggests a new direction [WIDEO]