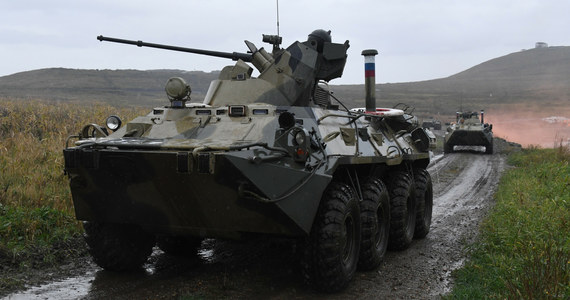 Great Britain and the USA assure Ukraine of unwavering support

Movements of Russian troops near Ukraine’s border have sparked fears in the West that Russia might be preparing an invasion. Russia has repeatedly denied that it intended to attack Ukraine. She stressed that she can deploy troops on her own territory wherever she wants, and accused Ukraine and NATO of stoking tensions.

“I think it would be a serious mistake on the part of Russia,” Truss told Reuters when asked about a possible incursion into Ukraine. – We are very close allies of Ukraine and we work with our partners in NATO, but also directly with Ukraine to make sure that it is fully supported – she added.

British Defense Minister Ben Wallace paid a visit to Kiev last week. on increasing the defense capabilities of the Ukrainian armed forces, including through the purchase of British weapons, and Prime Minister Boris Johnson twice assured his support for Ukraine during various speeches.

The situation in Ukraine is to be one of the topics of the Friday meeting between Prime Minister Mateusz Morawiecki and Boris Johnson in London.

“The United States reaffirms its commitment to the Ukrainian nation and its unwavering support for Ukraine’s sovereignty and territorial integrity,” US President Joe Biden announced on Wednesday in a statement commemorating the tragedy of the Holodomor (Great Famine).

– Ukrainians survived the horrors of the Holodomor, demonstrating their spirit and resilience and ultimately creating a free and democratic society. Recalling the pain and sacrifices of the Holodomor, the United States also reaffirms its commitment to the Ukrainian people and its unwavering support for Ukraine’s sovereignty and territorial integrity, read a statement published by the White House.

Biden stressed that the deaths of the millions of Ukrainians who died in the famine wave of 1932-33 were the result of “the brutal policies and deliberate actions of the Joseph Stalin regime”.

“This month, as we commemorate those who have been deprived of their lives, let us again commit to permanent work to prevent such tragedies in the future and to help those who suffer under the yoke of tyranny,” said the president.

Biden’s statement coincides with growing concerns in Washington over the concentration of Russian troops on the border with Ukraine and a new Russian invasion of Ukraine. According to CNN, the Biden administration is considering sending military advisers and additional arms supplies to Ukraine.

The International Holodomor Memorial Day this year falls on November 27.

During communism, Ukraine suffered from three waves of hunger: in the early 1920s, then in the 1930s and 1946-1947. The most tragic consequences were the Great Famine of 1932-1933, in which up to 25,000 died daily. people. The Great Famine occurred in one of the most fertile countries in Europe during peacetime, when the USSR exported huge amounts of grain. In Ukraine, grain and then all food were confiscated by the authorities.

“Events”: Sick and starving. Terrifying findings after the death of a one-year-old boy from Głogów
Polsat News

Videogames entered his life in the late '80s, at the time of the first meeting with Super Mario Bros, and even today they make it a permanent part, after almost 30 years. Pros and defects: he manages to finish Super Mario Bros in less than 5 minutes but he has never finished Final Fight with a credit ... he's still trying.
Previous The World Cup in table tennis. Marek Badowski beat the world champion
Next We advise on how to check the product price history