Green light for the Piombino regasification terminal: the ship in port for 3 years. The mayor: “Appeal to the TAR. Prescriptions? No, the list of requests is empty”

Green light to regasifier of the port from Piombinoin the province of Livorno. The president of the Tuscany Region and the government’s extraordinary commissioner for the work, Eugenio Giani, signed the authorization. After the preparatory works of the area where it will be positioned, the Golar ship Tundrafrom Snam“Can arrive” in Piombino, he explained Giani for which “the procedure means for 60 million Italians the lowering of bills, the possibility of offering a service and saying that gas can be obtained more easily without depending on Russia”. The mayor of the city, Francis Ferrarifrom Brothers of Italy has already announced the appeal to the Tar. Snam underlines that the authorization deed “contains, internally, various technical and procedural requirements that the company will examine in the next few days to allow the timely start of the works and do everything possible to have the operating unit within the foreseen times” . But this Memorandum does not convince the mayor Ferrari, who confirms himself at the head of the citizens opposed to the installation of the regasifier. It is “a document – says the mayor – which seems more an attempt to wash one’s conscience than a concrete tool for the revitalization of the territory. That document is one empty and distant request list from the real needs of Piombino. From that document it clearly emerges what Commissioner Giani is little updated on the history of the city and does not know the territory, its change of pace and its new needs in the slightest “. For the mayor “if Giani knew Piombino he certainly would not have chosen to be the promoter of a regasification plant in its port”.

ARCHIVE | Piombino regasification terminal, 3 thousand in procession and there are also FDI flags. “For years they have promised reclamation, now they put a bomb in port”

For Ferrari, the administrative process, as set by the extraordinary Commissioner Giani, was immediately projected to grant authorization, not to evaluate the feasibility of the work, and did not take into account the enormous critical issues raised by the Municipality of Piombino. “In addition, he even wanted to secure it through theState-Region agreement, a purely political act. The decree governing the bureaucratic process speaks clearly: the Government proposes the work and the Region guarantees the territory, also asking the Province and the Municipality for an opinion. The opinion of the municipality was obviously negative but Eugenio Giani, this time as president of the region, has anyway signed the agreement“. On this basis, according to the mayor Ferrari, the appeal to the Administrative Court of Tuscany can be built.

Snam will now be able to position the regasification vessel in the north dock of the port of Piombino, along the east quay, 300 meters long. The ship is 297 meters long and 40 meters wide. The gas range will be 5 billion meters cubes, “An important scope – underlines Giani – with respect to 29 billion which at this moment offers the gas pipeline coming from Russia ”. “Tuscany – he adds – when the ship will be in operation in mid-April, will be able to say that with its contribution, 10 billion cubic meters of gasmore than a third of what Russian gas used to be ”. 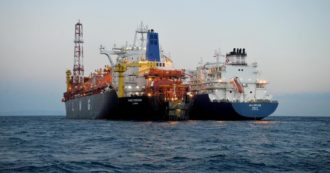 ARCHIVE | Piombino regasification terminal, green light from the Services Conference. Ferrari: “Appeal to the Tar”. Giani: “We will check security”

However, the fate of the regasification terminal remains suspended upon the expiry of the three years of stay in the port of Piombino, as promised by all the authorities to the community of Piombino. Giani reports that “Snam is working hard and not only in Tuscany to see the best points of the coast for positioning after three years of entry into service”. An area in which to establish the ship will then be identified for another 22 years. Snam has a time of 45 days from today to decide where. According to Giani, the installation in Piombino will be completed by mid-April.

The negative judgment also comes from Free together for health committee, which has so far fought – together with other associations, parties and various mayors, in a transversal sense – against the regasification plant. “We have hoped until the last – says the spokesperson Francesca Marino – Giani made us understand that in Italy the rule of law no longer applies, the Constitution now it is waste paper, democracy is only a vague memory, with the excuse of an emergency, it arrogates the right to trample the will of the citizens, despite our mayor Ferrari and his very valid and competent experts, have brought to light many critical issues. Despite everything, Giani has put that ignoble signature that will endanger not only Piombino but also half of Val di Cornia ”. “Although he stated that he would do it two environmental impact assessments he hasn’t done any not even one – Marino continues. – This is yet another very dangerous precedent for Italy, because with the excuse of any emergency the government will be able to impose whatever it wants, being above any national and European law. Piombino is the proof of this. I hope the new government can prove me wrong. We will not stop, we have lost a battle but not the war ”.

In front of the headquarters of the Tuscany Region, in Florence, the metalworkers’ unions of Livorno organized a garrison to ask for a meeting with President Giani “not against the regasifier, but to have more guarantees to be able to continue working” as the Fiom secretary explains. David Romagnani from Livorno. Yesterday the provincial secretaries of Fim, Fiom and Uilm had announced the garrison because, they explained, they did not obtain from Giani the required guarantees on the operation of the port. Eventually the meeting was agreed by the governor. The workers’ organizations reported that Giani expressed “the will to work on the creation of a provisional body with the presence of the social partners, part of the subjects of the regional technical committee, coordinated by the commissioner whose purpose is to draw up coordination plans between port operators and regasification station in order to guarantee the full operation of the port operators “. The meeting was also attended by the RSU of the Piombino Logistics and the rsu coordinators Jsw Steel Italy, the Piombino steel plant. The northern quay, the unions explain better, “is a vital and irreplaceable artery for the supply of the semiproduct essential to the current productions of steel plant. In fact, the news of the award by Jsw of two batches, about 400 ml, of supply and production of rails for State Railways, the semi-product of which arrives from the Indian factories of Jsw right through that quay ”. The meeting with Giani, the unions conclude, “constructive and profitable, was useful in creating the conditions for coexistence of the existing work on the port and the needs of the country in terms of energy security”.

Videogames entered his life in the late '80s, at the time of the first meeting with Super Mario Bros, and even today they make it a permanent part, after almost 30 years. Pros and defects: he manages to finish Super Mario Bros in less than 5 minutes but he has never finished Final Fight with a credit ... he's still trying.
Previous Inter, the probable formation against Plzen: Inzaghi relies on fixed points. Only one doubt | First page
Next Run all night: plot and cast