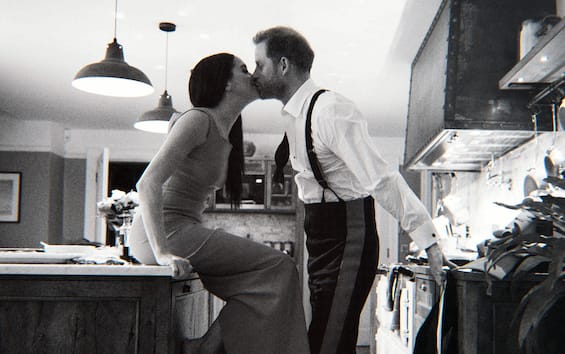 Harry & Meghan, the reaction of the English newspapers to the Netflix TV series

After the release of the first 3 episodes of the Netflix docuseries dedicated to the Dukes of Sussex, British newspapers express great discontent. Indeed: a real fury. “They want to bring down the monarchy”, this is the message that emerges from the national newspapers of Great Britain. The first part of the documentary dedicated to Harry and Meghan creates ill will everywhere: in the first place the Royal Family is clearly worried, but also the tabloids and the British Conservative establishment are displeased

The release of the first part of the documentary Harry & Meghan does not like the subjects of King Charles III.
The litmus test of discontent is the reaction of English newspapers to the television series that has just landed on Netflix (also visible on Sky Q and via the app on the Now Smart Stick).

The British newspapers express great discontent, indeed a real fury. “They want to bring down the monarchy”, this is the main message that emerges from the national newspapers of Great Britain. The first part of the documentary dedicated to the Dukes of Sussex is creating ill will everywhere: first of all, it is clearly the Royal Family who are worried, but also the tabloids and the British conservative establishment are very displeased.
There is talk of a real clash between the Royal Palace and Netflix, as well as a real war between the brothers: William is absolutely (and understandably) angry with his younger brother.

And a Tory deputy exhorts in these hours: “Now a law to wrest the royal titles from those two”.
The opening of Daily Mail of three days ago, after the release of the first act of the docu (arrived on Netflix last December 8) was the following: “They want to bring down the monarchy”, we read. The newspaper, writing thus, cited sources of the Royal Family English.

Uk, parliamentarian against Harry and Meghan: their royal titles must be removed

The documentary show Harry & Meghan landed on Netflix just four days ago (also visible on Sky Q and via the app on the Now Smart Stick). For now, the first three episodes of the six total arrive on the streaming platform. And the fact that this first part of the show worries the United Kingdom so much heralds that for the second act (the last three episodes) we will see some good ones… Usually the most succulent things, in fact, are held for the grand finale. And this too, perhaps, is the fear of King Charles III and his family.
Conservative MP Bob Seely suggested the following: “Take away the royal titles from those two!”. He would have in mind to propose a bill in the House of Commons precisely to remove the title of royal from the Dukes of Sussex.
“This is not a private matter, but a political matter,” Seely said.

For now, the Royal Family has not made any official statements

Although for now the Royal Family has not made any official statements on the matter, it should be emphasized that al times some senior representatives of the British royals have made it known that no one from the production would have ever contacted Harry’s famous family, to get a comment, a reply or anything else. “No one has contacted us,” they said in a statement entrusted to the times.
This therefore would contradict what Netflix declares, namely: “We have asked the Royal Family to comment, without success”.
These words of the streaming platform that produces the series are therefore classified by representatives of Buckingham Palace as “lies”.
“A lie”, say some insiders of the Royal Palace. “We have only been contacted by an independent production company whose veracity we could not verify, not by Netflix,” they added.
What can be deduced from the statements of the sources of the English royal family is that the Americans who produce this show would have sent an interlocutory company to knock on the royal door, entrusting it with the task of collecting comments. Furthermore, it seems to insinuate that the reason for choosing an interlocutory company instead of Netflix was precisely that of not receiving comments on the matter…

Harry & Meghan, the docuseries on the Dukes of Sussex is coming. The trailer

Since these first three episodes of the television series Harry & Meghan several direct attacks on the Royal Family appear. To enrich an already very succulent product there are also details and curiosities that until now the public did not know, for example how the Dukes of Sussex met; the rumors of their first meeting; the various gaffes of the then neo-duchess Meghan relating to etiquette, one above all the way to bow before the Queen. There is also talk of “death threats” against a crying Meghan.
In these hours the British conservative newspapers write in no uncertain terms that it is an “attack on the image of Elizabeth II”. And it is surprising to hear the famous royal commentator Robert Hardman say: “At least the Queen has not had to endure and see all this, fortunately”.

According to Daily Expresswho consulted sources close to King Charles III, the family “is deeply shaken”.

In this docuseries the Royal Family is defined as a microcosm where “women suffer”.
Meghan says her brother-in-law William, his wife Kate and everyone else are ‘so overly formal, even in private’. Harry, for his part, declares that “there are unconscious prejudices” among the family members.

Furthermore, the second son of King Charles III seems to attack his father between the lines, for example when he says: “Friends in Africa are the ones who made me grow”.
Harry recounts what his family’s reactions were when he introduced them to his future wife. “Everyone was surprised that I, the redhead, had done something good…” says the prince who calls himself “spare”, i.e. “the spare wheel”. This is also the title of the biography of the Duke of Sussex, to be released on January 10 (and also greatly feared by the Royal Family).

William is very angry with his brother

Award to Harry and Meghan, one million for attending the dinner

It was to be expected: William is furious with his brother and sister-in-law, according to the words of the Daily Mirror. The main reason for the eldest’s resentment towards his younger brother? It’s about the mother, Diana.
At the beginning of the first episode of the docuseries, Harry declares that his and his wife’s lives have been ruined by the paparazzi, just like his mother, who died on August 31, 1997 in Paris.
And he goes on to say: “I had to protect my family, so that this would not happen again. I am like my mother, I make decisions with my heart. And Meghan also reminds me a lot of Diana: she has the same compassion, empathy and security”.

It seems that William will never forgive this combination, say the commentators on social networks. Furthermore, the fact that the interview with Lady D broadcast by the BBC in November 1995, extorted by deception according to the Royal Family, is another note of demerit that William will mark in large letters on his brother’s record.

The accusation of endemic racism

Meghan Markle talks about Queen Elizabeth again after her death

Harry & Meghan it also accuses the UK of endemic and colonial racism.
What Queen Elizabeth has been working on all her life, the Commonwealth, is referred to as “the British Empire 2.0”. These are the words that are heard from the narrative voice of the Netflix docuseries.
“It is evidently a direct and frontal blow to our dear sovereign,” writes the Telegraph. The British newspaper then defines the two dukes of Sussex “as unjust as their half-truths”.
The Sunhowever, states that “Harry ‘the nasty’ (the villain) is manipulated”.

Finally even The Guardian (who usually turns out to be less of a “bite” and more understanding, even and above all towards the least of princes) spends harsh words towards the docuseries, writing that “his breakfast went sideways” in front of such a dose of narcissism .

Harry and Meghan, the first photos after the portrait of the royal family

Photographer Misan Harriman published two images of the Duke and Duchess of Sussex on his Instagram profile a few days after the official photo released by Buckingham Palace with King Charles III, Queen consort Camilla, Prince William and his wife Kate Middleton. One in black and white and one in colour, the shots date back to 5 September – three days before the death of Elizabeth II – when the two were in Manchester for the One Young World summit

A few days after the publication of the first portraits of the royal family after the death of Queen Elizabeth IIthe new official photos of the Duke and Duchess of Sussex also arrive, Harry and Meghan Markle. The images were taken by Misan Harrimantheir trusted photographer, just a few days before the ex-monarch’s disappearance at the summit One Young World in Manchester

In the two photos, one in color and one in black and white, Harry and Meghan are seen together hold hands backstage at the summit, the first public event they attended in the UK since – in 2020 – they abandoned their institutional duties as part of the royal family. ‘A picture speaks for a thousand words‘, goes an Anglo-Saxon saying: ‘A picture is worth a thousand words’. It is the same in this case, at least according to the expert of body language Judi James

To the SunJames underlined how the two shots seem to want to give an institutional image of Harry and Meghan, united and with a tone of “presidential couple”. It does not go unnoticed that in both photos it is Meghan to be always on top. In the color one, James says, the husband’s body language expresses support and closeness to his wife. In the black and white one, in profile, the gaze of the two directed upwards would instead suggest that they are looking to the future

David Martin is the lead editor for Spark Chronicles. David has been working as a freelance journalist.
Previous Qatar World Cup, here’s how much the ticket for the final costs. Skyrocketing prices
Next Clash of the titans: plot, cast and sequel to the film with Sam Worthington