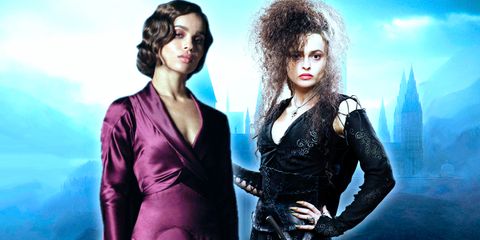 Harry Potter: How are Bellatrix and Leta Lestrange related?

When fans heard the name of Leta Lestrange in the spinoff of Harry Potter, Fantastic Beastsimmediately wondered about his relationship with the notorious Bellatrix Lestrange.

As most faithful servant of VoldemortBellatrix has committed heinous acts in his name, including the murder of the godfather of Harry Potter and his cousin, Sirius Black. Leta Lestrange she was less evil than her distant relative, but still carried with her the dark nature associated with the Lestrange family name.

The familial bond of Leta and Bellatrix is ​​not as easy to pinpoint as that of most blood relatives Harry Potter. Leta’s actress, Zoë Kravitz, stated that she played a great aunt of Bellatrix. However, there is little evidence of this. Born as Bellatrix BlackBellatrix married into the Lestrange family, which means she and Leta are not related by blood. This causes Leta to be related to Bellatrix’s husband, Rodolphus Lestrangealthough this link is not easy to find.

Leta’s only known sibling was her little brother Corvus, whom she drowned by mistaking him for a quieter child on a sinking ship. With her and Leta’s deaths are the only known bearers of the Lestrange name in the films of Fantastic Beasts. However, the Lestrange name survived, probably through a distant relative of Leta’s father, Corvus Lestrange IV.

The direct ancestor of Rodolphus, Radolphus Lestrangewas Minister of Magic for Great Britain and Ireland from 1835 to 1841. This means that the Lestrange family had already settled in Great Britain in the 1830s. Corvus Lestrange IV he still resided in France in the 1920s and died there shortly after sending his children away. Therefore, the Lestrange line must have broken away some time before Radolphus’ tenure as minister.

The problem with trying to pinpoint where the separation occurred is the lack of information about the family line of Rodolphus Lestrange. A Lestrange attended Hogwarts with Voldemortas shown in Harry Potter and the halfblood Princewhich means that Tom Riddle he may have attended school with Rodolphus’ father. The only other canonical ancestor is Radolphus, dating from the 1830s or 1840s.

However, there is a chance through the bloodline of Cyrille Lestrange I. She was the sister of Corvus Lestrange I, the great-great-grandfather of Leta Lestrange. He had his own offspring, which ended with Nozea Lestrange, who in 1927 was unmarried and childless. Rodolphus could be descended from this branch of the Lestrange family, but this is unlikely. Corvus Lestrange I was born in 1729, so his sister Cyrille would also have been born in 1700. Ma Radolphus Lestrange he does not appear anywhere in the Cyrilles’ family tree, which dates from between 1700 and 1900, although he was Minister of Magic in the 1800s.

Bellatrix and Leta Lestrange may only be distantly related

It is possible that Radolphus was eliminated from the Lestrange family tree, just as the Blacks did with Sirius when he ran away from home. The Lestrange family was known for practicing the Dark Arts. Any member who deviated from this practice was considered a blood traitor and removed from the family tree. Radolphus’ stint as Minister of Magic may have been seen as his attempt to uphold the law. However, it is more likely that he is simply descended from another line of Lestranges that split off further back.

The bond between Leta and Bellatrix is ​​distant, at best. Perhaps, like the anachronic apparition of the Professor McGonagall in Fantastic Beasts 2, the bloodline of Leta and Bellatrix has not been thoroughly researched and inadvertently created a plot hole. Or perhaps the Lestrange lineage is simply so ancient and has enough branches that Leta and Bellatrix could be distant, repeatedly estranged cousins. Either way, one thing is certain: Bellatrix and Leta both carry the dark history of the Lestrange name. But while Bellatrix died fighting for her Dark Lord, Leta met an untimely end of her own as she sought to escape her family’s legacy and save the people she loved.

David Martin is the lead editor for Spark Chronicles. David has been working as a freelance journalist.
Previous the goal difference condemns Martino’s men
Next ‘Horrendous how they were treated’ I Sky TG24