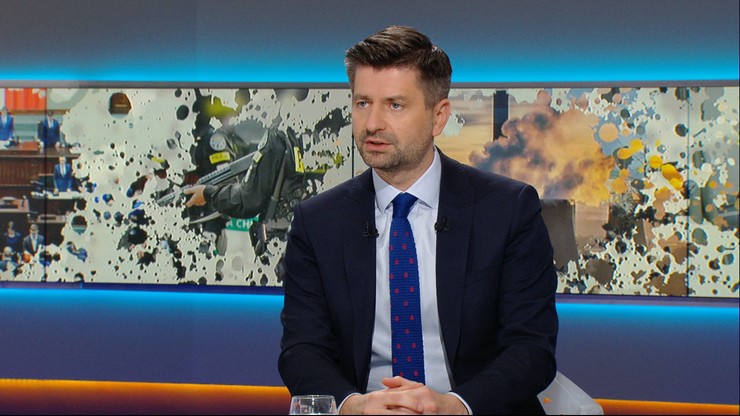 “He runs like a headless chicken.” Śmiszek about the diplomatic offensive of the prime minister

Krzysztof Śmiszek, when asked if he liked the diplomatic offensive of the Polish authorities, replied that he would like to see it a few months ago. – Today it is a bit of a panic running around Europe – he said.

– The English have a saying “run like a headless chicken” and I have the impression that Prime Minister Mateusz Morawiecki drives around this Europe like this headless chicken – added the deputy chairman of the New Left.

In recent days, Morawiecki met with the leaders of Lithuania, Latvia and Estonia, as well as the prime ministers of the Visegrad Group countries and the Prime Minister of Croatia. On Thursday, he will meet German Chancellor Angela Merkel, and on Friday with the Prime Minister of Great Britain – Boris Johnson.

Krzysztof Śmiszek: The Ministry of Foreign Affairs does not exist

Krzysztof Śmiszek decided that “let (the prime minister – ed.) Drive, let him establish contacts, but whether such a diplomatic offensive is organized when the milk was spilled, or our services did not know 3-4 months ago that something like this was being prepared by Lukashenka? – wonders Śmiszek .– Too late, too little, compulsively and without a plan – this is how MP Krzysztof Śmiszek assessed the diplomatic offensive.

He added that “unfortunately it happened that diplomatic talks were started above our heads and continued”.

– We have calls to Lukashenka from Chancellor Merkel and we can assess it differently, we have talks at the EU-US level, we have really started many initiatives, but without us – assessed Śmiszek.

– In my opinion it is not okay, and it is not the fault of the EU or the USA but the negligence of the government – he said. Śmiszek wondered if the audience remembered “what is the name of the minister of foreign affairs?”, Considering that he had recently had health problems, he replied that “Zbigniew Rau also has deputies”.

– I put forward the thesis that the Ministry of Foreign Affairs does not exist, Polish diplomacy is in disarray and the fact that we are at war with the EU does not help us, and that at the time of crisis Prime Minister Morawiecki says “let’s forget about the rule of law,” said Śmiszek.

Krzysztof Śmiszek: The Polish border has holes like a colander

The state of emergency at the border ends in a few days. Commissioner Johansson wants to meet with Minister Kaminski and appeal for humanitarian organizations to be admitted on the Polish side of the border. When asked if it was a good idea, the MP from the Left stated that “this is an absolute condition for introducing some civilized policy on the border.”

He added that “humanitarian organizations must be there. I do not know how the Polish government would curse the reality by saying that the Polish border is tight, but it is still full of holes, like a colander, because we already have 10,000 migrants who have gone to Germany”.

– I do not touch on the topic of admitting or not admitting migrants. If a man in Poland is in a tragic situation and in a dire health condition, he must be helped – said Krzysztof Śmiszek. He added that “if we have removed journalists, we are doomed only to Lukashenka’s or the government’s message.” – The presence of humanitarian organizations is necessary because it is an expression of the civilization level of our country. People cannot be allowed to die at the border in Poland, assessed the vice-chairman of the New Left.

Marcin Fijołek asked the MP from the Left about a meeting on the pandemic convened by the Marshal of the Sejm, Elżbieta Witek. – It looked nice, but the effects are none – assessed Krzysztof Śmiszek. The deputy chairman of the New Left called the meeting “a PR act and a trick.” I would expect a serious speaker of the Sejm that if she can invite everyone, she has something concrete, said the deputy.

– Yesterday everyone met, two hours of drinking coffee, eating cookies, talking about the importance of fighting the pandemic and everyone went to their offices – he added. – I would expect from those who have expert knowledge, rule the country, have access to statistics and practices from abroad, that something concrete will be put on the table – he said.

When asked about the bill on the verification of vaccinations by the employer, he replied that “the law, if it was not so, is not there”. – We are starting to call this law “Yeti” because no one has seen this project. – We have covid passports, let’s make use of them. Poland is the only country that does not check its citizens in terms of vaccination – admitted the vice-president of the New Left and called for us to “finally give the prize to those who are responsible and vaccinated”.

More editions of the “Graffiti” program are available here.

Videogames entered his life in the late '80s, at the time of the first meeting with Super Mario Bros, and even today they make it a permanent part, after almost 30 years. Pros and defects: he manages to finish Super Mario Bros in less than 5 minutes but he has never finished Final Fight with a credit ... he's still trying.
Previous The former Italian representative will be behind bars for a long time! A job for the son of a mafia boss called Football
Next PC or consoles? The verdict has just been reached. The war has been settled