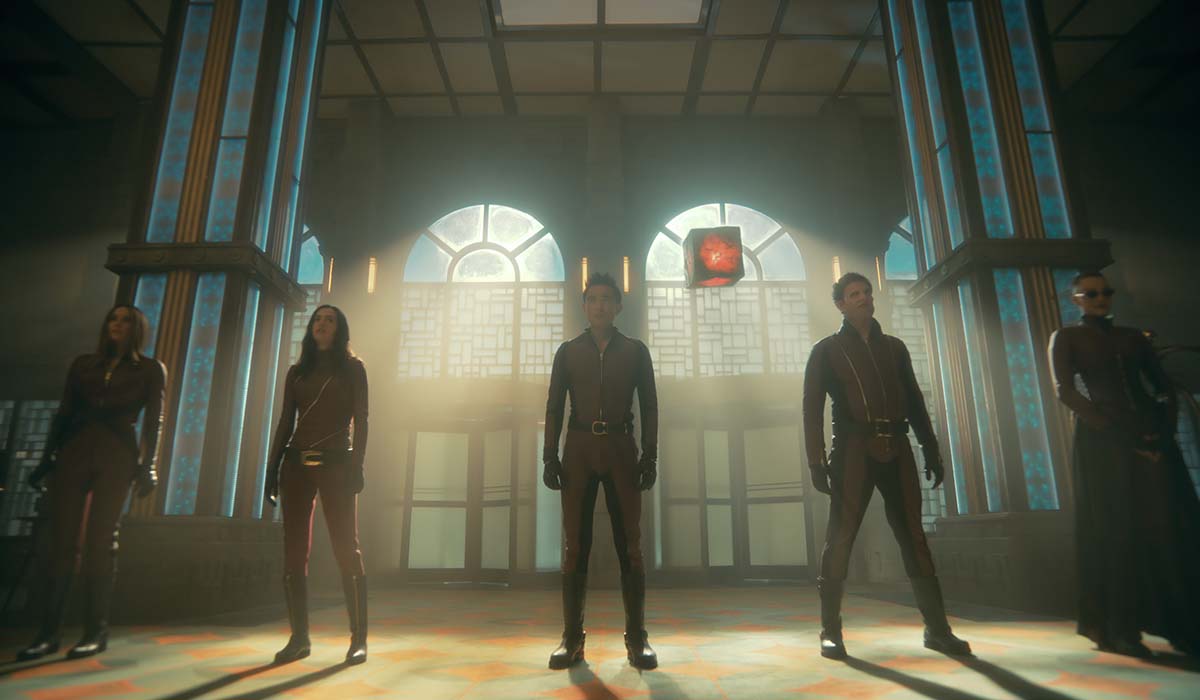 How The Umbrella Academy ends 3

How The Umbrella Academy ends 3

How it ends The Umbrella Academy 3? On the occasion of the debut of the third season from 22 June 2022, here is the summary of the tenth and final episode of season 3 entitled “Oblivion“. This completes the journey of Luther, Diego, Allison, Klaus, Number Five, Ben and Viktor struggling with Kugelblitz.

ATTENTION: the following is the full explanation of the the final of the third season from The Umbrella Academy and includes big ones spoiler about everything that happens. If you haven’t finished watching yet of the second season or you do not want to spoil the surprises, we advise you not to continue reading. If you want to find out how it ends The Umbrella Academy 3here you will find the full storyline.

What is the Oblivion Project

A flashback reveals that the Obsidian hotel was built in 1918 by Sir Hargreeves, the father of the Umbrellas and the Sparrow, who is today the owner of the hotel. To stop the apocalypse, Reggie has a plan and addresses the children: “There is a portal into the universe. I built the Obsidian hotel around it, and on the other side is the answer”, He tells them, proposing to venture into the conduit that starts from the White Bison suite. Put to a vote, Reggie’s plan does not go through causing disappointment in Allison.

Going to his father to apologize for voting “no”, Luther hugs Reggie but the latter betrays him by stabbing and killing him. This will be the pretext he intends to use to persuade his children to go the other way, by staging Luther’s mysterious murder. “The best way to bring a family together is at a wedding or funeral“ Reginald says to his dying son. The plan works, and no one suspects it was Reginald who killed Luther. Everyone crosses the threshold of the door, but Reggie shuts it in Klaus’s face: his father tells him that he is a troublemaker and it is not worth having him with them.

Arrival at the Oblivion hotel

On the night of Sloane and Luther’s wedding, Allison struck a deal with Reginald: it was she that Cinque had heard talking about, in the White Buffalo’s room. While Ben, Cinque, Diego, Lila, Allison, Viktor, a desperate Sloane and Sir Reginald they went through the door, Klaus stays in the room with Reggie’s corpse and throws himself at the white bison head and is pierced by one of its horns as the Obsidian hotel disintegrates all around them.

Doubts about Sir Reggie’s intentions begin to emerge: something is wrong with the mysterious deaths of Klaus and Luther. Arriving at the Oblivion Hotel, Viktor and Cinque suspect him and Allison, while she consoles Sloan. In the afterlife, Luther tries to convince Klaus to use his powers to return to the world of the living and help their family.

The legend of the seven bells

We need to get to work, and Sir Reginald already has a plan regarding “the legend of the seven bells” and Norse mythology. Need track down the Seal which is the key to the seven bells. Once found, the two families will be one step away from reset the universe. We split up to search: Sloane and Ben, Viktor, Cinque and Allison, and Diego and Lila. Meanwhile, Sir Reginald stares at the bell at the reception which, if rung, invokes the mysterious Guardian.

Meanwhile, Klaus appears in Oblivion arousing the astonishment of Reginald Hagreeves, who did not expect to find his son in the Void. After saying that killing Luther was “necessary”, Reggie intends to “get his reward” and gets rid of Klaus by stunning him with a blow to the head. Sir Reggie rings the bell and Oblivion is bathed in an eerie yellow light.

There is not just one guardian patrolling Oblivion: each of the three groups – Sloane, Ben and Cinque, Viktor and Allison, and Diego and Lila – are chased by a different warrior who wears a samurai armor and wields razor sharp weapons. As they fight the new threat, Allison vows to Viktor that she has nothing to do with Klaus and Luther’s deaths, but she needs her brother to believe her: apparently, she Allison has a plan to save. the families. Diego, meanwhile, puts Lila in safety to save the child she carries in her womb. Meanwhile, Ben, Sloane and Cinque manage to kill a Guardian.

Lila and Viktor they join forces and use their powers together to fight the guardian who lunges at them, knocking him out. In the lobby, Lila, the Sparrow and the Academy gather around Klaus who is surprisingly alive. Klaus reveals that Reginald killed Luther, keeping Klaus out and rang the bell. Meanwhile, Cinque understands that the Seal is made up of the stars on the lobby floor, but before revealing it, he breaks in the last samuraiwho cuts off his arm and lashes out at the rest of the family, decimating them.

When all seems lost, Luther arrives to rescue Sloane and destroys the last samurai. Number One confronts Reginald for all the years he wasted on the moon. “I left you with the most precious thing in the Universe,” Reggie says, referring to Abigail’s body. But no one knows what he is talking about. Unfortunately Luther won’t stay there long: his appearance is due to Klaus’ powers that have allowed Luther to return one last time. “I will love you for all eternityHe tells Sloane before disappearing into his arms.

Lila, Sloane, Ben, Viktor, Klaus, Diego and Cinque are the seven bells: they must position themselves so that they can reset the universe. Reginald doesn’t want Allison to get into position and tells her to stand still just before the samurai attacks again. The mechanism is activated and the samurai disintegrates into a thousand insects. All around Oblivion is sprinkled with a blinding light around them. Reginald goes to a console while the energy of his and Lila’s children is being drained.

The machine to reset the universe

Reginald explains that the machinery can stop working without them, because they are stuck in another dimension inside a machine built by the creator of the universe. They have no time to waste: the particles within the seven are the fuel of the machinery. Allison witnesses the scene in disgust and tells her father to stop them: Cinque warns her – Reginald won’t stop until they’re all dead. “Everything has a price”Hargreeves tells Allison, who uses her power to try to stop her father but in vain.

Allison takes the Guardian’s scythe and cuts off her father’s head, revealing that it is actually a cyborg. The seven are on the ground, exhausted. Now she is in control of the universe. Viktor begs Allison not to touch the red button, but she asks him to trust and so does. Allison presses the red button and everything shuts down.

We go back home

On a rainy night, Allison reaches her home in a taxi and finds her daughter Claire asleep in her cot. She doesn’t stop there: Allison also hugs Ray, who appears at her door. Meanwhile, Five (with the arm), Lila, Viktor, Diego (who has fingers again), Klaus, and Ben they emerge from an elevator into what they discover to be Obsidian Memorial Parkdonated by Sir Reginald Hargreeves (whose bronze head towers over the plaque) to the city on October 1, 1989. They are therefore located where the Obsidian Hotel was built, which is instead a park.

Also comes out of the elevator Luther, who is alive and well and is no longer simian: his body is normal. Of Sloane, however, there is no trace. Cinque has lost her powers: she can no longer jump. Everyone else seems to lack their abilities too.

Luther he runs off in search of Sloane while the other brothers try to figure out how to manage their new mortality. Also Well walks away, while Lila and Diego foretaste their new normal. Cinque also runs away, and Viktor stands alone in front of Hargeeves’ head, then leaves. All the Hargreeves have gone their separate ways.

Meanwhile, the profile of the city is very different. Many skyscrapers bear the name of the family, with signs such as “Hagreeves Financial” illuminating the night. From the tallest tower that bears the initials Hagreeves Enterprises, Reginald Hagreeves – alive and well – gazes at the streets below as he Abigail stands beside him and shakes his hand. The two look at each other with an accomplice and return to observe the city they dominate.

Who is Abigail Hargreeves

Who is Abigail Hargreeves? Sir Reginald’s wife, played by Liisa Repo-Martell, allegedly died before 1911, leaving an unbridgeable void in Reggie’s life. As it emerges in the ninth episode of the third season, her body is stored in a cryogenic tube on the moon, protected by a force field that Luther cannot penetrate during his mission. In the finale, Abigail does not abandon Reginald’s side: the couple observes the city intently.

What happened to Sloane

What happened to Sloane? Luther’s wife was with the rest of the group while Allison, after neutralizing Reginald Hargreeves, was about to press the famous red button to reset the universe. By the time they returned to the present, Sloane was lost track. Does Sloane no longer exist in that reality? And if it still exists, has it retained its powers or has it lost them like the rest of Umbrella and Lila? This is not clear yet, but we will find out soon.

What happened to Stan

Another mystery concerns the disappearance of Stan, the boy Lila passes off as her and Diego’s son. After being disintegrated by one of the waves of the Kugelblitz, nothing has been heard of Stan. Does it still exist after the universe is reset? This is not yet clear. Certainly the introduction of the character was aimed at the twist of Lila’s pregnancy, but knowing the series it is difficult for the character to remain suspended without finding a solution in the next episodes.

David Martin is the lead editor for Spark Chronicles. David has been working as a freelance journalist.
Previous Letícia Hally counts with the special participation of ZAAC and Vitão in the video for her new single, “Gostei” – Portal Famosos Brasil
Next Rafaella Santos on the emergency landing of Neymar’s plane: “Baita sto”