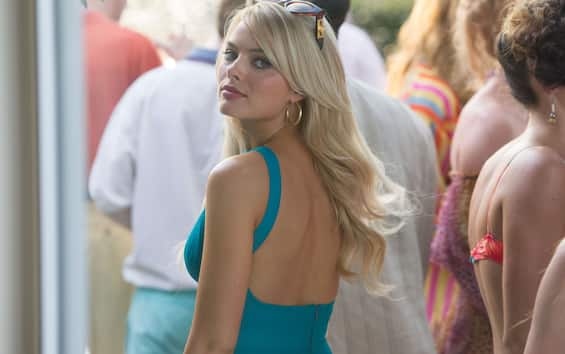 ‘I drank tequila before filming with DiCaprio’

Almost 10 years after the release of The Wolf of Wall Street, Margot Robbie makes a revelation about her part in the film

The Wolf of Wall Street is a film released in theaters in 2013: almost ten years have passed since the release of one of the most successful films of the 2000s and, after so many years, Margot Robbie made a shocking statement regarding one of the most famous scenes in the film, the one in which she is seen engaged in an embrace with Leonardo DiCaprio. Eroticism and passion are the main elements of that moment, which has remained engraved in the memory of the many who have seen the film. And today, having gained even more experience and courage, Margot Robbie made an unexpected statement that sparked a surge of irony.

Martin Scorsese, a journey through the masterpieces of the director born 80 years ago

The Wolf of Wall Street was the first important film by Margot Robbie, who at just 23 was catapulted into a blockbuster production with Leonardo DiCaprio and directed by Martin Scorsese. Not a small emotion and responsibility for such a young actress, who in fact revealed that she was very excited during all the filming. During the Baftas, Margot Robbie reflected on the opening scene of the film, which saw her protagonist in an iconic walk naked, wearing only stockings and an absolutely sexy pair of shoes. “I won’t lie to you, I had a couple of tequila shots before that scene because I was nervous, very, very nervous,” explained Margot Robbie, who also revealed that she didn’t think that scene would attract so much attention, catapulting her into cinema “of the greats”.

Perception on The Wolf of Wall Street by Margot Robbie

When Margot Robbie agreed to play that role in The Wolf of Wall Street she didn’t think that film would be so successful. That was his first movie American and the limelight were something completely new for her who, at 23, discovered the lights of Hollywood. “It kind of doesn’t matter what I do in this movie because everyone is going to focus on Leo and everything,” she thought. Instead, in addition to focusing on DiCaprio, that film has turned the spotlight on her. Despite that perception, Margot Robbie felt extraordinarily comfortable in the role and backstage in the film, so much so that she shared her ideas with Martin Scorsese and Leonardo DiCaprio to find new solutions that could improve the film.

From Profumo di Donna to Wolf of Wall Street: 10 films shot in Liguria

Not only the port and carrugi of Genoa: the east and west coasts have attracted many international productions. Here are the most famous films 10 FILMS SET IN SICILY

“The Day of the Jackal” (Fred ZInnemann, 1973). The thriller about the assassination attempt on General De Gaulle is a long tour of Europe which towards the middle of the story also stops in Genoa, where the protagonist (Edward Fox) has a craftsman make a sniper rifle that can be disassembled. We see the Jackal stop at the Genova Principe station and walk through the alleys of the city.

“Scent of a woman” (Dino Risi, 1974). The retired captain Vittorio Gassman, who is blind, boldly crosses the pedestrian crossing: “We are in Genoa, a civilized city. They will stop”. The Ligurian capital is the first stop on his journey to Naples: the young Giovanni, who accompanies him, is in charge of getting him a prostitute and finds her in Moira Orfei sitting at a table in the Caffè Splendido (now Caffé degli Specchi), walking on Pollaiuoli ascent.

“Stregati” (1986) is the third film directed by Francesco Nuti, a night disc-jockey who lives a perhaps impossible story in Genoa with a splendid Ornella Muti one step away from marriage. Many locations: from the Mercantile Port to the Old Port, from Piazza De Ferrari to via XX Settembre, from via San Luca to Largo Zecca (seat of red light cinema), etc.

David Martin is the lead editor for Spark Chronicles. David has been working as a freelance journalist.
Previous The best TV series and the best movies to watch on Apple TV+ in 3 months for free :: Blog on Today
Next “Voices in the shadows” is back to reward dubbing masters – Cinema