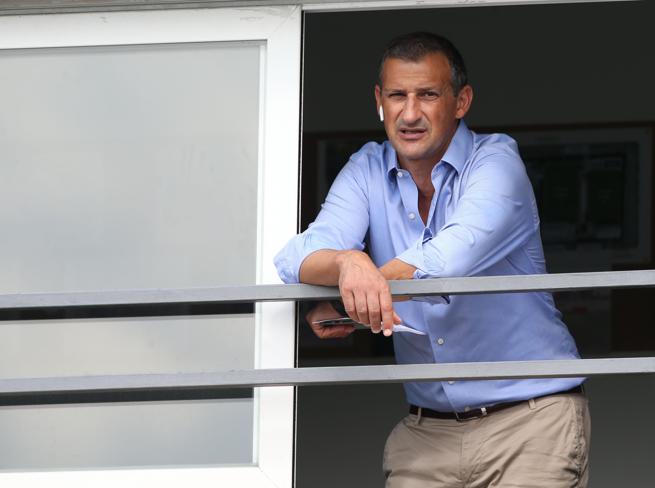 “I instinctively disarmed him, but I’m not a hero” – Corriere.it

from Monica Colombo and Andrea Sereni

Former Napoli, Inter and Bologna defender: «I was in the wrong place at the wrong time but I did the right thing to protect my wife and daughter. I’m shocked “

“I was not psychologically prepared to face a tragic event like what happened before my eyes Thursday in Assago. You have to believe me when I tell you I’m having a hard time talking about it, and not just because of what I’ve seen. I would like to avoid passing for someone who steals the show from the protagonists. I’m fine, but there are people in the hospital (like Pablo Marì of Monza, ed
) and even one that didn’t make it“.

Massimo Tarantino should in theory be accustomed to the spotlightif only because before becoming a sports manager he was a defender of Napoli, Inter and Bologna among the various teams, with also a spell at Monza at the end of the eighties, ironically. He has been responsible for the technical area of ​​Spal until last June 30th. “Then I did not continue the collaboration relationship.” Thursday night she was at the mall where she played a not secondary role in stopping Andrea Tombolini.

Let’s rewind the tape.
“I was with my wife Tatiana and my 22-year-old daughter Giorgia at the supermarket shopping. We were standing in line at the checkout with the trolley when we heard screams ».

Was he scared?
“At first there was silence, because we all began to wonder what was going on. Then a person with a bloodstained shirt came out. At that point panic was generated, there were people running away to the right and left ».

Yet the worst had not yet happened.
“Unfortunately not. In the general stampede a man with a knife in his hand ran in my direction, until a Carrefour employee stood between me and him. And he took the knife. “

What did you think?
“It was a matter of moments, there was no time to rationalize. I simply kicked the attacker’s arm and sent the knife flying off. At that point I immobilized him until the police arrived and took him into custody ».

Excuse me, but weren’t you afraid for your safety?
“It was an irrational move, I’m not trained. I didn’t run away because my primary instinct was to protect my wife and daughter. I just tried to disarm him. ‘

What did Tombolini say when he pinned him to the ground?
«He was screaming, but everyone was shouting at that moment, nothing could be understood. There was general chaos. Then when he was disarmed he remained motionless, you could see that he was not lucid. The agents arrived shortly after, even if at the moment I don’t have a good sense of time ».

Didn’t the attack on Luis Fernando Ruggieri take place in front of you, then?
“No, because it happened in the central aisles of the supermarket. I think it happened when we heard the first two or three screams, that is, at the moment of the first stabbings. Only later did panic arise in the checkout area ».

Did Milan find itself unprepared for the gesture of a madman?
“We all have been. We talk about the ordinary life of people, queuing with the trolley at the checkout. But, I repeat, I am especially upset for those who have not made it, for their family and for those who have suffered injuries ».

What do you feel now?
«I don’t feel like a hero, on the contrary, to be honest, I feel discomfort in finding myself at the center of attention. I just think I did the right thing after being in the wrong place at the wrong time. ‘

Will he be able to return to the aisle of a supermarket or will he choose home delivery?
“Look, I’m 51 and I’ve been shopping in hypermarkets all my life. An episode, even if devastating, cannot affect my life and that of my family. He cannot rob us of our daily lives ».

David Martin is the lead editor for Spark Chronicles. David has been working as a freelance journalist.
Previous Immunity, vaccines and adverse events: an Italian study in the Journal of Clinical Medicine
Next Assago, the video of Andrea Tombolini’s seven minutes of madness at the shopping center