“There was a little bit of everything on the bill,” wrote Jeff Howry of Daily Utah Chronicle. «Excellent music, a couple of veterans from the 60s, a poet ahead of the age of the Beat Generation, a living legend. An unforgettable evening ».

It was a concert full of unique moments for Dylan: the first public performance of Lily, Rosemary and the Jack of Heartsthe first since 1965’s Gates of Eden and, according to the reviews of the time, a very rare version of Black Diamond Bayfrom Desirewhich had never been heard before and will never be heard live again.

Apparently, there are no recordings of that concert, which makes it even more legendary and the object of fan desire for nearly half a century.

“Wanted” it read advert in a newspaper March 1977, ten months after the show “audience recordings, photographs, newspaper clippings from Bob Dylan’s May 25, 1976 Rolling Thunder Review concert in Salt Lake City. Exchanges are made “.

Bob Dylan’s return to San Lake City today, for a concert at the Eccles Theater, inspired a group of avid fans to join forces and try to track down anyone with a recording of the concert through a new website and social media. 1976.

“It would be great if someone kept a recording of that historic event so that everyone could hear it,” they write on the website Do You Have It? (or: do you have it?). “It has happened in the past that an old box popped out of an attic or a cellar. So ask family, friends, anyone, even those who will come to the concert on June 30 in Salt Lake City. Anyone who has a recording or has any clue to recover it can write to missing@doyouhaveit.info or contact us on Twitter and Facebook ».

Leading the company are Dag Braathen, a great fan of Dylan, and another fan who has asked to be called by his name on Twitter, Dylyricus. “Salt Lake City is the holy grail of lost tapes,” says Dylyricus. “We are certainly not the first to look for it. But now we have the means of the 21st century at our disposal: the doyouhaveit.info website; Twitter, Facebook and Instagram; the Expecting Rain news page. We are sifting through online archives and fanzines to verify existing information and look for new ones. We are also making targeted ads on Facebook ». 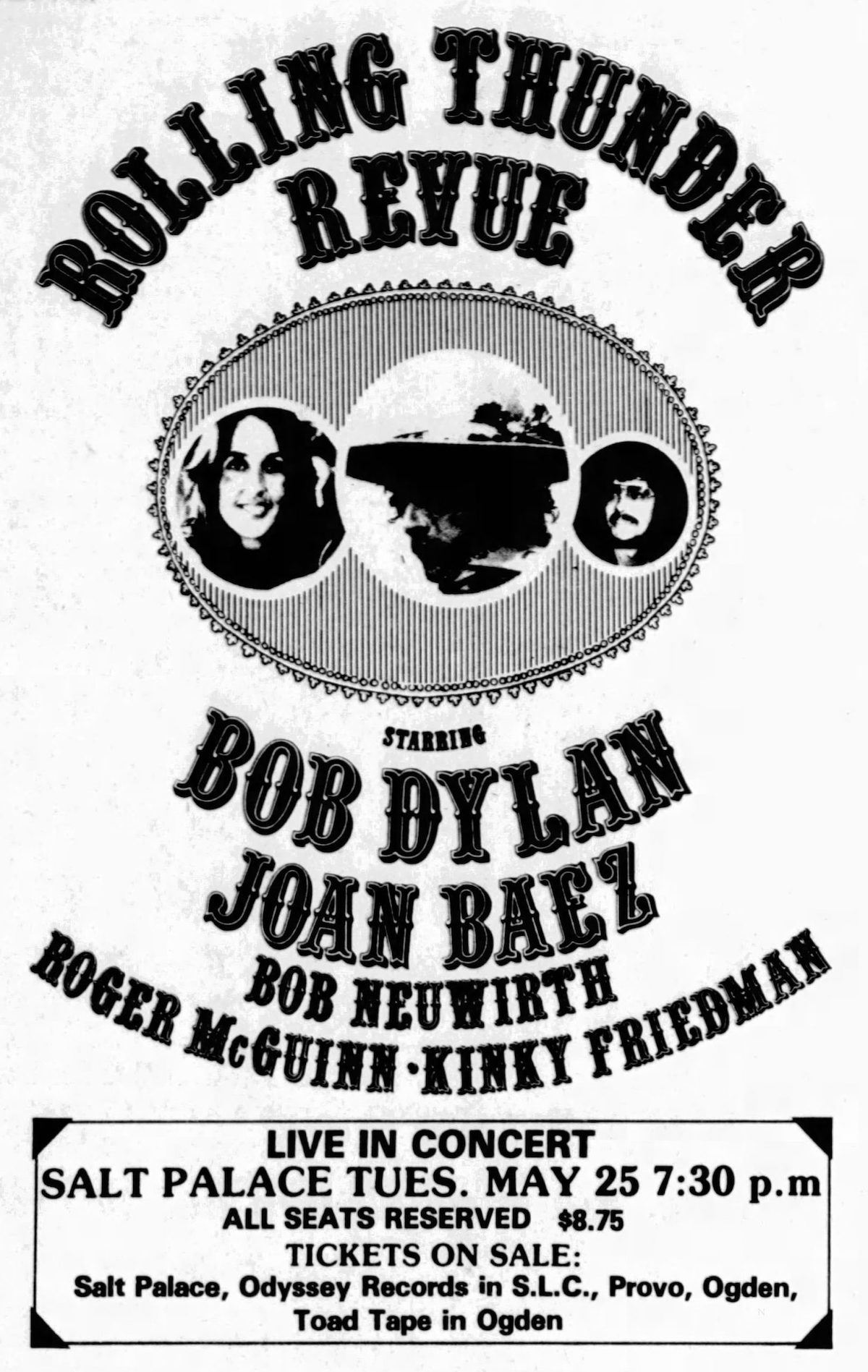 The Salt Lake City concert poster. From the ‘Do You Have It?’

The Rolling Thunder Revue started on October 30, 1975 from Plymouth, Massachusetts. The concerts were announced at the last moment and the atmosphere of the evenings was decidedly informal. Nonetheless, the shows were professionally recorded and many were also filmed, see for example Dylan’s 1978 film. Renaldo and Clara and the documentary half true and half no by Martin Scorsese Rolling Thunder Revue: A Bob Dylan Story of 2019.

A second series of gigs in larger theaters began on April 18, 1976 in Lakeland, Florida. Most of these shows were recorded by Dylan’s team and the audience; the May 23 concert in Fort Collins, Colorado ended up on the live album and TV special Hard Rain of 1976.

The equipment used for the recording never arrived in Salt Lake City two days later, which means that, if any recordings exist, they were made by fans. “Every single concert on the 1974 tour was recorded by someone in the audience,” says Dylyricus. “There are only two concerts from 1975, six from 1976 and just two of the 118 dates from 1978”.

“The odds are on our side and we are therefore optimistic that someone may have recorded it. Perhaps this is a person who has no ties to the fan community and who is difficult to track down. I have also heard that journalists sometimes recorded concerts to help themselves in writing reviews, but so far we have not been able to track down any of them to verify this theory ».

The website Do You Have It? contains all known information about the show, including five Salt Lake City newspaper reviews and the memoirs of guitar engineer Joel Bernstein. The latter has a vivid memory of Dylan and Baez dueling on Lily, Rosemary and The Jack of Hearts (the site contains a text sheet showing how the verses are divided).

Two newspapers are reporting that Dylan played Gates of Eden and so he probably did, but only one source mentions Black Diamond Bay. “On Black Diamond Bay there’s a question mark, ”Dylyricus says. “If he had done it it would have been great and it is included in a list of the highlights of the concert compiled by a fanzine of the time, along with songs like Oh Sister And Knockin ‘On Heaven’s Door which was easier to hear at the time. Fans are divided on this thing, some think it’s actually about Romance in Durangoanother song by Desire“.

If the Salt Lake City registration didn’t exist, the campaign wouldn’t be a waste of time. “I know two things for sure,” says Dylyricus. “Looking for it is fun and even if we don’t find it, we will end up discovering a lot of other things.”

Translated from Rolling Stone US.