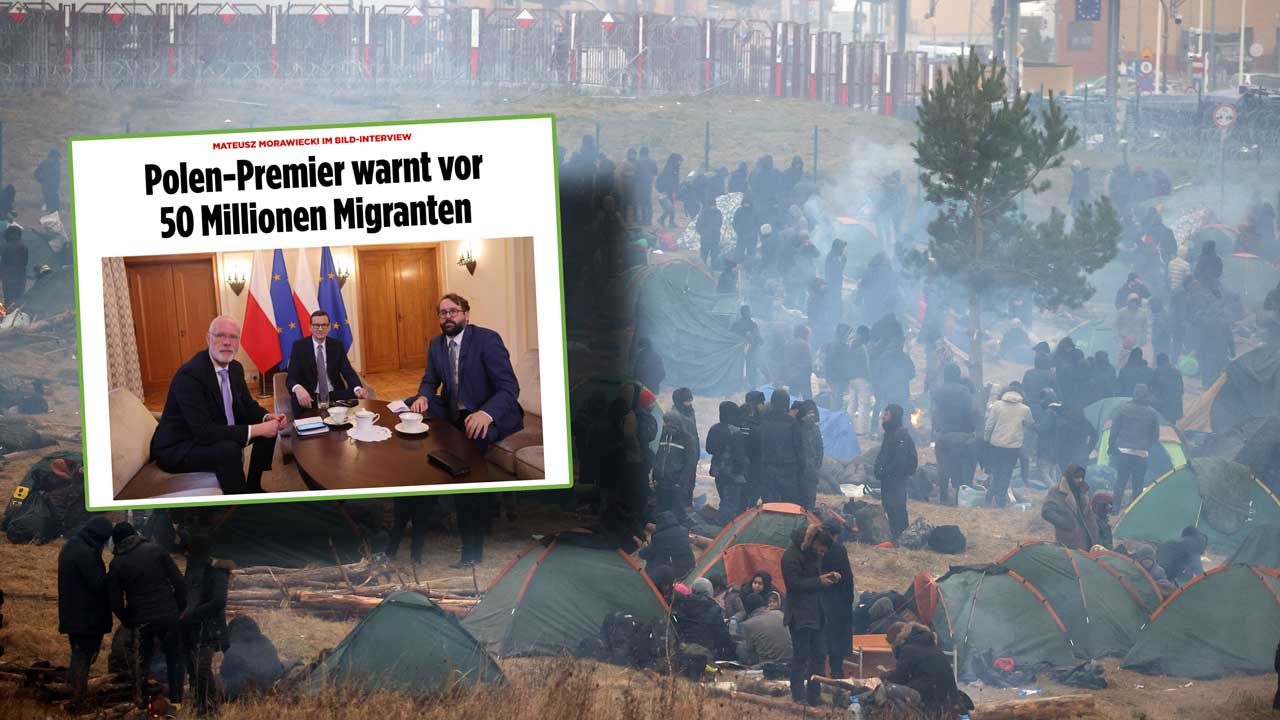 In an interview with the German daily “Bild”, published on Thursday, Prime Minister Mateusz Morawiecki emphasizes that Polish officials defend not only their border in the east, but also the borders of the European Union and NATO. The head of the Polish government emphasized that the entire Europe is the target of hybrid attacks by the Belarusian regime. “The Polish prime minister warns against 50 million immigrants,” headlines the newspaper.

Why block migrants on their way to Germany? Wasik answered briefly

Migrants at the border declare that they do not want to stay in Poland because their destination is Germany. Why not let them continue their journey? – We are…

Below is a translation of the entire interview with Prime Minister Morawiecki:

Prime Minister, we see riots, water cannons and wounded border guards on the border with Belarus. Is the situation getting out of hand?

The situation is now stable, but it is becoming more and more dangerous. Belarus uses migrants as weapons. Their destinations are Germany, France and the Netherlands. So, by defending our borders, we defend all of Europe.

Belarusians and Poles face each other on both sides of the border fence. How big is the risk of war?

Hope everyone stays calm. The provocations of Belarusian forces are intensifying. Hope they don’t go a step too far. We, Poles, are determined to defend our border by all means – and this is also the eastern border of Europe and NATO.

What are you afraid of?

Prime Minister Morawiecki had a telephone conversation with Chancellor Merkel

One thing is certain: if we do not manage to detain thousands of immigrants at the moment, hundreds of thousands, even millions, will soon come to Europe. From Africa, the Middle East and other countries. If we do not resolutely protect and defend our borders in Europe, hundreds of millions of people from Africa and the Middle East will try to come to Europe – especially Germany. Over 80 million people live in Germany. Would another 50 million be allowed to arrive? I think the people of Germany would not be satisfied with that because they want to maintain their standard of living. They want to preserve their culture.

Do you expect support from NATO – and therefore also from Germany?

If necessary, there are various stages of escalation. Above all, I am glad that the leaders of other NATO countries have expressed their support. Among them is Chancellor Angela Merkel and her future successor, Olaf Scholz. The next step would be a decisive statement by Belarus’ neighbors: Poland, Lithuania and Latvia. The next step may be to launch article 4 of the NATO treaty, which officially recognizes the violation of the territories of allied states.

… Which would prepare the ground for potential intervention by NATO allies. Do you see the risk of the coming war?

We can’t rule out anything. Lukashenka and Putin are clearly pursuing a strategy of disturbing and destabilizing the West. We don’t know what else they are planning. It is also possible that the border crisis is intended to divert attention from new military attacks in Ukraine that Putin is preparing.

I still hope that the international pressure will be successful and that the number of migrants, of which there are currently around 20,000 in Belarus, will not increase. By halting their influx, the EU could also help to bring these people back to their home countries.

A common claim in Germany in 2015 was that border protection is not possible. Are you proving now exactly the opposite?

Of course. We guard our closed border. And hardly anyone gets through, even though thousands try every night and day. This shows that you can successfully protect your borders. As a sovereign state, you must also guarantee this. The same is true for Europe: we must do everything we can to defend our borders against migrants in the Mediterranean and to the east.

Do you mean we have to enclose a wall around Europe?

We need every form of protection and supervision to defend ourselves against attacks. Be it a wall, a fence or electronic devices that immediately report any intrusion.

See also: Ministry of National Defense: The soldiers of the Belarusian Spetsnaz led the attack on migrants [WIDEO]

Why are you not using the help of the EU border agency Frontex? Its headquarters are in your capital city.

Currently, there are over 15,000 people on our eastern border. soldiers plus border guards and the police. Frontex has only about 1 ts. officers for such missions – for all of Europe. Why should we ask them if we are doing our own thing?

Has Angela Merkel failed when it comes to refugee policy?

Szydło: Merkel is breaking all EU rules by talking alone with Minsk and Moscow

Oh definitely. I believe that the policy of 5-6 years ago was not appropriate because it was a policy that threatened the sovereignty of many European countries and created artificial multiculturalism. In my opinion, it was a dangerous policy for Europe and the world. We must be fully consistent, fully consistent.

Some are still critical of the treatment of refugees at the border, arguing that it is against European law. They say you ignore asylum applications, that you push cold and injured people back abroad.

On the contrary: people who find themselves in the forest on this side of the border end up either in hospital or in a camp where they can apply for asylum. In this way, we saved many people from freezing to death.

But the new Polish regulations also allow people to be pushed across the border – and this violates EU law.

Border protection must be effective. Therefore, we must be able to push back those who violate our borders.

An exclusion zone has been created along the perimeter fence. Why are journalists, human rights organizations and even parliamentarians not allowed to verify that the rule of law is respected at the border?

Clash between Polish and German ambassadors for Belarus. A spokesman for the Ministry of Foreign Affairs comments

Chancellor Angela Merkel used the phrase “Mr. Lukashenka” during her conversation with Lukashenka, but let us remember that the matters that are taking place at …

Because many helpers and politicians took advantage of the situation for their own propaganda. Some even destroyed the border structures. We cannot tolerate it. Incidentally, an information center for journalists will soon be set up at the border so that reporters can obtain information about the situation there.

Chancellor Merkel recently spoke to Lukashenka on the phone. Was it against your will?

It is clear to me that in the current crisis situation, no decisions should be made outside of our backs. If the conversation was about how to bring migrants from Belarus back to their countries, then any initiative of this type is in the interest of Poland.

What will you probably tell the new Chancellor of Germany, Olaf Scholz, when you talk to him?

I will tell him: here in Poland we defend the EU border. And if we are talking about the bigger picture: let’s work together for peace, instead of giving the extra money from the energy bill to Vladimir Putin so that he can increase his stockpile of weapons even more.

So you would say to Scholz: let’s stop Nord Stream 2?

Yes of course! Nord Stream 2 must be suspended!

See also: “Maybe that’s it.” The second bottom of the talks with Lukashenka and Putin

Videogames entered his life in the late '80s, at the time of the first meeting with Super Mario Bros, and even today they make it a permanent part, after almost 30 years. Pros and defects: he manages to finish Super Mario Bros in less than 5 minutes but he has never finished Final Fight with a credit ... he's still trying.
Previous Former footballer of Wisła Kraków admitted selling the match against Legia. It was the famous “miracle Sunday” [WIDEO]
Next Skoda Slavia – cheap and nice sedan. The competitor of Fiat Tipo will be Indians