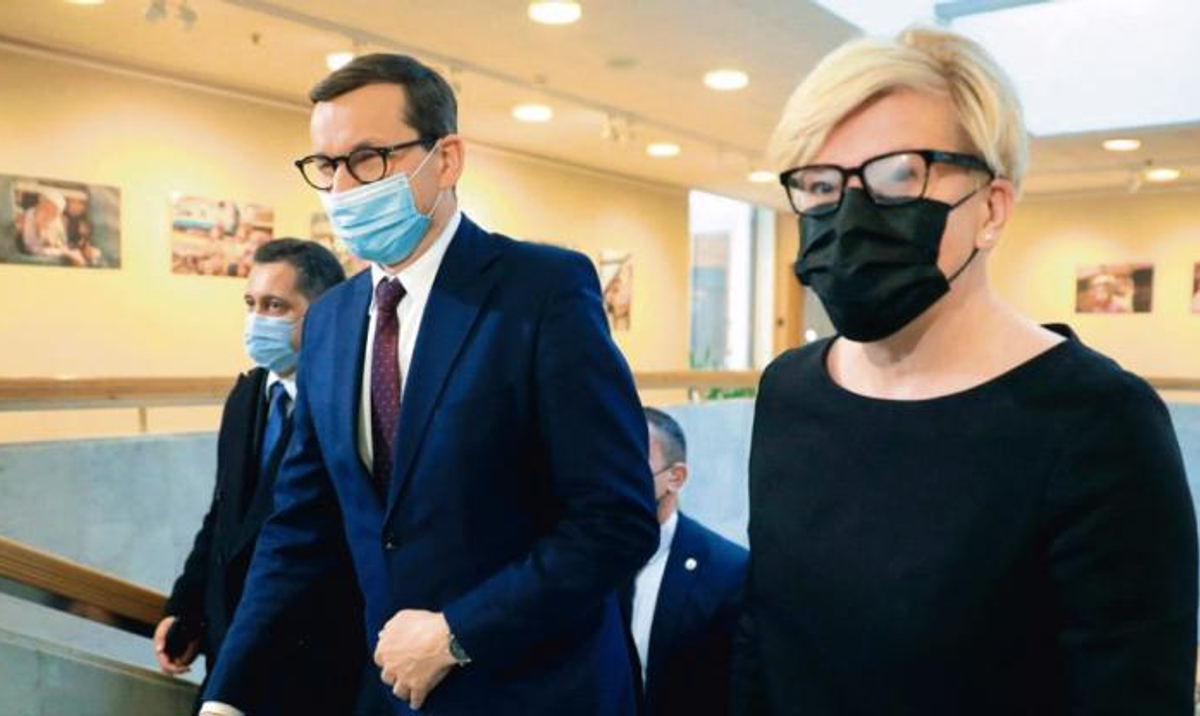 Invasion of Ukraine? Preparations in the event of war

Mateusz Morawiecki left Warsaw before dawn on Sunday to visit the capitals of all three Baltic states on the same day. This week the diplomatic campaign will be continued: the prime minister will fly to other EU countries.

Hurry is advisable because, as the New York Times revealed, the Americans warned European allies that “a short window of opportunity remained” to build a united US, EU and UK front that would dissuade Moscow from attacking Ukraine. At the end of last week, the director of the US National Intelligence Avril Haines visited Warsaw.

Poland apparently took part of this task. Morawiecki used extremely drastic words this weekend to mobilize his allies to action. In an appeal recorded in English on YouTube, the head of the government said that the crisis on the border with Belarus is the greatest challenge to the security of our country since the fall of communism 30 years ago. He referred to Russia’s attack on Georgia in 2008 and Ukraine in 2014. He announced that “as for hundreds of years” Poland would defend the borders of Europe. Apparently, he meant not only Lukashenka but also Putin, he spoke about the threat from ” dictators “. And he warned that Moscow might want to “test” the credibility of NATO’s guarantees on the eastern fringes of the alliance.

In Tallinn, the head of the government threatened, in turn, that the closure of the border crossing in Kuźnica may only be a prelude to the complete freezing of traffic with Belarus by Poland. He warned that you should be prepared for a conflict that could last for years.

In Vilnius, the prime minister warned that although it was possible to persuade, inter alia, In order to block the departure of immigrants to the West via Belarus in Iraq, Lukashenka’s services are trying to open new migration routes, including those from Afghanistan and Uzbekistan. Because, according to Morawiecki, what is happening on the border with Belarus is only part of a much wider campaign undertaken by the Kremlin. Part of it is also a drastic reduction in gas exports to Western Europe and an artificial inflation of prices, pressure on the pro-Western government in Moldova, but above all, undertaking extensive preparations for a war with Ukraine.

In the Baltic states, Morawiecki obtained full support. – Poland is our strategic partner, our cooperation is exemplary, our support for Poland is full – she assured, inter alia Lithuanian Prime Minister Ingrida Šimonyte.

However, it will be much more difficult to convince the main countries of Western Europe to take a tough stance towards Russia. Especially that in view of the coming winter and already very high energy prices, fears of an open gas war with Russia are very serious in Europe.

Nevertheless, Emmanuel Macron warned last Monday in a telephone conversation with Vladimir Putin that the invasion of Ukraine would meet NATO’s response. This is a radical shift in the position of the French president who, a year ago, sought to “reset” relations with Moscow, and earlier said that the alliance was in a state of “brain death”.

America seems particularly determined. Late last week, Democrat Bob Menendez, chairman of the influential Senate foreign affairs committee, introduced drastic sanctions against Russia in the event of aggression against Ukraine. They assume not only the blocking of the Nord Stream 2 gas pipeline, but also the practically cutting off of Russian banks and the Russian financial system from the world. Restrictions are added to the annual military budget and are therefore automatically implemented. They will be voted in the Senate immediately after Thanksgiving (November 25). Nevertheless, it will be up to Joe Biden to decide whether the Kremlin has already started its “aggression” on Ukraine and the US sanctions are coming into force. A few days ago, on the orders of the American president, CIA chief William Burns flew to Moscow. take up the war in Ukraine.

For America, the best solution is to place a president who is sympathetic to Russia in Kiev

In turn, Robin Dunnigan, responsible for relations with Eastern Europe at the State Department, who was in Warsaw on Wednesday and Thursday, told Rzeczpospolita: “We are very concerned about the reports about the accumulation of Russian troops on the border with Ukraine. a good time that US guarantees to Ukrainian sovereignty and territorial integrity are inviolable. ”

US diplomatic sources claiming anonymity believe the invasion could take place in the coming weeks. In their opinion, however, Putin has not yet made a decision whether to launch the attack or seek to destabilize Ukraine by other means, so that Volodymyr Zelensky would be replaced by a more pro-Russian president. In the eyes of the Kremlin, the current leader, though Russian-speaking, complied with America’s strategy.

– For America, the best solution is to place a president who is sympathetic to Russia in Kiev. When this happened in Georgia, the tension eased, the famous American strategist Edward Luttwak tells Rzeczpospolita.

However, the Kremlin might have come to the conclusion that now was the best time to launch an attack, without which the plans to recreate the Russian empire would collapse. The change of government in Germany and the upcoming elections in France put the two main EU countries on the defensive. In the US, support for Biden is collapsing as Republicans are gearing up to regain power and blocking nominations for hundreds of key US administration positions. Thanks to high oil and gas prices, Moscow has the means to finance large-scale military operations.

In spring, Putin had already concentrated serious troops on the border with Ukraine. In Washington, however, you can hear that the scale of preparations is now much greater, both in terms of the number of troops and the quality of weapons.

The Americans, however, do not know how large the scale of the operation Putin is considering. Or at least they don’t want to talk about it yet. The head of Ukrainian intelligence, Kyryło Budanov, is more precise. In his opinion, there is a land, sea and air offensive at stake, which would result in the Kremlin gaining a land connection between Donbas and Crimea. However, an even farther offensive may also come into play, since a landing in Odessa is planned. Then the Russians could take control of the entire south of Ukraine, all the way to their occupied Transnistria. According to Budanov, part of the operation would be a smaller-scale offensive by Russian troops from Belarus to the northern part of Ukraine. The Ukrainian general believes that the strike could come in late January or early February. “Our assessment is consistent with that of the Americans,” admitted Budanow.

Videogames entered his life in the late '80s, at the time of the first meeting with Super Mario Bros, and even today they make it a permanent part, after almost 30 years. Pros and defects: he manages to finish Super Mario Bros in less than 5 minutes but he has never finished Final Fight with a credit ... he's still trying.
Previous Sandecja tied with Widzew in the game of Fortuna in the first league
Next The prime minister says the zloty is strengthening. “We will do everything to make the zloty a bit stronger”