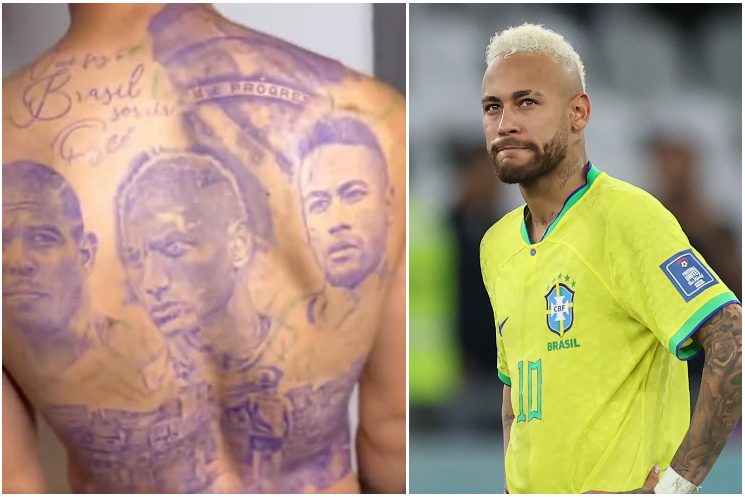 is willing to pay to be removed

After returning from the World Cup in Qatar, the huge tattoo that Richarlison had on his back caused much discussion. With Neymar who first blocked his partner on social media and then offered him money to be removed.

The Brazil had to say goodbye prematurely the World Cup in Qatar where he was among the main favourites, alongside France. Deschamps’ national team lived up to expectations, while Tite’s had to abdicate in front of Croatia in the quarter-finals. A burning elimination, experienced as a real failure but which for some did not erase the thrill of the dream of having participated in the greatest football event. Like Richarlison author of absolute level personal performances crowned by 3 goals overall.

The green-and-gold striker stood out on his debut against Serbia, signing an author’s brace, then repeated himself in the 4-1 win over South Korea by scoring another goal. But during the more than 80 minutes in which he remained on the pitch against Croatia he jammed up failing to contribute to the Seleçao’s world championship path, sensationally stopped on penalties by Modric and his companions. A disappointment which, however, seems to have been overcome quickly given that a few days after returning to Brazil, Richarlison’s name made a comeback.

Indeed, it made the news the injury suffered against Croatia, for which he will be sidelined up to six weeks with a hamstring problem after injuring himself in the warm-up before the quarter-finals. Richarlison was keen to make it though, and took to the field to play for 84 minutes before being replaced by Pedro. An act of courage and dedication to the cause for which he was applauded at home.

A little less for his huge tattoo that he decided to have engraved on his back in memory of the World Cup in Qatar. an ideal”Mount Rushmore” in which three faces stand out: that of Ronaldo, Richarlison and Neymar, that is, forcefully inserting himself between two absolute myths of Brazilian football. All crowned by the national flag in the background and a phrase that recalls another absolute star, Pele: “You made Brazil smile”the message that O’Rei had written to him on the occasion of one of his world goals.

A tattoo of dubious quality, certainly of undoubted significance of a very strong symbology that immediately caused discussions in Brazil for a Richarlison who compared himself without any hesitation to the legend of Ronaldo and his teammate Neymar, another undisputed green and gold champion. But the same tattoo doesn’t seem to have achieved great success for everyone, especially for those who have found themselves, against their will, portrayed on Richarlison’s shoulders. Thus the news broke that Neymar would have even offered his compatriot 30,000 euros in order to be removed.

The Paris Saint-Germain star has reportedly also jokingly blocked Richarlison on social media after the pair forged a very strong friendship while in Qatar. Obviously a fun provocation which, however, immediately went viral, reopening the discussion especially in Italy, on the risky choice by Richarlison, whose tattoo has been the subject of memes and ironies via social media.

David Martin is the lead editor for Spark Chronicles. David has been working as a freelance journalist.
Previous Grey’s Anatomy: Ellen Pompeo reassures fans that she will return “definitely” – VIDEO UPDATE
Next Jennifer Aniston’s plea for Christmas: «Adopt responsibly»