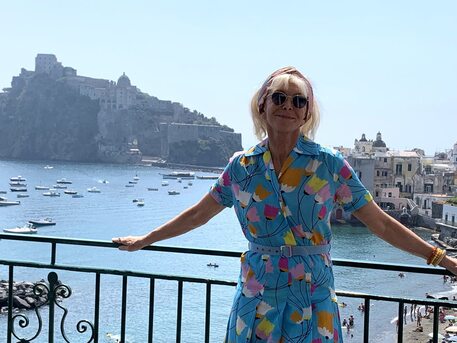 (ANSA) – NAPLES, 03 JUL – Ischia Global 2022 increasingly in pink with a large section dedicated to women protagonists of the cinema and entertainment industry accompanied by a shower of awards: it will be chaired by the English producer and director Trudie Styler, the Permanent forum ‘The word to women’, the highlight on Wednesday 13 July at Regina Isabella as part of the twentieth edition of the Film & Music Festival. The list of personalities from many countries has already been fed; Netflix communications strategist Lisa Taback (USA), producers Dorothy Canton (USA), Chiara Tilesi and Federica Artiano, directors Sophie Lane Curtis, Sonia Nassery Cole (Afghan activist) and Roberta Lena, agent Michelle Liebtreu (UK) , the Turkish journalist Asligul Atasagun. With them the actresses of the year Haley Bennett and Susy del Giudice, Lina Sastri, Clara and Esther McGregor, Marianna and Angela Fontana, Maria Nazionale, Sofia Milos, Aurora Giovinazzo (Breakout Actress of the Year) Lola Ponce (Friends of Ischia), Francesca Tizzano, Ema Kovac, Caterina Milicchio, Daria D’Aloja, Martina Difonte, Martina Marotta, the model Avigal Medhanie Mihreteab, the casting-directors Barbara Giordani, (Ischia People Awards) and Teresa Razzauti, the singers Valentina Stella, Nicole Slack Jones and Valeria Altobelli and make-up artist Daniela Argiolas. Conclusions by Silvia Key, Italian Consul General in Los Angeles. She and Chiara Tilesi will receive the Ischia Humanitarian Award for ‘One of Us’, the series on ‘(extra) ordinary Italian women’ who have distinguished themselves in the USA in various sectors. ‘Humanitarian’ also to the authors Giulia Minoli and Emanuela Giordano (together with the actors Domenico Macri ‘and Daria D’Aloja) for the documentary’ If we were to tell the truth ‘on organized crime. The Social Cinema Forum (11 July) with Rosalba Giugni president of Marevivo is the classic appointment to testify the commitment of the entertainment world to respect for civil rights. Ischia Global, produced and founded by Pascal Vicedomini, chaired for the 2022 edition by Irish director Jim Sheridan and honorary president Tony Renis, is realized with the support of the DG Cinema and Audiovisual of the MiC and the Campania Region, the participation of Riflessi, Givova, Vulcano Buono, Rs Productions, Tatatu, Banca Ifis and Isaia. The event is promoted by the International Academy of Art Ischia with the patronage of Parliamentary Assembly of the Mediterranean, Red Cross, Siae, Nuovo Imaie and the Municipalities of Ischia, Lacco Ameno and Forio (ANSA).

David Martin is the lead editor for Spark Chronicles. David has been working as a freelance journalist.
Previous Flaiano at the Marina di Pescara: first film in memory of Maradona, hosted by Giordano
Next All Mission Impossible movies from worst to best