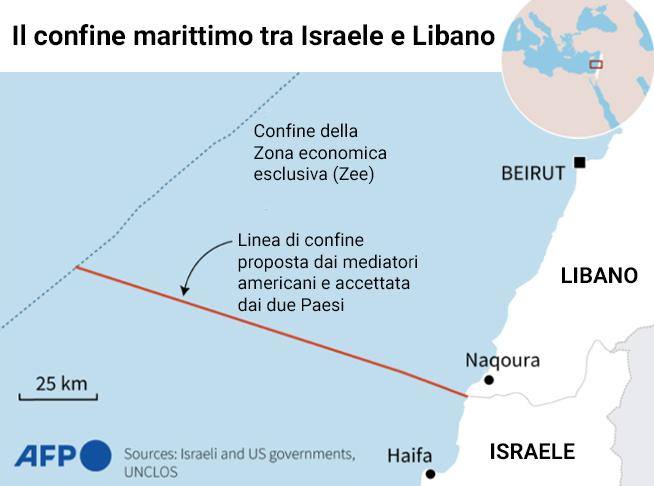 Israel-Lebanon agreement signed for the division of maritime borders – Corriere.it

The President of the Lebanese Republic Michel Aoun on Thursday 27 October signed in Beirut part of the documents necessary to formalize the agreement with Israel, a country formally enemy of Lebanon, for the definition of the maritime border between the two countries and the consequent division of energy resources in the Eastern Mediterranean. The announcement of the signature was in a joint press conference between the vice-president of the Lebanese parliament, Elias Abou Saab, and the American special envoy Amos Hochstein. The agreement closes a negotiation that began in 2020 and has continued, between steps forward and backward, until today. The Leviathan field is also located in that area, which could play a strategic role for Italy if the Poseidon gas pipeline was built, with landing expected at Otranto. A project that has recently come back, but never completed.

No normalization of relationships

The vice president of the Lebanese parliament Elias Abou Saab specified that the second part of the documents that will be exchanged, thanks to the United States, with Israel, will be signed by Lebanese delegates in the ceremony scheduled in the afternoon at the UN base in Cape Naqura along the Blue Line of demarcation between the two countries. US envoy Hochstein will attend the document exchange ceremony. The two Israeli and Lebanese delegations will sit in two separate rooms of the UN base and will not meet, to avoid this agreement being perceived as a political and diplomatic normalization between the two countries.

What does it foresee

The agreement provides for Lebanon to receive most of the Qana field, to Israel for a share of future profits and total control over the Karish field. However, it is not yet clear how Qana’s future profits will be distributed. The French multinational Total, which manages the field (40%) with Eni (40%) and the Lebanese government, will also be involved in the negotiations. Another issue that could make the implementation of the agreement more complex concerns the activity of the two fields. While Tel Aviv will be able to enjoy income from the Karish field immediately, the activation of the Qana field will take some time.

Videogames entered his life in the late '80s, at the time of the first meeting with Super Mario Bros, and even today they make it a permanent part, after almost 30 years. Pros and defects: he manages to finish Super Mario Bros in less than 5 minutes but he has never finished Final Fight with a credit ... he's still trying.
Previous Renewal Skriniar, Inter meets the defender’s agents
Next Megan Fox and Machine Gun Kelly: “We drink each other’s blood”