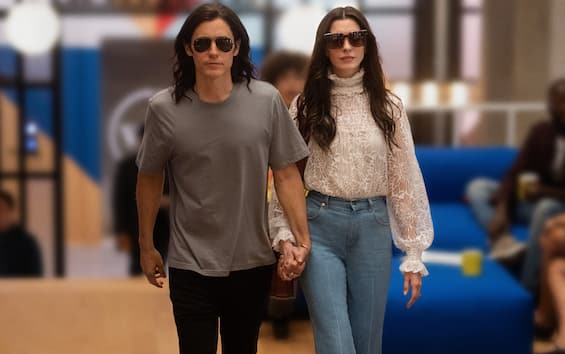 The new upcoming serial will tell the true story of the rise and fall of the start-up WeWork, a supplier of co-working spaces that ended up having a value of 47 billion dollars which then, within less than a year, was collapsed. The show will debut on March 18 (also visible on Sky Q and via the app on the Now Smart Stick). Here is the Italian trailer

The official Italian trailer of We Crashedthe television series that will debut on March 18 on AppleTV + (also visible on Sky Q and via the app on the Now Smart Stick).

A highly anticipated show, also and above all for the lead couple: for the first time together on the small screen, we will see Jared Leto and Anne Hathaway play the protagonists of a dramatic financial story but also of an equally dramatic love story.

In short, the drama is always there, in any of its sauces and declinations. This is precisely the beauty of the series, in addition to the fact that it tells a true story: in fact, what is being retraced and analyzed is the sudden rise and fall of the start-up WeWork, a company that supplies co-working spaces which found itself having a value of 47 billion dollars which then, within less than a year, collapsed.

We Crashed will be a miniseries, with the first three episodes debuting on March 18, followed by a weekly release of a new episode every Friday until April 22.

You can watch the official Italian trailer of the television series We Crashed in the video that you find above, at the head of this article.

WeCrashed, Jared Leto and Anne Hathaway in the trailer of the tv series

We Crashed is created by Lee Eisenberg and Drew Crevello and is based on the Wondery podcast titled WeCrashed: The Rise and Fall of WeWork.

The television series will trace the rise and fall of WeWork. This is the company that provided shared workspaces and managed to become one of the most listed companies in the world.
Jared Leto will play Adam Neumann, the CEO of WeWork, with an incredible charisma.

The series will analyze one of the most disastrous financial cases in the history of recent years, retracing all the stages of the entrepreneurial adventure.
WeWork was initially conceived to be something revolutionary, a one-of-a-kind co-working space that completely changed the world of work. In less than ten years of activity, that brand has managed to become a global brand with an estimated value of 47 billion dollars. Then, suddenly and in less than twelve months, that immense value collapsed.

The interesting thing about the series We Crashed it is the analysis that underlies that collapse, the retracing of that entrepreneurial failure to understand its reasons.

The passionate side will clearly not be missing, in the sense that the story will also tell the love story between the managing director Adam Neumann (Leto) and his wife Rebekah, played by Anne Hathaway. She too was linked not only romantically to Neumann but also on a professional level, since she covered the role of executive of WeWork.

In addition to the lead couple formed by Jared Leto and Anne Hathaway, the cast is enriched by many exceptional names, such as Kyle Marvin (The Climb) as co-founder Miguel McKelvey. Marvin is also set to direct Paramount’s upcoming road trip comedy 80 for Bradya film that has just been announced and will star the legendary former football player Tom Brady, in the role of himself and also in the role of producer of the feature film.

In We Crashed there is also OT Fagbenle (The Handmaid’s Tale) who plays the part of investor Cameron Lautner and America Ferrera (Ugly Betty, Superstore), as entrepreneur Elishia Kennedy.

Lee Eisenberg and Drew Crevello are the creators and also co-writers, executive producers and co-showrunners.

Jared Leto yesterday and today: this is how he’s changed over the years

Jared Leto, born December 26, 1971, is one of the most popular and beloved artists of the golden world of Hollywood. He browses the gallery and discover the most beautiful photos of yesterday and today of the singer and actor.

In 2014 Jared Leto won the Academy Award and the Golden Globe for “Best Supporting Actor” for “Dallas Buyers Club”.

David Martin is the lead editor for Spark Chronicles. David has been working as a freelance journalist.
Previous Eradicator Free PC Game Download Full Version
Next The history of the Antica Pizzeria da Michele