Jennifer Lopez from the beginning of her career in show business aroused great media attention. Particular attention was paid to her private life. The star married three times, she also had several very media relationships. Her name was often featured on the covers of American tabloids.

The last few months also belonged to Jennifer Lopez. In early March, the media speculated that the star would part ways with baseball player Alex Rodriguez. Information quickly appeared that the couple had managed to stave off the crisis in the relationship. In April, Jennifer Lopez and Alex Rodriguez made an official statement that they had split up. In May, the US media first reported that Jennifer had been seen with Ben Affleck at Vax Live, then that the couple had spent several days at the Big Sky Resort in Montana. When a journalist “Today” asked Affleck’s friend Matt Damon if Jennifer and Ben were together, he heard: “It’s a fascinating story. I hope it’s true. I love them both. That would be amazing. “

Jennifer Lopez and Ben Affleck are back together? They were engaged once

Jennifer Lopez and Ben Affleck met in December 2001 on the set of the crime comedy “Gigli”. They were both stars. Her songs topped the Billboard charts, and he was successful in Hollywood. At first, Jennifer did not pay attention to her film partner. She had been married to the dancer Cris Judd for three months, it was her second marriage, and she believed it was the last.

Ben Affleck, who had broken up from Gwyneth Paltrow in October, was recovering from a broken heart and did not think about a new relationship. By the time… In April 2002, all the US gossip media speculated about Jennifer and Ben’s affair, who did not comment on these reports. Two months later, Lopez divorced Judd. For the media, this meant confirmation of speculation that another man had appeared in the star’s life.

Jennifer Lopez and Ben Affleck’s relationship was one of the most famous in Hollywood history. Paparazzi followed each step of lovers, the tabloids nicknamed them “Bennifer” and wrote about their previous relationships. It was then that the custom of calling show business couples with a word composed of the names of lovers, such as Brangelina (Brad Pitt and Angelina Jolie) began.

In November 2002, an engagement ring with a pink diamond appeared on Jennifer’s finger. Ben spent two and a half million dollars on an expensive gem. 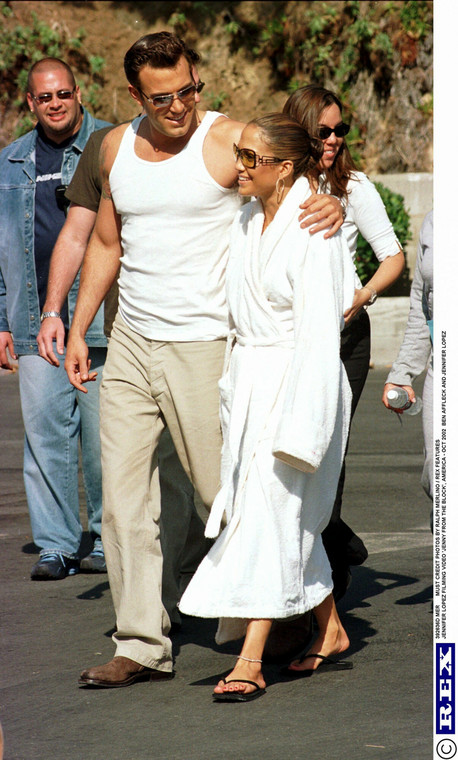 Ben and Jennifer, aka Bennifer

Jennifer Lopez and Ben Affleck – Why Did They Split Up?

The next year – in the media – belonged to Bennifer. In July 2003, the couple gave their first joint interview, which was supposed to promote the movie “Gigli”, but most of the questions were about romance. As tabloid “The National Enquirer” later reported, on the day of the interview on NBC Affleck, who was then in Vancouver, visited a strip club and cheated on his fiancée with two women. Although the actor denied these sensations, and his lawyers threatened the newspaper with a lawsuit, the public was waiting for … the engagement was broken.

The bride and groom set a wedding date. The ceremony was to take place on September 14. Four days before the scheduled date, an official information appeared that the date of the event was postponed due to … “too much media interest”. It wasn’t a good omen. Over the next weeks, the gossip media scrutinized Jennifer and Ben’s every gesture, looking for confirmation that the couple would soon announce their breakup. Oil was added to the fire by the statements of “Bennifer” friends that the bride and groom blamed each other: she was him for the antics with the strippers, he was for her – for creating their relationship in public, to gain media attention at all costs.

That moment came in January 2004. Ben Affleck did not speak for a long time about breaking up with Jennifer Lopez. He talked about their relationship in the podcast, emphasizing that the tabloids played a huge role in breaking the engagement. Jennifer Lopez, on the other hand, did not shy away from answering questions about her relationship with Affleck. In an interview for “Variety” she said: “My relationship with Ben ended in front of the world. This pain has been with me for two whole years.”