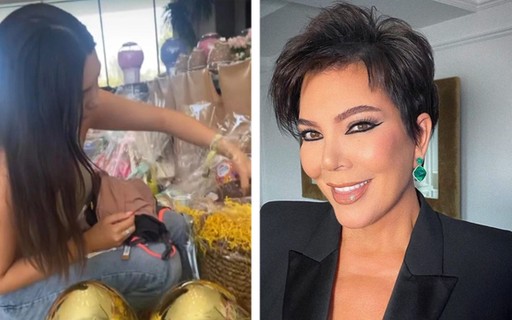 Nothing escapes the watchful eyes of the internet – even more so when it comes to fans of the Kardashian-Jenner clan. The new discussion among admirers of the famous family revolves around Kris Jenner’s Easter gifts: the 66-year-old businesswoman is being accused of having given Kourtney Kardashian’s stepdaughter, Atiana, a “simpler” treat than those offered to her other relatives.

Atiana attended Kris’ Easter celebration at the invitation of her stepfather, Travis Barker, who is Kourtney’s fiancé. The rocker also brought along his 18-year-old son Landon – who, in turn, called a friend, Carl Dawson.

The online stir around Kris came when Carl shared a video on his Instagram Stories of Atiana opening the gift he had received from the businesswoman: a basket that included golden Easter eggs and chocolate, according to the sites. mirror and The Sun. A netizen took a screenshot of the video and shared it on a Reddit forum centered on the Kardashians, accusing the family matriarch of having repurposed some pieces of clothing from Kim Kardashian’s brand, Skims, in the basket. The individual even claimed that Kris had given boots from a luxury brand to Carl Dawson, despite allegedly saving on Atiana’s surprise.

“Now why did Kris Jenner fill Atiana’s Easter basket with the same Skims top in eight different colors, but give Landon’s best friend a pair of Bottega Veneta boots?” asked the Reddit user in her post, which divided netizens.

“It’s just some free items they have and don’t want to use,” one person responded to the post, also accusing the Kardashian family of being “stingy.” “It’s probably something someone in the family didn’t want,” agreed another.

“I died with these baskets that are just the leftovers of promotional products [da Skims]”, said someone else.

Another person, however, came up with a new hypothesis: “I’m sure they all got the same things. But they have to show all the kids opening different things so they can ‘thank you’ and tag the brands that sent all these free gifts to Kris Jenner [nos posts nas redes sociais]”.

“Or maybe she [Atiana] really wanted some Skims pieces?”, added another netizen. “It’s so hard to imagine how it works for everyone, lol… She could have been happy with this gift. You do not know.”

While fans were divided over Atiana’s gift on Reddit, other Kris Jenner admirers were surprised by the details of the Easter party she threw for the family, which included personalized eggs and fancy candy dispensers for her grandchildren. See below:

Recently, the Kardashian-Jenner clan returned to share details about their personal lives in yet another reality show, ‘The Kardashians’. Check out the trailer below:

Videogames entered his life in the late '80s, at the time of the first meeting with Super Mario Bros, and even today they make it a permanent part, after almost 30 years. Pros and defects: he manages to finish Super Mario Bros in less than 5 minutes but he has never finished Final Fight with a credit ... he's still trying.
Previous Doctor Strange in the Multiverse of Madness
Next Olga Kurylenko in a limp horror