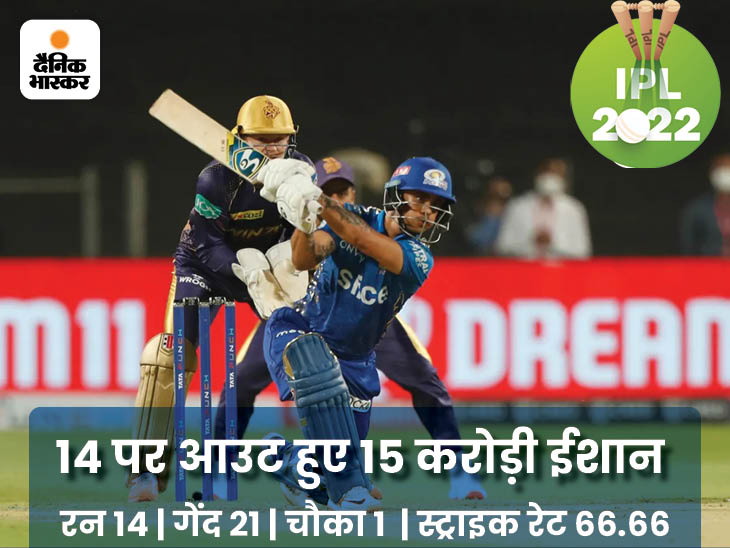 Mumbai Indians are facing Kolkata Knight Riders today in IPL 2022. KKR captain Shreyas Iyer has won the toss and decided to bowl first. Mumbai’s score is 140 runs for 4 wickets. Surya Kumar Yadav scored 52 runs in 36 balls while batting amazingly. At the same time, Tilak is playing 38 runs in just 27 balls with the bat.

15 crore Ishaan’s bat did not work
Ishan Kishan, sold for 15.25 crores in the IPL auction, could not do anything special against Kolkata. It looked like this player was playing a test match. Kishan scored 14 runs in 21 balls. He was dismissed by Pat Cummins playing his first match in IPL 2022.

Rohit was also a flop

Mumbai captain Rohit Sharma was dismissed by Umesh Yadav after scoring just 3 runs in 12 balls. Umesh has dismissed Rohit for the fifth time.

Devald Brevis (Baby AB), playing his first match, became the victim of Varun Chakraborty after scoring 29 runs in 18 balls. He hit 2 fours and 2 sixes in his innings of 29 runs. His strike rate was 152.63. This player’s bat may spark fire in the coming matches.

Five-time champions Mumbai are looking for their first win of the season. He has lost in two consecutive matches. At the same time, Kolkata team is second in the points table by winning 2 out of 3 matches. If the team led by Shreyas Iyer wins today, it will overtake Rajasthan Royals to become No.

Dewald Brevis has played for South Africa in the last Under-19 World Cup.

Jammu and Kashmir fast bowler Rasikh Salam will play the first match for Kolkata. He is the fourth cricketer from Jammu and Kashmir to play IPL. He was also banned for two years by the BCCI for his birth certificate. At the same time, 19-year-old young South African batsman Devald Brevis has got a chance to debut for Mumbai. Brevis is also known as Baby Abby.

Head to Head in Mumbai Truck to Kolkata Small Car
So far, 29 matches have been played between both the teams, in which 22 times Mumbai has shattered the hopes of Kolkata’s victory. Kolkata has won only 7 matches against Mumbai. Mumbai has touched the highest 210 and the lowest 108 runs in an innings against Kolkata. On the other hand, Kolkata has scored a maximum of 232 against Mumbai and a minimum of 67 runs in an innings.

Videogames entered his life in the late '80s, at the time of the first meeting with Super Mario Bros, and even today they make it a permanent part, after almost 30 years. Pros and defects: he manages to finish Super Mario Bros in less than 5 minutes but he has never finished Final Fight with a credit ... he's still trying.
Previous Christine Ko stars in the fifth season of The Handmaid’s Tale.
Next Instagram, women are constantly subjected to misogynistic insults that go unpunished