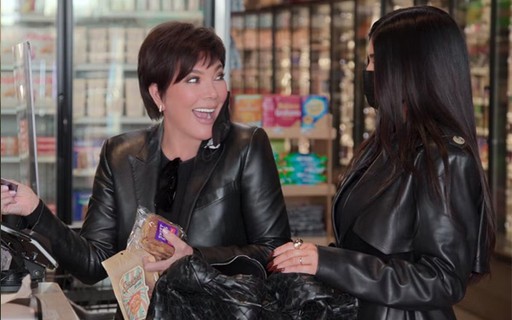 Kylie Jenner and Kris Jenner generated controversy for a scene in the most recent episode of the reality show of their family: viewers were outraged by the way the duo acted during a trip to the supermarket.

On the show, the matriarch of the Kardashian family, 66, and her youngest daughter, 24, decide to go shopping after Kylie says she wanted to “do normal things” with her mother. With the intention of living a day of ordinary people, the millionaire businesswomen not only went to the market but also filled up their car at a gas station and went through a car wash.

“This is like Disneyland. We have to bring the kids here,” Kris Jenner once said as her vehicle was being cleaned.

At the market, Caitlyn Jenner’s ex-wife reminded her daughter about how to act at the establishment: “You have to put the basket back, remember? Don’t be the customer who just leaves the basket in the middle of the parking lot”. from the episode, she and Kylie were still excited to be able to push a cart with their groceries.

Despite the scenes being presented in a humorous way, they generated criticism on social media. At a time when the world is dealing with several crises – including the very increase in prices of products in supermarkets, which was driven by the Covid-19 pandemic -, netizens considered that Kris and Kylie live out of reality.

“Watching Kylie and Kris Jenner having fun doing things like shopping at the supermarket and filling up their own car makes me so scared lol. Almost as bad as Kendall cutting her cucumber last week #privilege”

“Kylie and Kris calling it an ‘experience’ going to the supermarket, paying for groceries and filling the cart is the richest and most privileged thing I’ve ever seen”

“Kris and Kylie calling the grocery store an ‘experience’ and calling the car wash a ‘tourist attraction’ is the most disgusting thing I’ve seen today.”

Some netizens, however, defended the behavior of the two celebrities. “I love the way Kris and Kylie don’t even try to pretend they’re normal and really have fun doing normal things and seem so genuine.” commented a fan on Twitter.

Another person revealed that amused with the duo’s tour of the market: “The episode of ‘The Kardashians’ where Kris and Kylie literally do the most normal things and have a lot of fun is pretty funny and cute for no reason.”

“It took me half an hour to watch the video of Kris and Kylie going to the market and the car wash, hahaha, what a beautiful mother Kris” approved one more person.

So far, Kylie Jenner and Kris Jenner have not commented on the controversy.

While the matriarch of the Kardashian-Jenner clan has a net worth valued at $170 million, her youngest daughter has a fortune of $700 million, according to a survey by the site. Celebrity Net Worth.

See moments from Kris and Kylie’s outing in the video below:

Videogames entered his life in the late '80s, at the time of the first meeting with Super Mario Bros, and even today they make it a permanent part, after almost 30 years. Pros and defects: he manages to finish Super Mario Bros in less than 5 minutes but he has never finished Final Fight with a credit ... he's still trying.
Previous True Detective, Jodie Foster will be the protagonist of the fourth season
Next Dua Lipa actress in Barbie with Margot Robbie