Lady Gaga is a changeable artist, willing to experiment, to try out different masks. Recently, she had the opportunity to start another. On January 20, during Joe Biden’s swearing-in ceremony, she sang the national anthem “The Star-Spangled Banner”.

The singer has already sung the American anthem on many occasions, but this time it was assumed that it would be an exceptional performance. Lady Gaga did not disappoint.

Gaga will sing the anthem during the Super Bowl final in 2016. The performance at Levi’s Stadium in Santa Clara, California, where the Carolina Panthers and Denver Broncos faced the NFL championship, were received very warmly by the Americans. The singer was accompanied by Marlee Matlin, a deaf actress who sang “Starry Banner” in sign language.

To understand how much Lady Gaga influenced pop music, we need to go back to 2008, when pop was slowly losing its relevance. It was no longer the music that made the world know legends like Michael Jackson or Madonna. The celebration of this trend has become unbearable. I would like to remind you that Paris Hilton, Lindsay Lohan and Kim Kardashian released their albums around that time, fortunately their music career collapsed quickly. That’s why, when Lady Gaga appeared on the horizon, there was a shadow of a chance that she might stay at the top a little longer.

The singer crept onto the stage with a perfectly thought out plan. Pop was supposed to shine with his bright light again. The professionally produced hits, artistic album covers and a story that created an extraordinary story were to help in this. Lady Gaga promoted it with elaborate performances almost every time the album was released, she collaborated with the best fashion designers to make the costumes amaze every time, and even flirted with connoisseurs of high art. When releasing the album “ARTPOP”, she teamed up with Jeff Koons, who created a huge sculpture especially for the premiere, which was presented during the artist’s performance in Brooklyn.

“I think I was inspired by Andy Warhol himself” – these words were repeated by Gaga almost like a mantra in every conversation with the media. And while even the most malicious antifans can be furious at such a confession, it’s hard to disagree with it. Gaga made fans of pop hits no longer have to be ashamed of their musical preferences, and could proudly sit among fans of alternative or rock. Gaga wasn’t embarrassing, pop wasn’t embarrassing any more.

Busy creating hits, she meticulously created an army of fans who would follow her into the fire. The singer re-emerged from the ranks and reminded all the stars that the fans create the artist who must remember them even in the middle of the night. Litlle Monsters, as the artist affectionately called them, have become a group that not only defends the idol in social media, follows her to most of the concerts – they are also people who have found a common language not only in terms of their musical preferences. The fandom revolution has almost been redefined and its effects are still visible today.

Mother Monster brought together people who, above all, struggled with the problem of self-acceptance. The singer showed them that it is not a shame to be different, different. You can mock hysterical fans, but you have to remember that the authority that allows us religious or sexual freedom is extremely important – especially for young people, especially nowadays.

Released in 2010, the song “Born This Way” changed the face of the LGBT + community by becoming its unofficial anthem. Although support for homosexuals is nothing new among female singers, Gaga is the only one since the golden days of Madonna who stopped treating them as a colorful mass, but approached each problem individually. Some media accused her of doing this to please the public. Even if she pretended, it did help – and that’s the most important thing.

Death on the big stage

Lady Gaga, with her performance in 2009 at the MTV VMA gala, proved that a pop stage performance is more than just a bunch of naked dancers and exploding fireworks. In less than five minutes, the artist combined pop sound with theatrical energy. Viewers not only listened to the perfectly performed hit “Paparazzi”, but also watched a magical story about perseverance and even determination in the pursuit of fame. Klimaks show is a bloodied Gaga who begs people for help and receives a standing ovation in response. Eventually, it dies suspended from a crystal chandelier. Pretty ironic, right?

What a performance in a wedding dress is for Madonna or a dance with a yellow boa is for Britney, this is what Gaga’s dramatic performance at MTV is. Each subsequent performance of the singer did not make such a great impression on the audience. The artist could only fight with herself, because at that time she was second to none. It was only a few years later that the younger friends remembered the importance of a show that would interest the audience.

A year later, Gaga reappeared at the MTV gala. This time to pick up a number of prizes that she managed to win. On the red carpet, she appeared in a dress designed by Fran Fernandez, which was entirely made of meat. To understand how important this moment was in pop culture, you can, for example, look at Wikipedia, where an extensive article is devoted to the creation. Some praised the artist for her courage, others criticized her. Everyone wanted to comment. 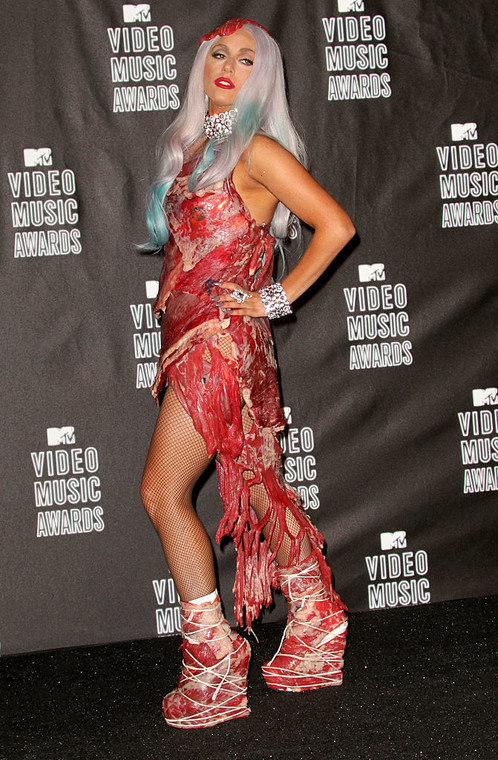 Gaga’s appearance in a controversial dress at a mainstream party was one of the loudest protests in the world. The singer explained in an interview with Ellen DeGeneres that it was a deliberate manifesto against the American policy of concealing the sexual orientation of soldiers. Thanks to this, the artist began a public debate on the ban, and a few months later, Barack Obama signed a law abolishing “Don’t Ask, Don’t Tell”.

Artpop can mean anything

With her successive successes, Gaga’s career gained momentum. In 2016, the artist decided to try her hand at acting, playing the role of a cold-blooded countess in the series “American Horror Story: Hotel”. She had a real challenge as she replaced the legendary Jessica Lange, who was the star of horror in previous seasons. The creation was warmly received not only by fans but also by critics.

The success of the series meant that two years later the singer could be seen on the big screen in the refreshed version of the movie “A Star is Born”. Based on a banal pattern, the story of a small-town girl who becomes a star with the help of her partner, became an international hit. The production received eight Oscar nominations, and Gaga received the statuette for the best song, thus joining the musical icons that can boast of a golden knight.

Queen of the Damned

Mother Monster created a world for outsiders, persecuted people who did not comply with the norms imposed by society. She showed these people that everyone can be who they want and should be appreciated for their difference.

In 2014, she invited Millie Brown, a performer, to the stage, who at one point vomited on her. The singer was immediately criticized by the media for promoting bulimia, but no one expected the explanations that the artist prepared for everyone. “I wanted to get rid of the tremendous suffering that had built up inside me. I wanted this girl to vomit on me in front of the world,” Gaga said, only to admit that she was a victim of rape. She showed her support for the women affected by this problem several more times, incl. in the song “Till It Happens To You” and a shocking performance at the 2016 Oscars.

During the prevailing coronavirus pandemic, together with the World Health Organization, she organized the largest charity concert in the world. Artists who toured from their homes raised funds to support healthcare professionals. The event was watched by over 21 million viewers in the United States alone. On the other hand, coverage in social media was followed by over 5 million fans. This is the power of Gaga’s ideas.

Lady Gaga has had a lot of success and today she does not have to prove to anyone that she is amazingly talented. That is why for several years she has been loving to entertain her fans with new projects that are completely different from each other. When the lively tunes bored the singer, she put on an evening dress, black curls in the Cher style and stood on the stage next to the legendary Tony Bennet. Together they recorded a quiet jazz album with covers of songs by the greatest masters of the genre. Although the disc was not a spectacular commercial success, it allowed Gaga to perform in Las Vegas several times a week and regale the audience with vocals that do not need to be adorned with any enhancers.

There were also experiments with the album “Joanne”, which, contrary to its predecessors, is not full of pop hits. Gaga wanted to show her fans that under the hood of mainstream sounds, there is a girl who loves to sit down with a guitar and pull country-style strings. On the other hand, the soundtrack to the movie “Birth of a Star” revealed to the audience that the singer is a true master of ballads. Thanks to the song “Shallow”, she not only won an Oscar, but also gained new fans. 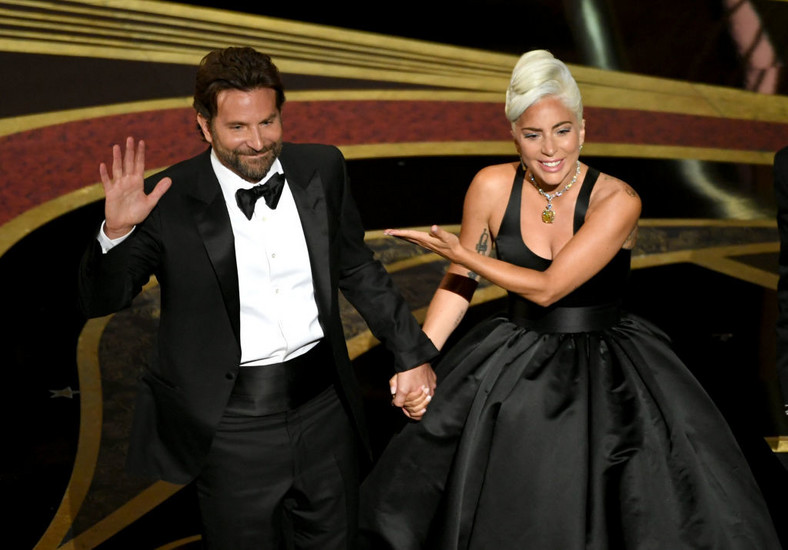 Bradley Cooper and Lady Gaga at the 91st Academy Awards (2019)

After several years of experimenting and weaning her fans from pop icing, Lady Gaga wanted to go back to her roots. The latest album “Chromatica” is pure fun – not only music, but also image. The singer’s theatricality and strange costumes returned to the salons. As if that was not enough, Gaga invites fans on a cosmic journey to a planet where everyone has to be just themselves …