On the night between Monday 26 and Tuesday 27 September, NASA’s DART (Double Asteroid Redirection Test) probe will hit an asteroid to change its path, a first test of a system that could one day prove essential to avoid disastrous collisions with Earth. The experiment will take place about 11 million kilometers from us and will involve Dimorphos, a small asteroid that does not risk ending up against our planet and which will continue to have a safe course even after the impact with the space probe.

In our imagery – powered mostly by some science fiction movies like Armageddon – asteroids must be absolutely destroyed before they can do any damage, perhaps with the sacrifice of brave crews and the use of some nuclear weapon. In reality, the systems hypothesized so far contemplate less drastic solutions, namely the use of probes that intercept the asteroids when they are still very far from the Earth and divert their path with a minimum impact.

Thanks to the detection and tracking systems, in recent decades it has been possible to catalog almost ten thousand asteroids with a maximum size of at least 140 meters, which in the event of a collision with the Earth could cause great devastation on a regional scale. To date, no known asteroids pose a direct threat to Earth for the next century, but things could change and it’s best to be prepared.

Almost all asteroids are found in the “main belt”, the large ring of debris that revolves around the Sun between the orbits of Mars and Jupiter. They are considered relatives of terrestrial planets, like ours, even though they are much smaller and rarely spherical. The most shared hypothesis is that they are what is left of the “protoplanetary disk”, the large mass of gas and dust orbiting the Sun billions of years ago from which the planets and natural satellites of the solar system were formed. 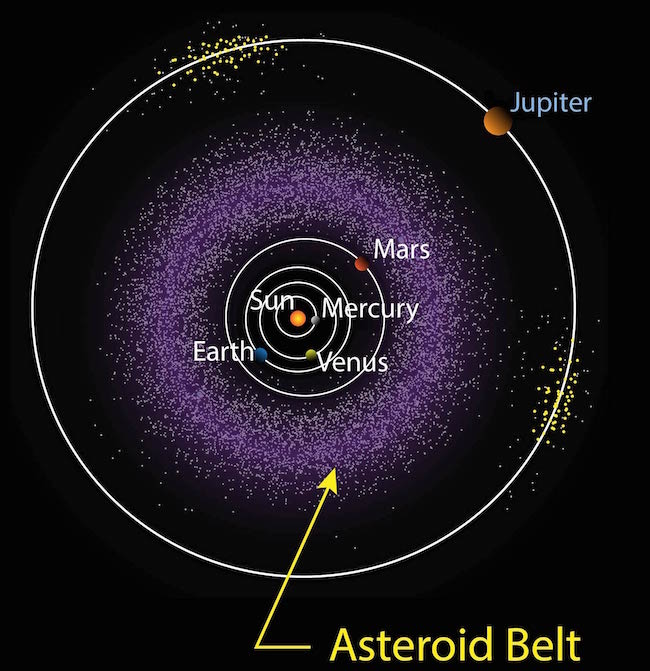 These asteroids are billions and, although there is – er – a lot of space in Space, sometimes it can happen that a collision or some other event occurs that disturbs their orbits and brings them closer to Earth. These wandering asteroids (that is, those that for some reason have come out of their orbit) are kept under control more than the others and various research groups have worked on experimental solutions to deflect them, that is, to change their path.

Among the most explored and considered promising techniques is that ofkinetic impactor, which consists in hitting the asteroid with a probe when it is still very far from us, so that its new path does not cross that of our planet. Asteroids do not have a homogeneous density, they have very different shapes and other characteristics that are difficult to predict and include in a simulation. However accurate, computer simulations are not sufficient to fully predict the kinetic effects of impact and consequently real-world testing is required.

From these considerations the DART mission was born, which after a few years of preparation had left at the end of November 2021 to reach Dimorphos. The small asteroid has a maximum width of 160 meters and travels in the company of a larger asteroid, Didymos, whose maximum diameter is 780 meters. DART is reminiscent of medium-sized artificial satellites orbiting the Earth: it has a mass of over 600 kilograms and its central body is almost cubic, with 1.3 meters on each side. 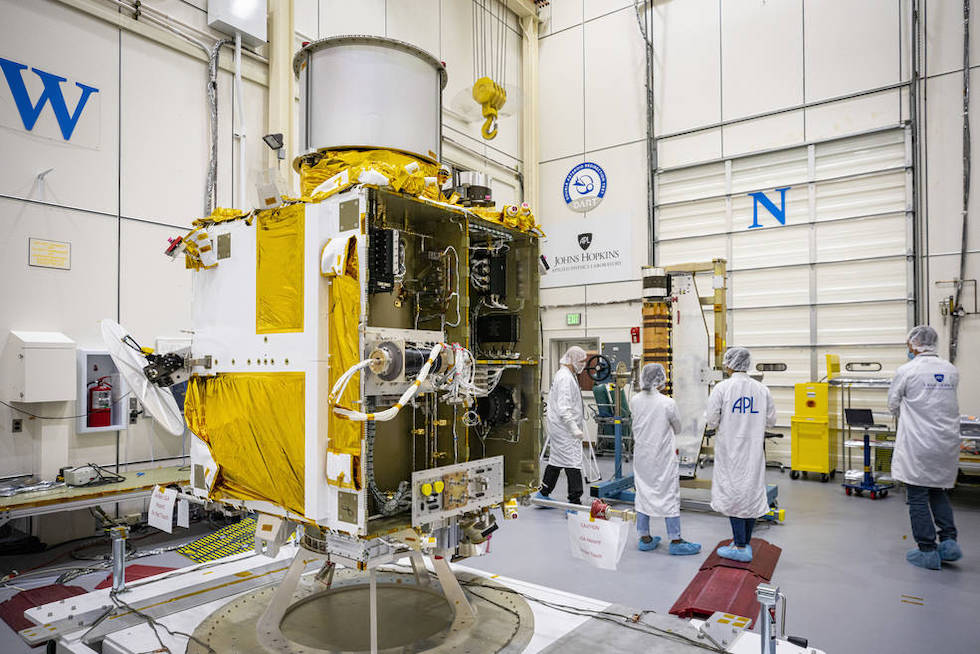 DART will have to guide itself towards its goal using the automatic navigation systems it has on board, which have the task of automatically distinguishing the largest asteroid from the smallest one and finally to center the goal. NASA is confident that everything will work as planned, even if there is a chance – however small – that systems will be misled by an unexpected shape or shadow, causing DART to miss the asteroid.

In its approach before the collision – which will take place at 1 and 14 minutes in the morning of Tuesday 27 September (Italian time) – DART will send an image per second towards the Earth, showing the progressive approach to Dimorphos. From a small bright spot, it will appear bigger and bigger until the images stop following the destruction of DART. However, there will be a witness to observe the consequences of the impact: LICIACube, a small satellite (cubesat) about the size of a shoebox, financed and managed by the Italian Space Agency (ASI).

The cubesat was developed by a consortium of Italian research institutions and universities, under the guidance of Elisabetta Dotto of the National Institute of Astrophysics (INAF – Astronomical Observatory of Rome). The Politecnico di Milano took charge of the mission analysis, and the University of Bologna of the orbital calculations; the scientific part is handled by the University of Naples “Parthenope” with the IFAC-CNR and with INAF which coordinates the scientific team. The construction of LICIACube, on the other hand, was managed by Argotec, a space company in Turin specializing in the production of microsatellites. 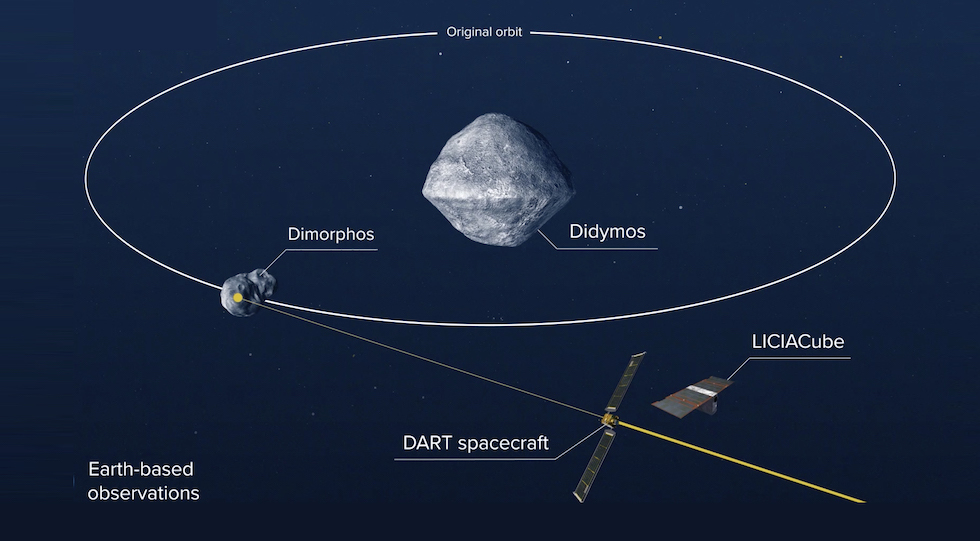 After traveling for almost a year with DART, LICIACube has separated from the probe to position itself about a thousand kilometers away from the impact, but is planning to travel to Dimorphos to make a close pass at 55 kilometers. The cubesat will not resume the actual impact in real time, but after a few minutes it will collect data that will allow to analyze the structure and evolution of the debris cloud, which will rise following the impact. His observations will also be valuable for obtaining data on the characteristics of the asteroid’s surface, and on the crater that will form at the time of the collision.

Dimorphos will also be kept under control at great distances, with numerous telescopes on Earth and with the Hubble and James Webb space telescopes, the most powerful observatory in Space that has just entered fully into service. The observations will be used to measure the slightest variations in the apparent brightness of the asteroid and its companion Didymos, in order to verify that the orbit has changed. They will also be used to collect data on the cloud that will occur following the impact, which is important for calculating the extent of the clash and estimating its consequences. 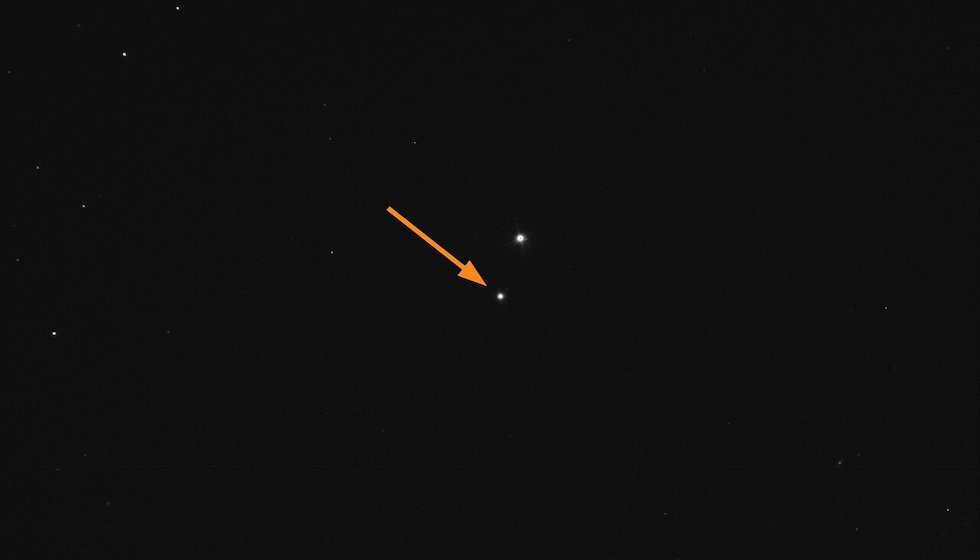 The arrow points to the asteroid Didymos, observed by the Very Large Telescope (VLT) of the European Southern Observatory (ESO) in Chile, Dimorphos is not visible

Keeping an average distance of around 1.2 kilometers, Dimorphos makes a complete loop around Didymos every 12 hours. After the impact with DART, the small asteroid should get slightly closer to the larger one, reducing the orbital period by about ten minutes, that is the time it takes to complete each revolution around its companion.

Since the two asteroids are not very large, the observations will be mainly dedicated to detecting variations in brightness. From our vantage point on Earth, Dimorphos passes in front of and behind Didymos, continually producing small eclipses. By calculating their duration, it is possible to calculate the speed with which the smaller asteroid revolves around the larger one, obtaining data to verify variations in the duration of the orbital period. 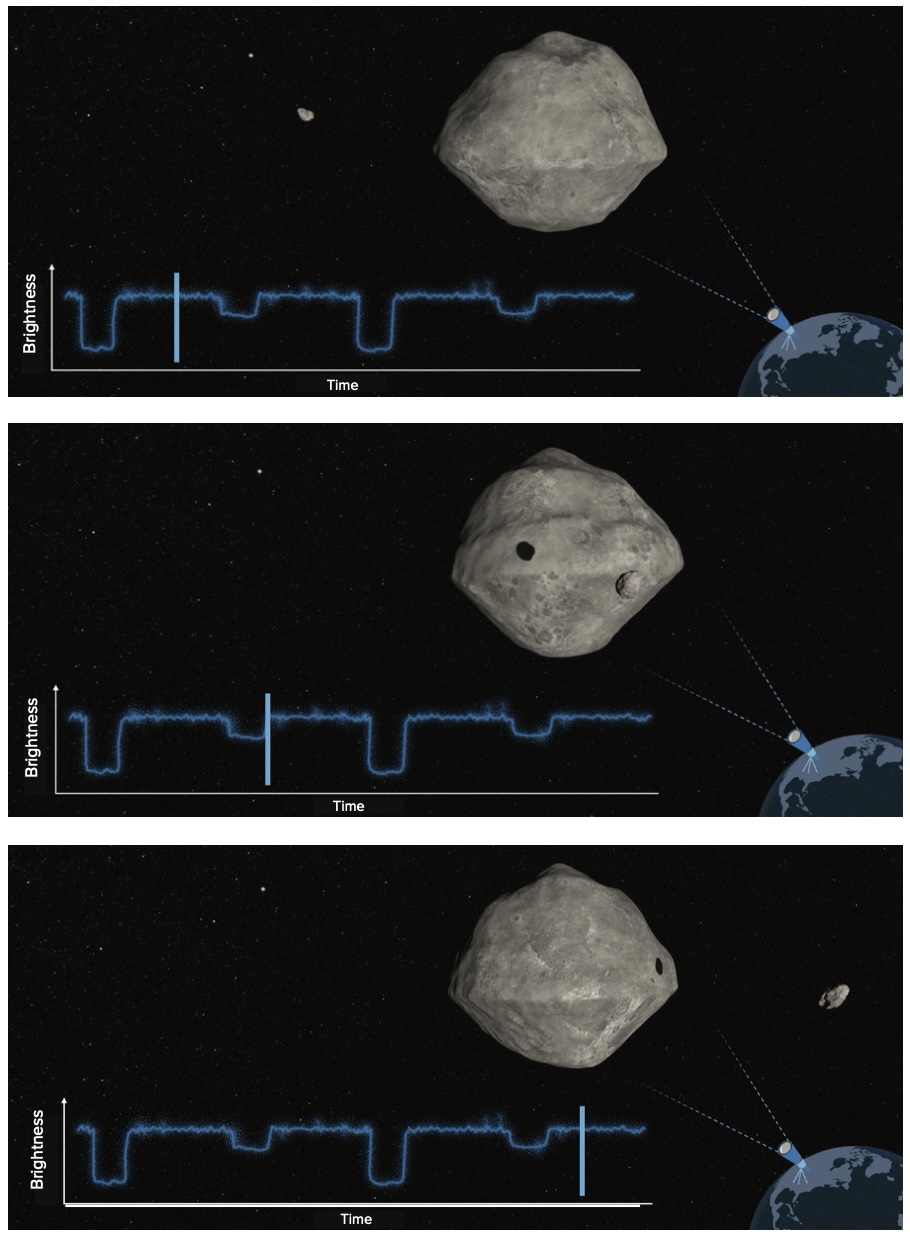 The three images in sequence show how the passage of Dimorphos in front of Didymos causes a reduction in the apparent brightness of the latter, which can be measured from the Earth (ESA)

In the months after the impact, the two asteroids will continue to be observed to assess the outcome of the mission. The European Space Agency (ESA) is also planning Hera, an initiative to visit Dimorphos and Didymos again in the coming years and provide new details on their conditions. The new mission is part of the Asteroid Impact and Deflection Assessment (AIDA), an important collaboration between space agencies dedicated to the study and development of systems to deflect asteroids.

Listen to the Post’s “It Takes Science” podcast with the story of the DART mission, on platforms like Spotify and Apple Podcast, or on the Post app.

He likes dogs, pizza and popcorn. Already a fanboy of Nintendo and Sony, but today throws anything. He has collaborated on sites and magazines such as GameBlast, Nintendo World, Hero and Portal Pop, but today is dedicated exclusively to Spark Chronicles.
Previous “Danger when opening the bottle”, withdrawn a food supplement, here are Marca and Lotti
Next Bills, the cold arrives: how to save on heating?