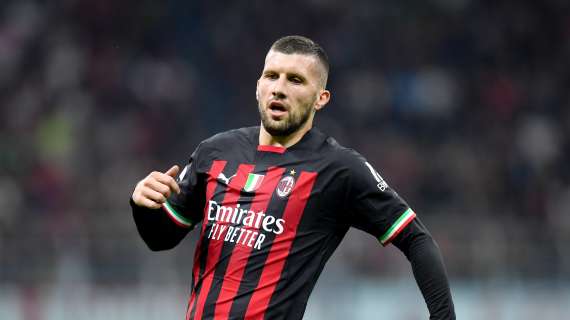 LIVE MN – Towards Dinamo Zagreb-Milan: CDK favorite on Krunic, Rebic on the right

15.06 – Milan are preparing to play against Dinamo Zagreb. Pioli’s team will have to pay attention to the yellow cards, in fact there are three players who are warned even if only two risk missing the last match against Salzburg: one of these is in fact Tomori who, by virtue of the red remedied in the last home match with Chelsea he will not play at Maksimir tomorrow. The suspects present in Zagreb are Krunic and Ballo-Tourè.

14.53 – Ante Rebic, interviewed by SportMediaset, spoke thus in view of the match against Dinamo Zagreb:

On his emotions in returning to play in Croatia: “I don’t have many emotions, I come from the south of Croatia. Here I have many friends, but for me it is a match like any other”.

On the match: “They have not lost for many months at home. They have also beaten strong teams here. We know what awaits us, we have prepared well and therefore we hope to bring home the three points.”

On Dinamo’s strengths: “They play at home and will have more confidence in the match in Milan. But nothing changes for us, we want to win and go through.”

On his moment: “It would be nice to decide the game, but the important thing is to win. It doesn’t change anything for me to play from the first minute or enter a game in progress, I always give my best.”

14.14 – The Pole Szymon Marciniak will referee the match between Dinamo Zagreb and Milan, valid for the fifth day of the group stage of the Champions League and scheduled for today at 21 in Croatia; this is the second time for him with the Rossoneri: the first and only was last year, when Tonali and his teammates lost 3-2 at Anfield with a goal disallowed for offside to Kjaer and a penalty awarded to the Reds at the hands of Bennacer.

13.25 – These are the referees nominations for Dinamo Zagreb-Milan, a match valid for the fifth day of the Champions League groups:

12.04 – Tonight’s match between Dinamo Zagreb and Milan, valid for the fifth day of Group E of the Champions League, will be played in a fully booked Maksimir stadium (around 35,000 spectators). As reported by La Gazzetta dello Sport, between 12,000 and 1,500 Rossoneri fans are also expected.

11.10 – AC Milan’s defensive emergency continues, which tonight against Dinamo Zagreb will have to do without, in addition to Maignan, also Calabria, Florenzi, Dest and Tomori (the first three are injured, the Englishman is instead disqualified). They are also joined by Thiaw who will not be able to play as he has not been included in the UEFA list. Therefore obligatory choices for Stefano Pioli who will deploy this rearguard: Kalulu on the right, Kjaer and Gabbia in the middle and Theo Hernandez on the left. La Gazzetta dello Sport reports it this morning.

10.08 – As today’s edition of Corriere della Sera explains, Stefano Pioli still does not know if he will be able to count tonight against Dinamo Zagreb on Brahim Diaz, who suffered a contracture in his left buttock on Saturday against Monza. The Spaniard flew to Croatia yesterday afternoon with the rest of his teammates and this morning to make a decisive audition to see if he can at least go to the bench.

09.39 – The great doubt of Stefano Pioli’s formation, as often happens this season, is on the trocar where there are three players in the ballot for a shirt, namely De Ketelaere, Krunic or Diaz: according to La Gazzetta dello Sport, the favorite for starting from the first minute is the young Belgian playmaker.

09.09 – According to reports from La Gazzetta dello Sport on newsstands this morning, Brahim Diaz, who suffered a contracture in his left buttock on Saturday against Monza, will test today in Zagreb to see if he can at least go to the bench in the Champions League match against Dynamo.

Friends of Milannews.it, thanks to our textual live we will keep you updated on all the news that will arrive from Zagreb in view of tonight’s Champions League match against Milan at Dinamo. The kick-off of the match is scheduled for 9pm. Stay with us !!!

David Martin is the lead editor for Spark Chronicles. David has been working as a freelance journalist.
Previous IPad 2022 and iPad Pro M2 review – Andrea Galeazzi
Next Gay couple publishes photos of their last kiss and then takes their own life: “Happy ending, we decided it together”