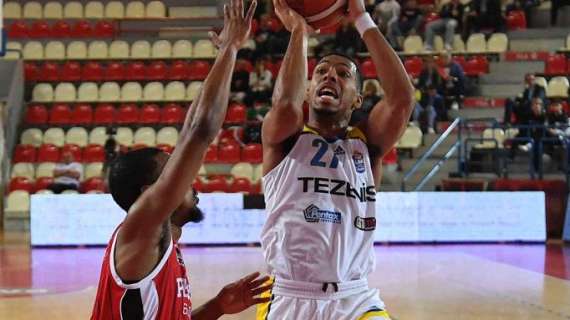 At the PalaScapriano of Teramo day of finals for the “Trofeo ‘Abruzzo” tournament. With a duo ball at 17:30 they take the field Tezenis Verona And Carpegna Pesaro Ham for the conquest of the 3rd place. The two teams met in yesterday’s semifinals AEK Athens and Bayern Munich respectively.

Comment. The Carpegna Prosciutto VL Pesaro – without Cheatham and Delfino – deservedly won third place in the “Trofeo ‘Abruzzo” in Teramo. Coach Repesa’s team has always been ahead under the direction of Abdul-Rahman and Tambone. In the last minutes, two important triple by Moretti that are worth the victory. On the other hand, a Verona – without Selden – between ups and downs. Holman does not shine tonight, while the excellent performances of Udom and Casarin should be noted.

4Q – Udom, author of a good game so far, is 5-0 at the beginning of the last period for -5. But Pesaro has Abdul-Rahman: triple of 66-59 with 8 ‘to play. Imbrò immediately returns on the other side and -4. Udom extra pass for Johnson, foul and basket: Verona at -1. Lost by Holman, Tambone is fouled on the counterattack: 2/2. The same comes out of the blocks for the triple of 71-65 with 4:40 at the end. Johnson’s offensive rebound which converts with two points. He grabbed to score from below after Holman’s offensive rebound, Tezenis back down to -2. Nice exhaust from Toté for the triple from Moretti. Verona does not give up and Cappelletti immediately realizes penetration. But Moretti disagrees: another triple from the former Olimpia of 77-71. Abdul-Rahman also hits the three-point line from behind. Holman uses the pivot well and scores -5: 43 seconds and score 80-75. Mazzola is wrong, after the timeout Verona loses the ball with an irregular block by Johnson that closes the game. Carpegna Prosciutto VL Pesaro wins with the final score of 82-77 over Tezenis Verona. Soon the final scoreboard.

3Q – Timed drum stopped marks the first point after the restart. Holman exploits the mismatch if he scores the first two from the field, 49-38. Mazzola’s bomb, his third. While Holman realizes again from the area. Udom bomb of -7. Great basket by Abdul-Rahman who tries to unblock Pesaro, slowly in this second half start. Nice action by Vuelle, Toté stopped irregularly from below: 2/2, +9. Mazzola again from a long distance, replies Imbrò. Anderson’s penetration that unlocks, first two for him. Bravo Visconti who leans left from below and tries to reconstruct the advantage of Carpegna Prosciutto: 63-54 after 30 ‘.

2Q – Good moment of Mazzola, from three the basket of +13 and coach Ramagli stops the game. Casarin puts the first two points of his game, Johnson replies and Verona shortens to -9, 31-22. Pick and roll, Abdul-Rahman raises for Toté’s support. Bomb of Visconti, then the penetration of Moretti of 38-22. Triple out of the blocks for Udom. Smith crushes -11, tries to get back to the Verona race. But another two-player game on the other side and Kravic makes 2 + 1. Tambone from the average marks +14. The same stops Casarin irregularly, 2/2 to the free. Abdul-Rahman fishes under Toté by two points from below. Good transition Verona and Casarin from below puts two on hand. Nice play by Cappelletti, Verona at -10. Moretti’s free end the first half at 46-34.

1Q – Holman opens the race with a fadeaway, replies Abdul-Rahman who puts four in a row. For Verona 2 + 1 by Smith and Cappelletti’s shot from the average served well in the area: 6-7. He hits Tambone twice from the corner, 8-0 partial and timeout at 14-7. Partial which increases after the minute of suspension up to 19-7 (13-0). Candussi interrupts the opponent’s streak. Offensive rebound by Imbrò who scores two points of 21-12. Moretti’s alley-oop for Kravic’s dunk. Xavier Johnson closes the period with a triple from the tip of 23-15.

David Martin is the lead editor for Spark Chronicles. David has been working as a freelance journalist.
Previous Electricity and gas bills, new increases from October 1st. And in 2023, the bill is increasingly high for families and businesses
Next NATO alarm, Dutch plane bound for Rome loses radio contacts: two Eurofighters sent