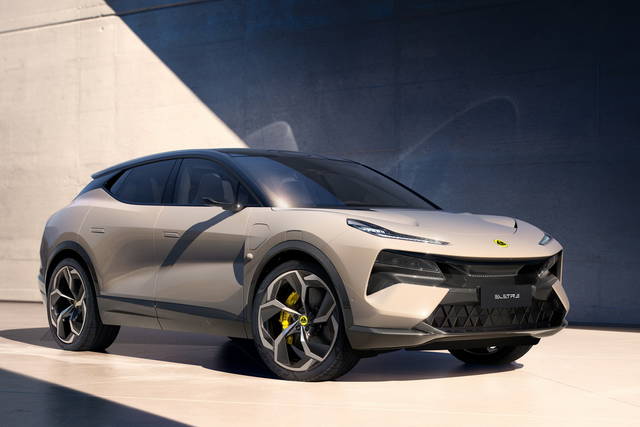 Lotus Eletre: the prices of the electric supersuv

The house of Hethel has disclosed the prices of the electric SUV Lotus Eletrewhich will be available in Italy in three versions: Eletre, Eletre S and Eletre R, with respective prices from 98,490, 124,090 And 154,890 euros. The arrival in the dealerships is expected during the first half of 2023.

Two versions of powertrain. The Lotus Electric and Eletre S they are equipped with two electric motors for a total of 603 PS and 710 Nm of torque, with aautonomy maximum of 600 km. In the case of the Eletre R the two electric motors deliver 905 CV and 985 Nm of torque, with autonomy dropping to 490 km. The performance is like a thoroughbred supercar: the Eletre R, for the home, jumps from 0 to 100 per hour in less than 3 seconds. The accumulator is common to all three configurations and has a capacity of 112 kWh. The on-board charger accepts alternating current up to 22 kW, while with the direct current of the “fast” columns it is possible to go from 10% to 80% in 20 minutes.

Lots of technology on board. There Lotus Eletre uses a sophisticated multimedia system, always connected to the network, powered by two System On Chip Qualcomm 8155 capable of running the Unreal Engine from the video game sector, which allows you to create 3D content in real time. Lotus has also announced a collaboration with Dolby, owner of the famous Dolby Atmos immersive audio experience. These technologies in conjunction with Eletre’s KEF speaker system should ensure an immersive audio experience.

There equipment of the basic version of the Lotus Eletre includes the ability to select five driving modes, active air suspension, torque vectoring, LED matrix headlights, active front grille (flaps open and close), and 20-inch 5-spoke Gray Diamond wheels Turned. As for the interiors, it is equipped with wireless charging for smartphones, electrically adjustable 12-way front seats, four-zone automatic climate control, and the “intelligent cockpit” multimedia system, which includes a KEF Premium audio system from 1,380 watts and 15 speakers, an ultra-thin screen that acts as an instrument cluster, a 15.1-inch oled touch screen and a 29 “head-up display.

In Europe the Lotus Eletre It is fitted with 20-inch wheels as standard, but 22 and 23-inch variants are also available. Altogether there are five types of alloy wheels that can be combined with six brake caliper colors. At launch, you can choose from six body colors: Natron Red, Galloway Green, Stellar Black, Kaimu Gray, Blossom Gray and Solar Yellow. Others will follow later.

There Lotus Eletre S, which starts at 124,090 euros, includes privacy windows, an active rear spoiler, configurable ambient lighting, illuminated side sills, soft closing of the doors, auto-darkening side mirrors and an air quality system. It also includes a 2,160 watt KEF reference sound system and 23 speakers. Regarding the driver assistance systems (ADAS), among the various sensors there is also the LIDAR technology for the autonomous drivingwhich will be activated with updates via the internet when the rules of the various countries allow it.

The variety offered by video games never ceases to amaze him. He loves OutRun's drifting as well as the contemplative walks of Dear Esther. Immersing himself in other worlds is an incomparable feeling for him: he understood it by playing for the first time in Shenmue.
Previous The Witcher Remake officially announced
Next Wanda Nara fired, Mauro Icardi blocks the check