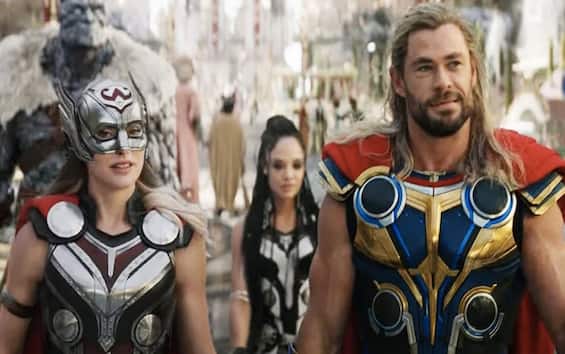 A new clip is out that offers a tasty taste of the third Asgardian adventure from Marvel and Taika Waititi. And also new posters depicting Thor and Mighty Thor were recently shared on social networks, as we show you in this article

A new commercial has come out that offers a tasty taste of the third Asgardian adventure signed by Marvel and Taika Waititi, namely the highly anticipated “Thor: Love and Thunder”.
Not only that: new posters depicting Thor and Mighty Thor were also recently shared on social networks, as we show you at the bottom of this article.

The new clip, colorful and guaranteed to increase adrenaline, increases the hype (which is already skyrocketing). Recall that the film will arrive in Italian cinemas on 6 July.
The two exclusive posters for Total Film depict the two protagonists of the film, underlining the differences between the movie characters that we will see in a few weeks: on one side there is the now well-known Thor played by Chris Hemsworth, while on the other side there is the ‘is Mighty Thor played by Natalie Portman.

You can watch the new spot for “Thor: Love and Thunder” in the Tweet video found at the bottom of this article. We also show you the new posters of the film.

Thor: Love and Thunder PG-13 in the USA. Even for partial nudity

“Thor: Love and Thunder” tells the adventures of Thor (Chris Hemsworth), accompanying him in many situations very different from those that the hero has found himself facing up to now. The journey he will undertake this time is an initiatory journey, a process in search of himself.

The longed-for peace, both internal and “external”, will be abruptly interrupted by Gorr the Slaughterer of Gods (Christian Bale), a galactic killer whose mission is unequivocal: he wants the total and complete extinction of the gods.
To cope with this ruthless antagonist, Thor will enlist the help of King Valkyrie (Tessa Thompson), Korg (Taika Waititi, who is both director and actor here, as often happens) and ex-girlfriend Jane Foster (Natalie Portman ). She possesses her magic hammer, Mjolnir, which transformed her into the heroine Mighty Thor. Together they will fight hard and embark on a cosmic adventure that will lead them to discover the mystery of the Vengeance of the Slaughterer of Gods. Will they be able to stop him before it’s too late?

The production of the film

Thor: Love and Thunder, revealed the character of Christian Bale

The film will come after the great successes of the Thor epic, that is Thor: The Dark World And Thor: Ragnarok. The latter boasts an impressive $ 850,000,000 at the international box office, a figure that crowned him ninth highest grossing of 2017. Also Ragnarok it was directed by Waititi, who is preparing to repeat the huge success (and even surpass it, hopefully).

You can watch the new spot for “Thor: Love and Thunder” in the Tweet video below. We also show you the new posters of the film.

Natalie Portman, from Thor to Black Swan: her most iconic films

Born on June 9, 1981, the actress, aged 40, has collected an Oscar and two Golden Globes. After her film debut, at the age of 13, in Luc Besson’s masterpiece, Léon, she starred in the films of important directors such as Woody Allen, Terrence Malick and Darren Aronofsky

Natalie Portman is one of the most acclaimed actress, director and film producer in Hollywood. She was born on 9 June 1981, a 40 years has collected numerous awards with unforgettable interpretations. Her career in the world of cinema began at a very young age, at 13, in the masterpiece film Léon by Luc Besson with Jean Reno

After Léonwork with directors such as Woody Allen, Micheal Mann and Tim Burton. She is very careful in choosing the parts, she rejects films like Lolita and Romeo + Juliet because she considers them with scenes that are too strong and not suitable for her age. In 1999 she plays Ann August in My lovely enemy by Wayne Wang. The director asked her to shoot a sex scene and she threatened to leave. Susan Sarandon intervened and changed the director’s mind by threatening to leave the set as well

Also in 1999, she plays Queen Amidala in Star Wars: Episode I – The Phantom Menace, by George Lucas, a film that earned her immediate success. She will then also take part in the next two chapters of the Star Wars trilogy

David Martin is the lead editor for Spark Chronicles. David has been working as a freelance journalist.
Previous Belgium Urbanball Mystery Boxes, Only on Binance NFT
Next Thor 4 | Mighty Thor and Guardians of the Galaxy appear in new photos