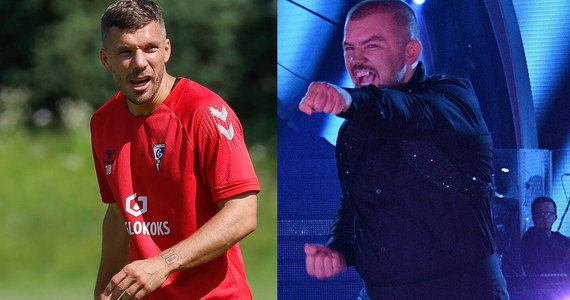 It’s been a few days since Górnik Zabrze’s victories over Legia Warsaw in the 15th round of Ekstraklasa. Zabrze defeated rivals from the capital 3-2, and one of the goals was scored by Lukas Podolski. The legionnaires are in an evident crisis, they recorded the seventh consecutive defeat, which is the leveling of the club’s disgraceful record. Whereas “Poldi” did not intend to spare its rivals at all. Not only on the pitch, but also later, after the game.

He recalled in his Twitter post a banner hung in front of fans from Warsaw on the occasion of the trip to Silesia. Its content (“Although it stinks and poverty in Zabrze, you have to go with Legia”) was against Zabrze. Lukas made an ironic comment on it.

The matter did not end there. “Poldi” took it a step further and mockingly referred to the post published by Legia fans before the meeting. In it they stated: “Let’s face it, Kraków has Wawel, Gdańsk Peasants with rakes, Wrocław drunks and what does Zabrze have? Well, nothing! there is, there is nothing.

What does Podolski say to that?

Dear Fans, on a cool November autumn evening we ‘hosted’ Legia Warsaw in Zabrze. The air was clean, it smelled only of love for Górnik Zabrze, expressed by 23,000 of the best fans in the world …

Dear Fans, On a cool November autumn evening, we “hosted” Legia Warsaw in Zabrze. The air was clean, it smelled of love for Górnik Zabrze, expressed by 23 thousand of the best fans in the world … pic.twitter.com/XhrX1ytI3d
– Lukas-Podolski.com (@ Podolski10)
November 22, 2021

Later posted subsequent entries. He emphasized that after the match with the team from Warsaw, there were three points left in Zabrze. “Górnik won, Legia lost. And the frustration and insults of Legia’s fans were useless,” he wrote. Then he added:

As befits the host, the miner gave three blows to the falling from the royal stool, intoxicated with the lapwing stench of Legia fans. Janża, Podolski and Kubica bitten. Ohh, what evening it was in a city where there is no Wawel, no Long Market, no Gothic market …

An MMA fighter decided to react to Podolski’s activity in the network, Łukasz “Juras” Jurkowski. The athlete did not mince words.

Hey, Podolski, you’re a retard. Unless you have no control over your SM account. By employing such a ram you confirm my thesis

Hey Podolski, you are a retard. Unless you have no control over your SM account. By employing such a ram you confirm my thesis https://t.co/CPLTVpNPI9
– Łukasz Jurkowski (@Jurasmma)
November 22, 2021

In discussions with Internet users, Jurkowski explained that he answered so sharply because felt offended by Podolski. Also, among some fans, Podolski’s entries evoke mixed, sometimes even hostile feelings. But there are also those who will cheer them up. And the footballer himself caused quite a storm. It is possible that the case is not over yet …

HOT AROUND LUKAS PODOLSKI. FORMER PLAYER AND THE COACH DIDN’T STAND
PODOLSKI AFTER THE FIRST GOAL IN THE EXTRA CLASS: EVERYONE KNOWS WHAT IT IS
KP

David Martin is the lead editor for Spark Chronicles. David has been working as a freelance journalist.
Previous UOKiK examines fictitious leaseback agreements for consumers
Next NATO contributes to keeping Ukraine in crisis