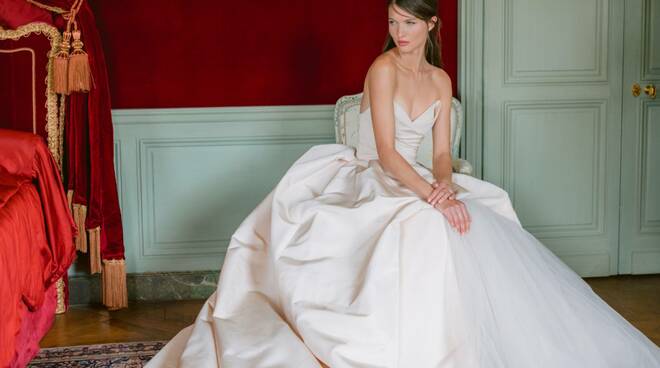 Lumos Produzioni from Ravenna made the video for the new campaign of the star stylist, Moniquie Lhuillier

The works took place at Chateau de Villette, a historic 18th century castle in the countryside around Paris, owned by the Heritage Collection. This location proved to be the perfect backdrop to promote the elegance and luxury of the brand. In addition, the garden theme returns in the print, color and silhouette of the bridal gowns from the brand’s fall collection for next year.

During the campaign, Lumos Produzioni collaborated with Jose Villa, recognized by PDN as “one of the most influential photographers of our decade”. Jose Villa’s works appear regularly in Martha Stewart Weddings, Harpers Bazaar, Vogue, Style Me Pretty and American Photo Magazine. Additionally, the photographer is known for his shots at Hollywood celebrity weddings, including Justin Bieber, Paris Hilton, Priyanka Chopra, and Nick Jonas.

Who is Monique Lhuillier

Monique Lhuillier is one stylist and creative director internationally acclaimed for its brand of wedding dresses, prêt-à-porter and lifestyle, characterized by unparalleled luxury, femininity, charm and glamor. She founded this fashion house, which still bears her name, in 1996 together with her husband Tom Bugbee. The clients of the luxury brand, which is based in Los Angeles, include American and foreign VIPs, such as Emma Stone, Blake Lively, Taylor Swift, Reese Witherspoon, Kristen Bell, Anna Kendrick and Michelle Obama.

A brief history of Lumos Produzioni

Lumos Produzioni was born with the intention of revolutionizing the approach to videography in the world of luxury events. With a refined and elegant style and bolder images than traditional videography, the Lumos Produzioni team manages to engage the viewer and capture moments full of pathos in just a few minutes of video. Thanks to this modus operandi, this Ravenna-based company has distinguished itself internationally since its foundation in 2015. Since then, it has become a reference point for the production of luxury event films and destination weddings, so much so that in recent years it has been involved in producing films for extraordinary events by leading exponents of foreign policy, celebrities and CEOs known around the world. During these works, he had the opportunity to collaborate closely with the highest exponents of the destination wedding industry, including world-famous wedding planners, photographers, designers and florists.

The campaign, video and promotional shots are available at the following link: https://moniquelhuillier.com/apps/lookbook/bridal-fall-2023.

David Martin is the lead editor for Spark Chronicles. David has been working as a freelance journalist.
Previous Femicide in Bolzano, 35 years old killed at home. The husband appears spontaneously at the Prosecutor’s Office
Next Juve, Allegri’s conference in real time