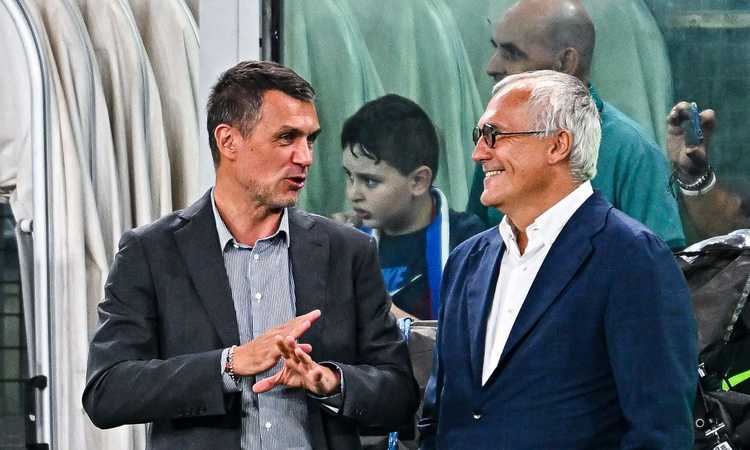 Maldini: ‘Zero doubts about De Ketelaere, remember Platini? Botman first choice, then … I believed in the Scudetto, I told Elliott to keep the January treasure ‘| Market

The director of the technical area of ​​Milan Paolo Maldini spoke at the Trento Sport Festival de The Gazzetta dello Sport. These are the most significant statements of him, starting from a background on the arrival in the Rossoneri of Theo Hernandez: “My first solo purchase was actually Krunic with whom we already agreed the previous year, it was the first thing I did on my own. Coffee with Theo in Ibiza? I used the words I would use with a child of mine. A little bit with my players I feel this paternal relationship because I know very well the difficulties they face in certain stages. I start with this advantage of being Maldini, but it is not only given by the fact that I have been part of the history of Milan. The advantage is to be linked to this club, which was great in the 50s and 60s, it was great in the late 70s, it was great with Berlusconi. She has a story that doesn’t even need to be presented, she speaks for herself. So when a player is called by this club, it is easier to believe what is being told, but then they must be true: in this way you gain trust. “

On his role as guarantor of the project: “It came from difficult years in which you did not qualify for the Champions League, you must therefore tell the players about a credible and winning project, but with reduced costs. I feel a bit like a guarantor of the Rossoneri project, and I feel it. This is normal for people not to take root in a large company, but I have them. I’ve had them since my dad came to play at Milan in the 1950s, when I went to audition at Linate, when I brought my children. “

About Giroud and the Scudetto turning point in last season’s derby: “Giroud is a champion, full stop. He has won a World Cup, plays for the national team, is an exemplary professional. The main characteristic of a champion is that he is humble and a team man. A sample comes out when it’s needed. Internally we knew that this was the opportunity to arrive at a dream, we felt it, we believed in it and the results have arrived. I wasn’t sure if I could win the Scudetto, but I believed it: I know what the team is worth. This thing I told Gordon Singer at Christmas (son of the owner of the Elliott fund), we had no budget for the market: Juventus take Vlahovic, Inter Gosens, then a small budget came out. I said: “I don’t want it, we are strong like this. From there…”.

On the new president Gerry Cardinal: “I told him my origin, my life. Gerry is a person who has energy. He wants to do, listen. I really like. The idea that is transmitted is a sort of continuity with respect to Elliott, they have taken this club which has been restored from an economic point of view and which should now be able to go back towards a slightly larger goal. A promise for the future from a Champions point of view? There is no promise, I can make the promise to you: that of not going beyond your financial limits. All this goes through a restructuring of all Italian football in general, the difference with English football is almost unsustainable: the budget difference puts us in difficulty. We have other weapons, such as history and more ideas. The safe limit of the next few years is that of revenues / investments, we will not go beyond our possibilities “.

On De Ketelaere: “First of all, the market is dynamic. We tried to catch Botman before Charles, that he would have exhausted what our budget was and we would have turned to other players for that role there. Our ideas in May compared to what happened in the end there is hardly a common thread. At this point in our journey we don’t have to take average players, but players of great prospect: Charles is one of them. He is a 2001, he showed important things in the Champions League. We need time, I know that the fans and the newspapers don’t wait, but we have to wait. I take the example of Platini who did not do well at Juventus for the first six months, then went back to winning everything. A 2001 is not ready to take on so many responsibilities in a club like Milan, we must give this balance. We know what are the ways to bring young people to grow. Bets are made on young people, but not all are won we have very few doubts about him. “

The relationship with Massara: “Knowing that Milan were looking for a DS, I received many phone calls that spoke well of Ricky. I did not know him, but talking to each other we talked about our footballing past: he had scored us goals with Pescara and Pavia. I had an interview, I liked it so much and we left. She is my age, a different path from mine and a different vision, it is fundamental. He is a great connoisseur of football, a great worker. He shares the fundamentals of life, and we are practically a de facto couple, we live in symbiosis most of the week. I liked Kjaer as a player, but I didn’t know him in detail: he insisted a lot. He’s a player Ricky has pushed a lot on. ”

On Pegs: “I knew him because I played with him in the Under 21 many years ago. I didn’t know he had this charge on the pitch which is contagious, it releases energy that is incredible. This energy is truly incredible, it manages to transmit something exceptional every day, it shares our projects, our strategies on the market. He takes no alibi. All things that we asked for and that he accepted because he is like that. He grew up and he made us grow, he is a born leader. He was considered a normal onenowadays being normal is already a great thing. It is a special relationship, we confront, we share, we fight. It is a sanguine. He has finally found an environment where he can show what he really is as a man and as a coach. Exchange of views on the market? We do not dwell so much on the names but on the profiles: at the beginning it was not like that. He told us that many of the boys who arrived did not know them. We share ideas on what is needed. ”

On Ibrahimovic: “I told him to consider himself 100% footballer otherwise we wouldn’t renew him. When he played last year he was still instrumental. Future? He has the anxiety of having to stop, but that’s normal. What will he do in life? Zlatan will do. “

On the new stadium: “I must say that coexistence with Inter in recent years has gone well. We shared trophies, the stadium, the square. It is absolutely not a problem to share the stadium. Then I don’t know what decisions will be made in the future. The clear thing, and someone who has had my story tells you, is that it is a stadium full of memories for all the Milan fans. But we want to live on memories or create something new to go and create others. Milan does not end with San Siro, it goes on. We have to create something that makes us comeptive and it is the stadium, otherwise we really remain to tell ourselves the things of the past years and it is not something that excites me very much “.

On Maignan: “What he does compared to many other goalkeepers is special. His ability to kick left and right is the best of our central players at making the ball go round. He is a modern goalkeeper, he is a fussy eater, he wants to arrive, he is ambitious. He was a very, very successful purchase, a great buy in modern football“.

On refused offers for Leao and for other Milan stars: “Did I tell someone not to even show up … For Theo Hernandez? You said so … The problem is that then they come back to charge and then you have to decide what to do. In the context of the sustainability of the club, I reiterate that we have the accounts in place and we don’t need to sell anyone. We want to keep the strongest, but the non-transferable players no longer exist“.

David Martin is the lead editor for Spark Chronicles. David has been working as a freelance journalist.
Previous He leaves the car parked in the garage, after just a month he finds it reduced like this [VIDEO]
Next live news and updates