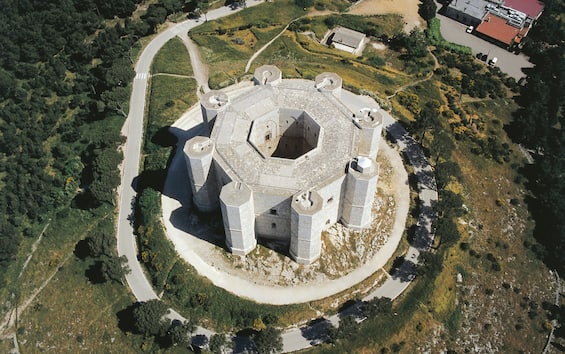 many guests expected in Andria, from Emma Marrone to the Måneskin

Many indiscretions, including social sightings and clues that are appearing on the Instagram and similar profiles of the alleged guests, offer the first tasty tastes of those who will parade among the expected parade of stars in Puglia tonight. Rumors say that Dakota Johnson, Lana Del Rey and Elle Fanning will be there, among others. Of nostrano, however, we speak of Emma Marrone and Alessandro Borghi, among others. The only certain presences are Damiano & Co., who will also perform

The treasure hunt has begun – indeed: the full names – of the guests expected at the Gucci fashion show in Castel del Monte this evening, Monday 16 May.

From the Måneskin (practically certain, since it seems that their performance is also planned) to the rumors that Emma Marrone would like to be in the parade of stars awaited in Puglia, the rumors are becoming as varied as they are insistent.

Several indiscretions, including social sightings and clues that are appearing on the Instagram profiles of the alleged guests. Even the presences in the surrounding hotels are suspicious, because either Elle Fanning, Dakota Johnson and Lana Del Rey both decided to go on holiday to Polignano a Mare in the same period (a period still considered out of season, among other things), or it means who are on the list tonight…

Apart from them, Jodie Turner-Smith is also among the top-rated for being one of the stars. Both inside and outside the metaphor, given that the Maison has adopted the strategy of associating each guest with a number corresponding to a star, with the aim of making the stars so many stars ready to “cross the cosmos”.

«An invitation to cross the cosmos. On behalf of each Gucci Cosmogonie guest, the House has adopted a star and registered it in their name», explains the brand through its social media.

Tonight’s appointment will have “repercussions on the territory with projects that will be announced in the coming days”, declares the mayor of Andria, Giovanna Bruno, in a video.

The Måneskin are now taken for granted, guests in Trani in the last few hours (in which they were besieged by wild fans). Many other names of the seven known and the seventh art – both local and international – are distributed throughout Puglia, in the many extra-luxury farms as well as in the resorts. Either it’s the trend of “mass holidays out of season” or tonight everyone will meet in Castel del Monte…

The fashion show that this evening Gucci brings to Castel del Monte, in the province of Andria, is entitled “Cosmogonie”. The stars therefore certainly could not miss the appeal …
The event will be nothing short of exclusive and exceptional, organized at the manor of Federico II, a Unesco heritage which for the first time in its history opens its doors to the world of fashion.

Castel del Monte will be totally inaccessible for those who don’t have the Gucci invitation in hand, rare and precious like the golden ticket to enter the Willy Wonka factory in short: the fashion show is reserved for only 300 people. The lucky ones who received the invitation saw a very prestigious card arrive with the various phases of the Moon represented above. Tonight will be a beautiful full moon, and the invitation even guarantees an eclipse around dawn.

Fashion, Gucci will show in Puglia on June 16 at Castel Del Monte

In the last few hours, “VIP watching” has become the favorite hobby of anyone in the wonderful Italian region. The photographic safaris of this weekend went in search of the stars arrived in Ostuni as well as in Trani.

The Måneskin have greatly facilitated the work of the fans, by publishing a video on their social pages in which it was seen that they were having dinner in Trani. The result? The place where they stay has been literally stormed by their devoted public. More than fond, we should say fervent…

A dinner at Grotta Palazzese (famous restaurant in Polignano a Mare located in a cave on the Adriatic) was one of the most eloquent social scenarios of this “Guess who” special edition star & haute couture: right in this restaurant the model Thai Davikah Hoorne celebrated the birthday, sharing photos and videos of the evening. And in the shots you can see the actresses Elle Fanning and Dakota Johnson, respectively the stars of “Maleficent” and “Fifty Shades of Grey”. Also in the same restaurant also appeared the singer Lana Del Rey, the actor Blake Lee and the actress Jodie Turner-Smith (the latter is the wife of Joshua Jackson and the protagonist of the TV miniseries “Anne Boleyn”). So either the farms where the divas have booked have half board and have agreements with the Grotta Palazzese restaurant (just kidding) or everyone is in cahoots…

There are those who talk about Lady Gaga and Iggy Pop, those who venture names pulling them out of the hats of the many Gucci testimonials, from Jared Leto to Harry Styles passing through the Italians Alessandro Borghi and Achille Lauro.
However, let’s say that the actor Alessandro Borghi as well as the singer Emma Marrone at least received the invitation, this is certain, as demonstrated by the Stories on Instagram. Furthermore, Emma is from Puglia, so not inviting her would be sheer madness.

“Cosmogonie” therefore has a theme that begins well before the start of the show, with many, many stars already protagonists of the indiscretions, waiting to enjoy the creations inspired by the cosmos of the creative director Alessandro Michele.

Måneskin not only guests: they will also play

Returning from the Turin stage of the Eurovision Song Contest, the Måneskin are not only the guests of the fashion show but they will also perform.

The most famous Roman band in our history will play at the party organized by Gucci.

Meanwhile, the area of ​​the octagonal manor of Frederick II is controlled by 250 security personnel, charged with not letting anyone pass during these hours and then only allowing it to the 300 guests this evening.

Celebrities are back in Milan thanks to Fashion Week. At the fashion show of the Maison of the double G, Rihanna stole the show accompanied by ASAP Rocky, American rapper with whom she is expecting a child. In addition to the pop star, Jared Leto, the Ferragnez and Achille Lauro were present at the Hub in via Mecenate, among others.

At the double G fashion show, Rihanna showed off her baby bump and stole the show accompanied by ASAP Rocky, the American rapper with whom she is expecting a child

Celebrities are back in Milan thanks to Fashion Week. In the photo, Susie Lau

David Martin is the lead editor for Spark Chronicles. David has been working as a freelance journalist.
Previous Taika Waititi Next Goal Wins “antidote” to Thor: Love and Thunder
Next The charity event promoted by Andrea Bocelli returns to Tuscany “Celebrity Adventures”.