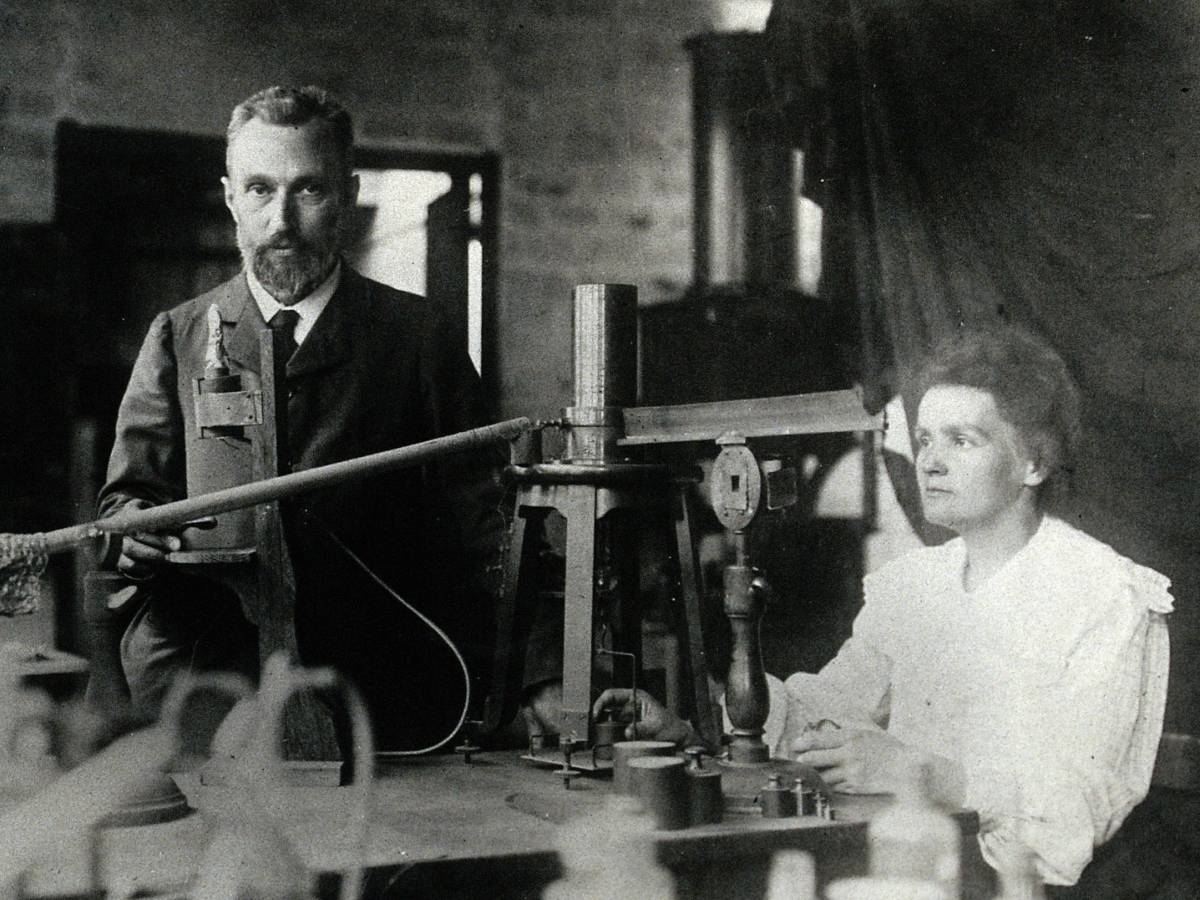 Marie Curie, the scientist “killed” by her creature

She was the first female scientist to win the Nobel Prize for physics, in 1903, and one of the few people to have also won a second one, for chemistry, in 1911. Forced to challenge the prejudices of a category that was predominantly male at the time, Marie Curie discovered two new elements, radium and polonium, was the mother of radiotherapy and radiopharmaceuticals and the first woman to teach at the Sorbonne in Paris. She is a revolutionary scientist: World Day of Medical Physics is celebrated in her honor on November 7, the date of her birth.

Maria and the first studies

Maria Salomea Skłodowska, who only later will take the name of Marie Curie, was born in Warsaw on 7 November 1867, in a Poland still under Russian rule, where soldiers patrolled the streets and higher education for girls was not covered. The last of five brothers and sisters, already in the first decades of her life he had to deal with her death, first of her due to the loss of a sister, then of her mother. The little girl began her studies of her with her father, from whom she learned a love of research.

Later Maria decided to work how housekeeper, to subsidize the studies of her sister Bronisława, with whom she will remain very close and with whom she seems to have made a pact: Maria would have taken charge of her sister’s studies in Paris and, once she graduated, Bronisława would have done the same. In 1891, Maria Skłodowska, who became Marie (in French), enrolled in the Sorbonne in Paris. In 1893 Marie graduated in Physics and in 1894 in Mathematics.

The meeting with Pierre

Immediately after graduating, Marie was awarded a scholarship to identify the magnetic properties of various steels. But the tools were cumbersome and adequate space was needed to work on research. So she was given the name of Pierre Curie, an internationally renowned scientist, interested in research and expert in the laws of magnetism, who had adequate space in his laboratory. The scientist was known for discovering the piezoelectricity, or the generation of an electric potential when the crystals are compressed. Pierre was eight years older than Marie and earned his living as a laboratory professor at the Paris School of Physics and Industrial Chemistry.

The paths of Marie and Pierre met. And the two fell in love. But when Pierre asked her to marry her she refused: her goal in France was in fact to finish her studies and return to Poland. But when the man said he was willing to follow her to Warsaw, Marie accepted her proposal and the two married to Sceauxin France, in 1895. From that moment, Maria Salomea Skłodowska became Marie Curie Skłodowska, while also maintaining her surname, a sign of independence and a desire to emancipation rare in those days.

In 1897 Marie focused on the studies of Antoine Henri Becquerel which, as he explains Focus, he had noticed that uranium emitted rays even without the presence of sunlight. The scientist investigated the phenomenon, measuring the electric currents present in uranium, detecting them with an instrument developed by her husband, the electrometer. Uranium had the ability to produce radiation independent of sunlight: this phenomenon was called natural radioactivity. But this property was not unique to uranium. Marie and Pierre observed the presence of natural radioactivity also in thoriuma metal.

The Curies examined the uranium content of the pitchblende, the mineral that is the main source of the substance. The goal was to refine the element. But what they discovered went far beyond their expectations and earned Marie Curie two Nobel Prizes, who forever changed the course of physics, with important implications in medicine as well.

The discovery of polonium and radium

In fact, Pierre and Marie noticed that some pitchblende samples were more radioactive than they would have had if they had been made from pure uranium. This meant that other elements with very high radioactivity were present in the mineral, but in such small quantities that they could not be detected by normal chemical analyses.

For this the couple decided to examine tons of pitchblende, which they found in the mines of the then Czechoslovakia. In 1898 a small quantity of a black powder was isolated, with a very high radioactivity, equal to about 400 times that of uranium. This new element was called polonium, in honor of Poland, the scientist’s country of origin. But even this discovery could not justify the high radioactive levels of the metal under study. And in fact in the same year another element was discovered, even more radioactive than polonium, which was called radio.

Both scientists, however, ignored the harmful effects that this element had on the human organism and radiation exposure occurred without any protection.

The Nobel Prizes and the last few years

Marie Curie was the first person to win two Nobel laureates in two different areas. The first of her, the one for physics, was assigned to her in 1903, together with her husband Pierre, “in recognition of the extraordinary services they have rendered in their research on radioactive phenomena “. Eight years later, in 1911, the scientist received her second Nobel Prize, the one for chemistry, “in recognition of his services for the advancement of chemistry through the discovery of radium and polonium, for the isolation of radium and the study of the nature and compounds of this remarkable element“.

Her husband Pierre was only able to attend the first conferral: he died in 1906, before Marie was awarded the Nobel Prize in chemistry. It was April 19 and Pierre Curie was hit by a cart while he was traveling along a street in Paris in the company of Marie’s two daughters. After the death of her husband, the scientist obtained the chair of physics at the Sorbonne and contributed to the medical treatment of wounded soldiers during the First World War, thanks to a radiographic equipment.

In recent years, Marie was struck by theaplastic anemia, a disease probably contracted due to constant exposure to radiation of which he was unaware of the danger. In 1934 the double Nobel laureate woman died. Even today her notes and her writings are considered dangerous due to contact with radioactive substances and are kept in special cases lined with lead, a material that isolates radiation. Her coffin, kept in the Pantheon in Paris, is also lined with lead.

The contribution to medicine

The discoveries of the Curie spouses, retraced from Corriere della Sera, they also represent an important contribution in the history of medicine. After discovering radium, in fact, Marie Curie realized that this material could have effects on tissues, being also able to destroy the cancer cells. Radioactivity could therefore be used in the medical field to treat cancer.

For a long time radium was used in radiotherapy, until it was replaced, first with other elements, then with modern techniques. Being aware of this potential, Marie Curie intentionally decided not to deposit the patent for the radium isolation process, so that the scientific community could carry out further research in this field.

During the First World War, the scientist worked to bring X-rays to the battlefield, so that they could be carried out x-rays, so as to be able to immediately diagnose the problems of the soldiers and decide on the methods of treatment. And even the studies on radioactivity allow today to know the properties and risks of radiation and their applicability in the medical field. The research of the Curie spouses on natural radioactivity is also the basis of nuclear medicinewhich uses radioactive substances, called radiopharmaceuticals, for diagnostic and therapeutic purposes.

With her dedication to research and her attachment to science, Marie Curie has accomplished some of the discoveries more sensational than physics and chemistry. She was the first woman to receive recognition and perform actions that, at the time, were usually reserved for men, proving to be a scientist destined to be remembered over time.

Videogames entered his life in the late '80s, at the time of the first meeting with Super Mario Bros, and even today they make it a permanent part, after almost 30 years. Pros and defects: he manages to finish Super Mario Bros in less than 5 minutes but he has never finished Final Fight with a credit ... he's still trying.
Previous Taurus, what an effort – Toro News
Next Wanna: review of the Netflix docu-series