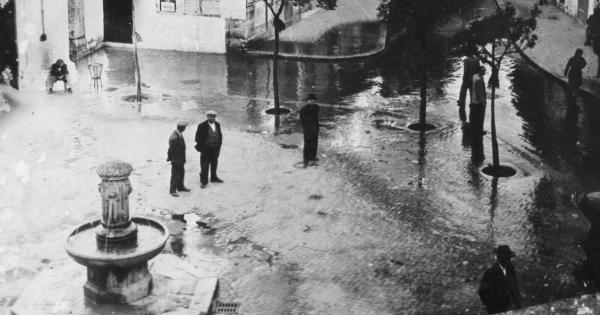 Martina, a fountain in Piazza Immacolata: the idea of ​​Angelina Jolie

MARTINA – Starting over from Piazza Maria Immacolata to open a discussion around the enhancement of the historic center. The pretext from which to start may be the proposal to re-install a fountain in the center of the Piazza dei Portici.
A few weeks ago Piazza Immacolata was transformed into the film set of Without Blood, the film that marks the return to directing for Oscar winner Angelina Jolie (below in the paparazzi photo on the set). A place that in the past had already been chosen as the location of other films and commercials, but this time the singularity lies in the choice of the production to install a fountain exactly in the place where it once was, as evidenced by one of the most famous shots of the photographer Eugene Messiah. Once, in fact, that was the market square, but also the place where people went to fill the water necessary for domestic needs. And so some of the residents of the historic center launched the idea of ​​restoring the fountain. Certainly Piazza Immacolata and many other areas of the historic center deserve to be enhanced.

Some time ago the then Municipal Council had resolved to give a mandate to prepare the necessary documents for ascertaining the ownership of the portico and arcades of Piazza Maria Immacolata and for the recognition of a financial contribution for private individuals to facilitate the maintenance of the portals historians of the ancient village. Nothing more has been heard of that provision by the municipal executive. It involved 30 thousand euros to protect the portico of Piazza Maria Immacolata and encourage the enhancement of the private portals of the historic center. The Martinese historian Piero Marinò, in a report commissioned by the Municipality, recalls that “Messrs Francesco Margiotta and his wife, Martina Colucci, granted the space necessary for the construction of the portico and free the area from some huts, obtaining, in exchange, the possibility to build some houses on the terrace overlooking the portico itself “.

Piazza Maria Immacolata, once dedicated to Giuseppe Garibaldi, is a small space in the heart of the historic center of Martina, which has always stood out as a cornerstone of the city’s economic-political activity. Place of meeting and market, scene of clashes in the Fascist era, arena of heated debates in electoral periods. Its portico has always been recognized as an example of a balanced, classic architectural layout, a source of inspiration for painters, photographers, artists, films and TV commercials.
Among the results that can be counted among the goals of the restricted traffic area is having freed the Piazza dei Portici from illegal parking during the night. The activation of the gates, in fact, allowed the local police to carry out a more precise and punctual surveillance work.

“Old Martina” has an extraordinary unexpressed potential and hides an enormous value, in a city whose main characteristic is that of having a large historic center, whose architecture is rigorously built in a wonderful Baroque style, potentially capable of arousing interest of visitors from all over the world without giving up its appeal as a place of residence.

David Martin is the lead editor for Spark Chronicles. David has been working as a freelance journalist.
Previous Billie Eilish admits she used a stunt double for her Coachella performance
Next Bermuda star of the summer, high waist and retro style is the new must-have shorts

The figure dates back to 2019, before the lockdown came to wipe out over half …