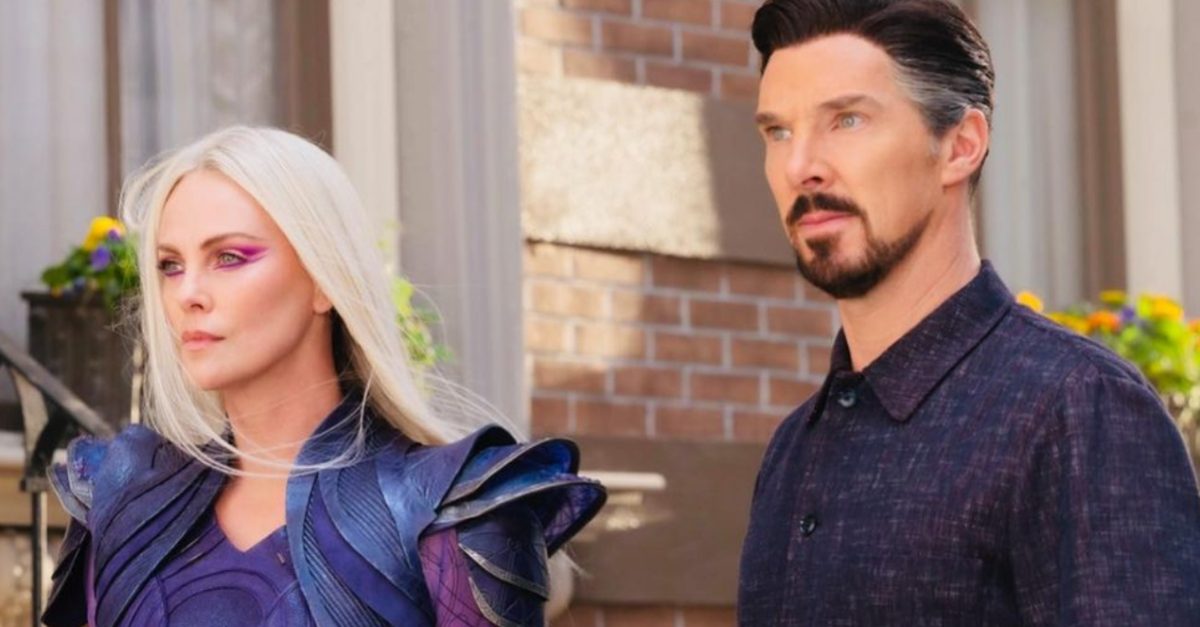 The rumors were true: Charlize Theron it’s a Marvel superheroine. A few months ago on the internet some photos of the Oscar-winning actress came out on a set probably connected to Doctor Strange. And indeed, if you have seen it Doctor Strange in the Multiverse of Madnessin Italian cinemas from May 4th, you know that this is it: Charlize Theron appears in the premiere post-credit scene.

It is the actress herself who has made the news official on her Instagram profile: she has in fact published two photos taken on the set of Doctor Strange 2: one in the foreground and one with Benedict Cumberbatch (who, to better get into the role of the sorcerer Strange, went to meditate in a monastery). Accompanied by the phrase:

Charlize Theron appears in the credits scene of Doctor Strange in the Multiverse of Madness: with purple costume and make-up, very blonde and very long hair, she manifests herself to Steven Strange while walking through the streets of New York.

He tells him that his leaps into the Multiverse (as also happened in Spider-Man: No Way Home) created a “foray” between the universes. Obviously this is not a good thing and invites him to fix it together: they then enter a portal that acts as a bridge to the Dark Dimension.

But who is Clea, the character of Charlize Theron in the Marvel movies?

Doctor Strange in the Multiverse of Madness: our interview with Benedict Cumberbatch

Who is Clea, Charlize Theron’s character in Marvel movies

Who is Clea, Charlize Theron’s character in the Marvel movies? In the comics Clea is a witch, like Wanda (Elizabeth Olsen) and Strange. Clea is the granddaughter of Dormammu, the lord of the Dark Dimension (whom Steven Strange faced in the 2016 film Doctor Strange).

The character of the witch Clea was created by Stan Lee (text) and Steve Ditko (drawings): it appeared for the first time, in November 1964, in the comic Strange Tales n. 126.

Clea is the Supreme Sorcerer of the Dark Dimension (title that in our universe was Doctor Strange, before disappearing for five years after Thanos’ blip). Despite the title, Clea is a powerful force for good and, listen, listen, is the great love of Steven Strange. Yup: in the comics Clea is Doctor Strange’s wife.

It is very likely that Benedict Cumberbatch and Charlize Theron will star in Doctor Strange 3.

Justin Timberlake and Keanu Reeves in Marvel movies too?

At the beginning of the year, together with the indiscretion of the entry of Charlize Theron in Marvel Cinematic Universe, there was also the news of a probable character entrusted to Justin Timberlake. In these days the news of an agreement between Keanu Reeves and Marvel Studios to entrust the actor with a Marvel character. We’ll see if these additions also materialize.

It is not the first time that Keanu Reeves and Marvel Studios come into contact: a few years ago the star was in fact offered the role of Yon-Rogg in the film Captain Marvel (played by Brie Larson). The part was later turned over to Jude Law, due to Reeves giving up for other commitments.