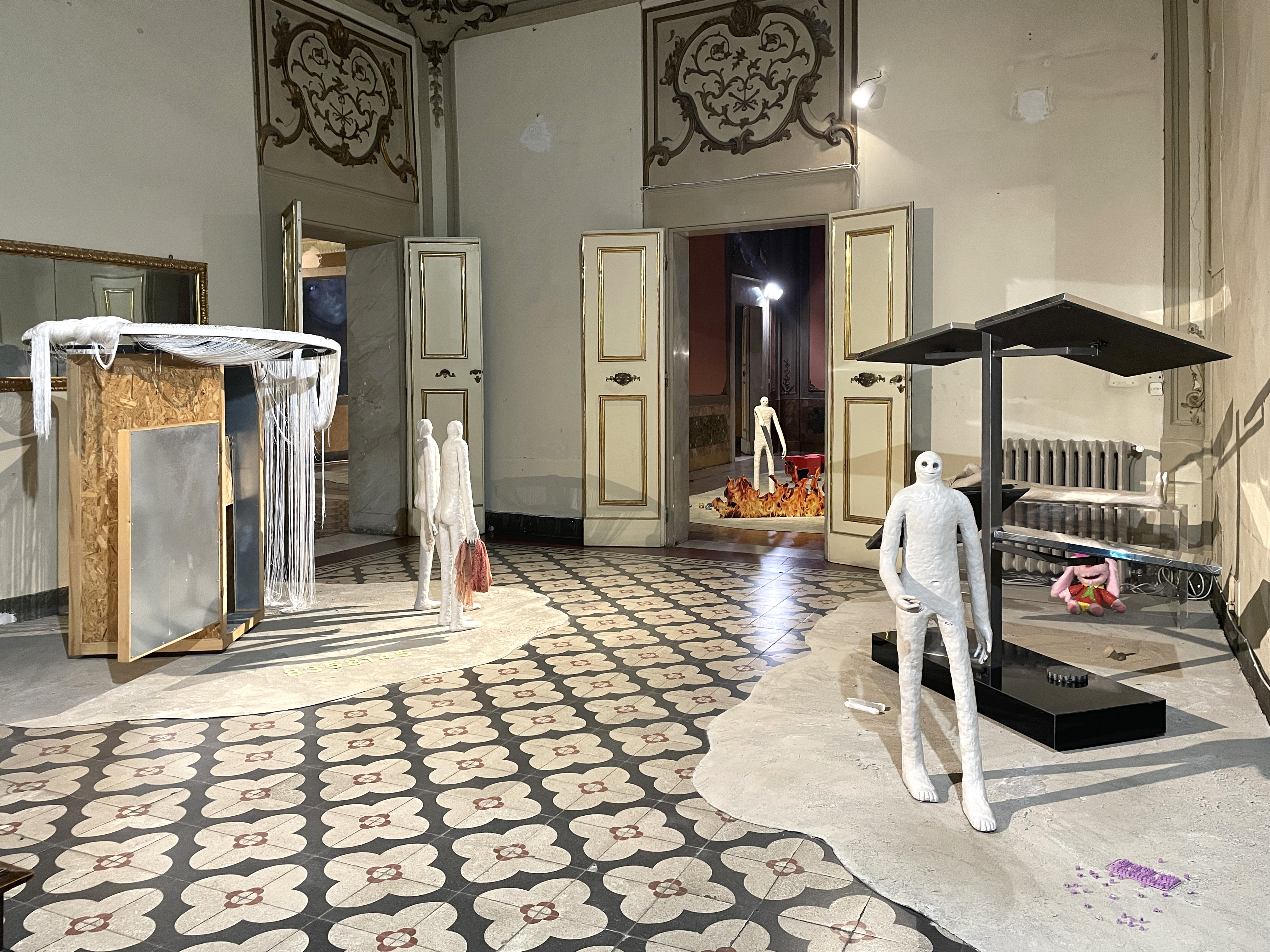 In Bologna today, 12 May, opens to the public “Above Ground “personal exhibition of Mattia Pajè (1991, Melzo, Milan), edited by Giovanni Rendinain the spaces of Palazzo Vizzani, headquarters of the association Alchemilla.
Promoted by Bologna Museums Institution | MAMbo – Museum of Modern Art of Bologna and from Alchemillain partnership with BOCA Association And Ice Dreams Ice Cream Shopthe exhibition is part of the Main Program of the tenth edition of ART CITY Bologna.

Also today at 10.30Mattia Pajè will be one of the four leading artists of the cycle ARTALK CITY. Meetings at the Academy with the artists of the Main Program, promoted byAcademy of Fine Arts of Bologna on the occasion of ART CITY Bologna 2022. The artist will talk with Giovanni Rendina and Guido Molinari, in a meeting open to the public to be held in the Aula Magna with free admission subject to availability.

“” Above Ground ” it’s a sculptural group composed of humanoid figures immersed in an installation environment. The sculptures, modeled in two-component resin, are organized in such a way as to form various anecdotal elements, readable as a cosmogony created by the artist from two visual alphabets: aesthetics new age and that of commercial television. The space in which they are installed is dotted with objet-trouvé, selected and dislocated by the artist following his experiments on products involved in spiritual and pseudoscientific practices (with curative purposes, personal growth and development of paranormal abilities), and a series of visits to the television archives that preserve installations and sets . The environment in which the objects are inserted is connected through the use of raw clay which, applied as a support island, allows the sculptural nuclei to emerge from the same indistinct gray layerThe organizers explained.

We talked about it with the artist, the curator and the artistic director of Alchemilla in the interview below. 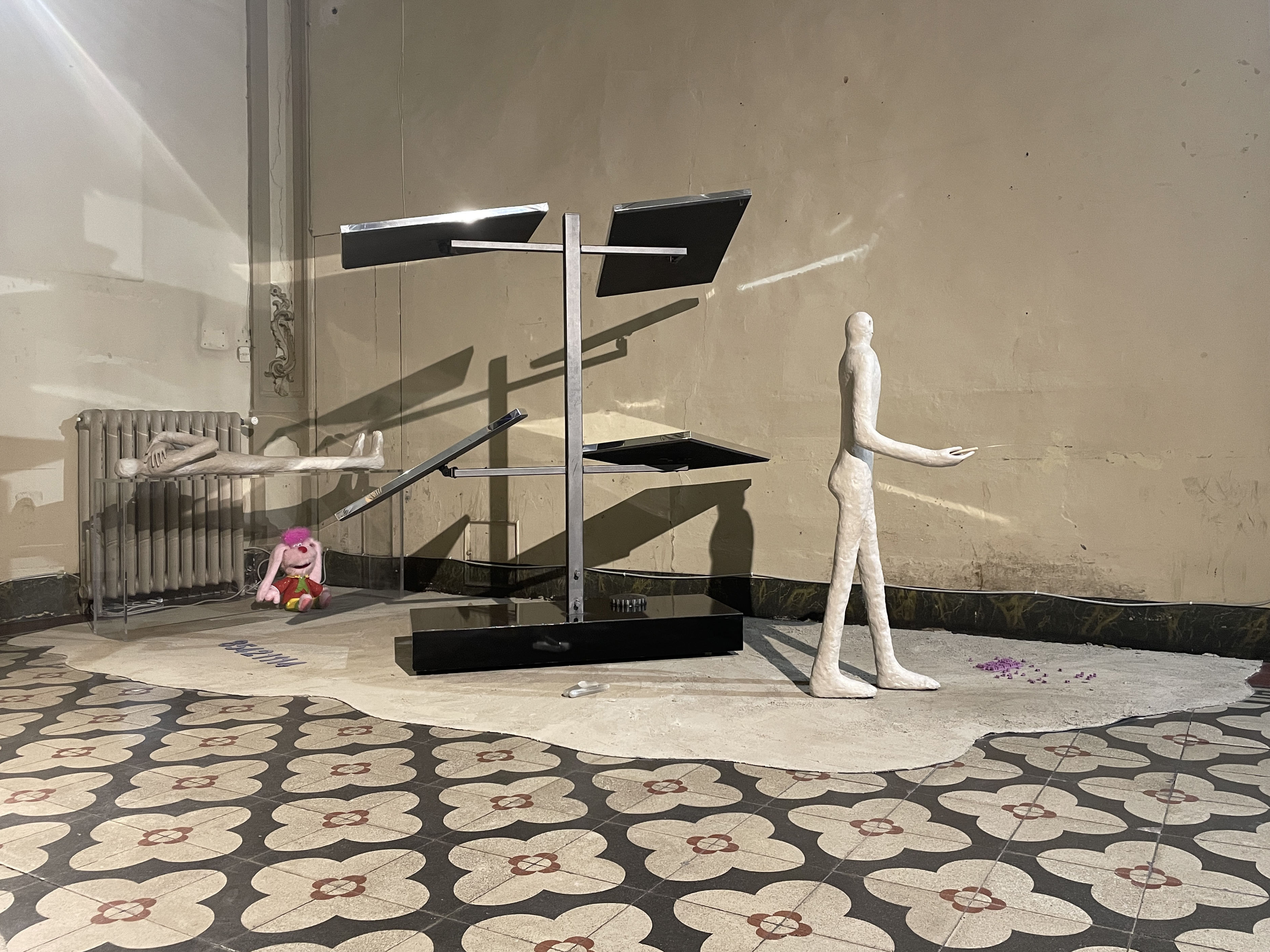 How was the “Fuori Terra” exhibition project born and how does it fit into the activity of the Alchemilla Association?

Giovanni Rendina: «The project was born two years ago from the desire of Mattia Pajè to think about the concept of truth. In the following months Pajè developed an exhibition device that, taking up the structure of the dioramas, could combine two visual alphabets: the new age aesthetics and the aesthetics of commercial television. Within these self-built dioramas, enigmatic scenes open to the viewer are composed.
Alchemilla immediately proved to be an excellent destination for the project. In fact, thanks to its character as a forge and laboratory, it was possible to assemble an installation designed to transform five rooms of Palazzo Vizzani, within which the exhibition space and the residence for artists of Alchemilla are located. The support of Art City was also fundamental for the realization of the exhibition, which supported the project when it was still in an embryonic state ».

What aspects of Mattia Pajè’s research emerge, in particular, in the work on display?

Giovanni Rendina: “Within” Fuori Terra “it is possible to trace Pajè’s attraction to a series of products involved in spiritual and pseudoscientific practices with healing purposes, personal growth and the development of paranormal abilities, which, intertwining in portions of sets that belonged to television sets, give life to a very personal and chaotic world. This universe is built by the artist in an indefinite way through what can be interpreted as a playful and paradoxical exercise in the production of truth, which leaves the viewer the possibility of deciphering and reconstructing it, inverting the scale of the composition: the extremely intimate or the ‘extremely alien, the inner cosmos and the celestial cosmos ». 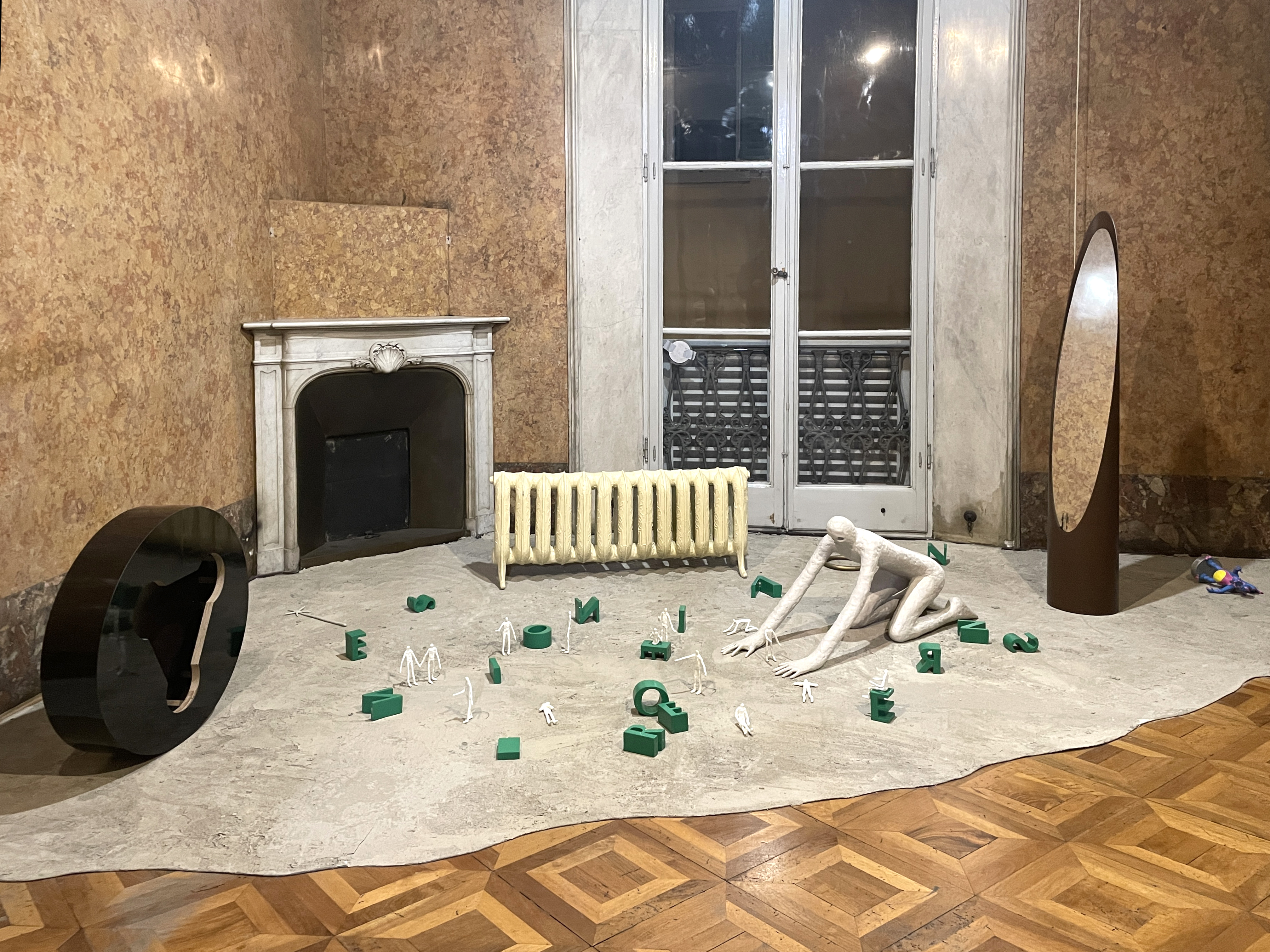 What will be Mattia Pajè’s next exhibition projects?

Mattia Pajè: «Linked to my personal“ Fuori Terra ”it will come out 1, an artist’s book that is structured like an enigmatic manual of 96 pages, created thanks to the contribution of the Fondazione del Monte of Bologna and Ravenna and the Viaindustriae publishing house. Curated by Giovanni Rendina, with the graphic design of Marco Casellacollects the texts of Flavia Monceri, Stella Succi, Giovanni Rendina, Bruno Paura And Mariagrazia Ciaccia, Simone Romagnoli, Seventh Catalan. The textual contributions reason on the idea of ​​truth interspersed with pages of notes, aphorisms, diagrams, instructions, tables and drawings from a dozen of my notebooks written between 2010 and 2021 and from a vast digital archive collected in the same years.
At the end of May I will finish a residency period in Porto San Giorgio, in the Marche region. I am developing a project for L’Approdo, a small building of marine origin that overlooks the harbor and which will house my studio. It is managed by the Karoussell association which has been operating in the area for years, involving contemporary artists and artists and encouraging an encounter with local realities. With the curator of the project, Matilde Gallettiwe are thinking about a final exhibition of the residence, which will probably have to do with the numerous sightings of UFOs in the port area and in the surrounding areas ».

What will be the next appointments with the programming of the Alchemilla Association?

Camilla Sanguinetti (Alchemilla artistic director): “In June we will be involved in the creation of an artistic residency that will involve Allison Grimaldi Donahue (artist) e Giulia Cava (scientist), in collaboration with eXtemporanea, a community of young scientists, and which will be presented as part of Scienceground, the scientific project of the Mantua Literature Festival. The sixth residency of the Residenza-Studio project conceived by Alchemilla will also take place within the summer and will involve an artist under 30, selected through a call and a scholarship made available by the Zucchelli Foundation for the students of the Academy of Fine Arts. from Bologna. After the summer, however, we are very happy to host an exhibition project conceived for the twentieth anniversary of the Carlo Zauli Museum, curated by the curatorial collective NN. The presentation of publications and artistic projects will continue in collaboration with the Modo Infoshop bookshop, as well as the research and production activities of the artists David Casini, Zheng Ningyuanthe trio Dead dog, Chadwick Mejer And Milena Rossignolipresent in the Alchemilla ateliers ». 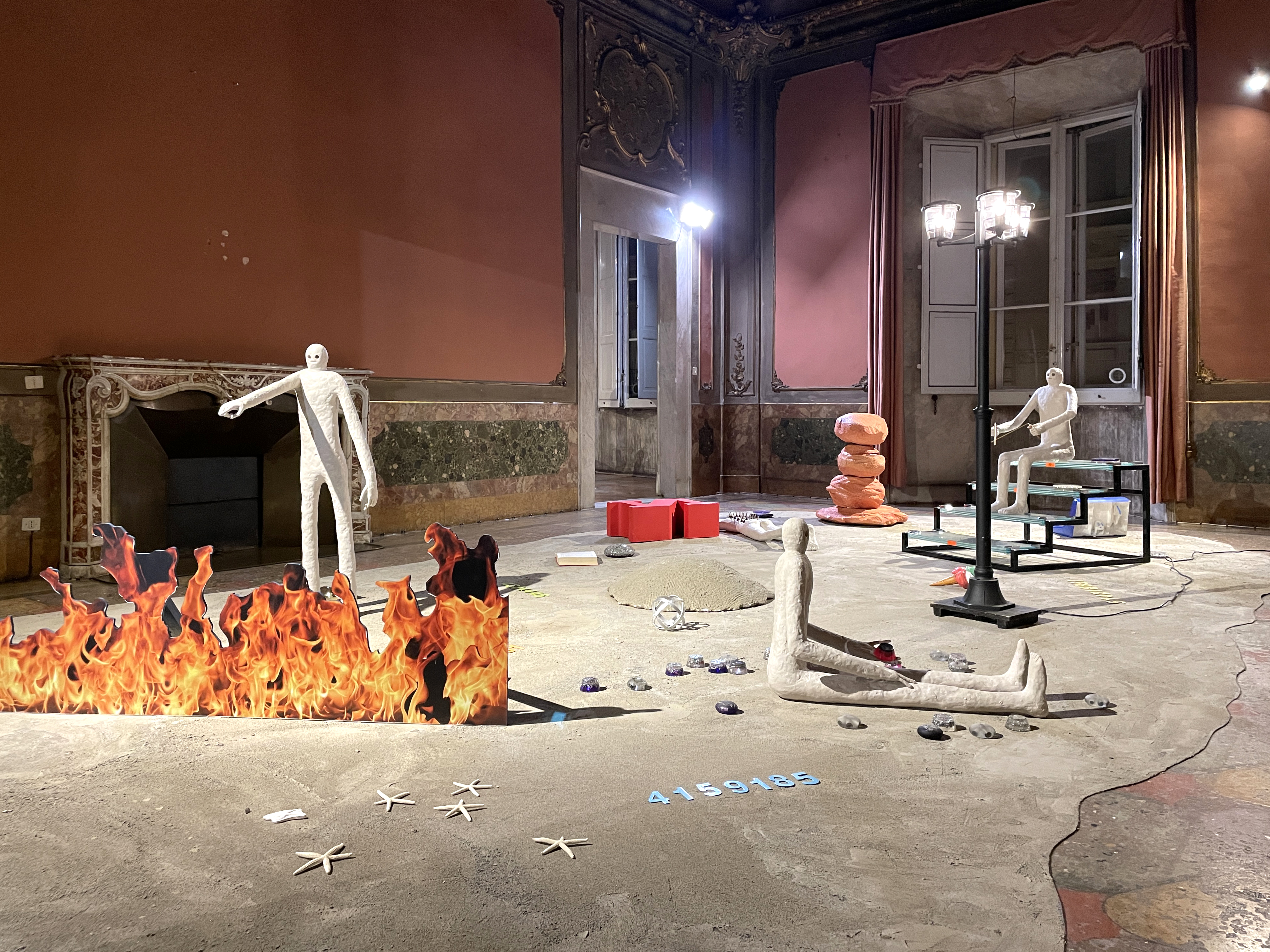 David Martin is the lead editor for Spark Chronicles. David has been working as a freelance journalist.
Previous Empoli opens the first hotel for bees in the Serravalle Park
Next the actor Stanley Tucci in town for the program “Searching for Italy 2” The photos Shooting of the film “Fast X”, the modifications of the GTT lines from 27 to 29 May 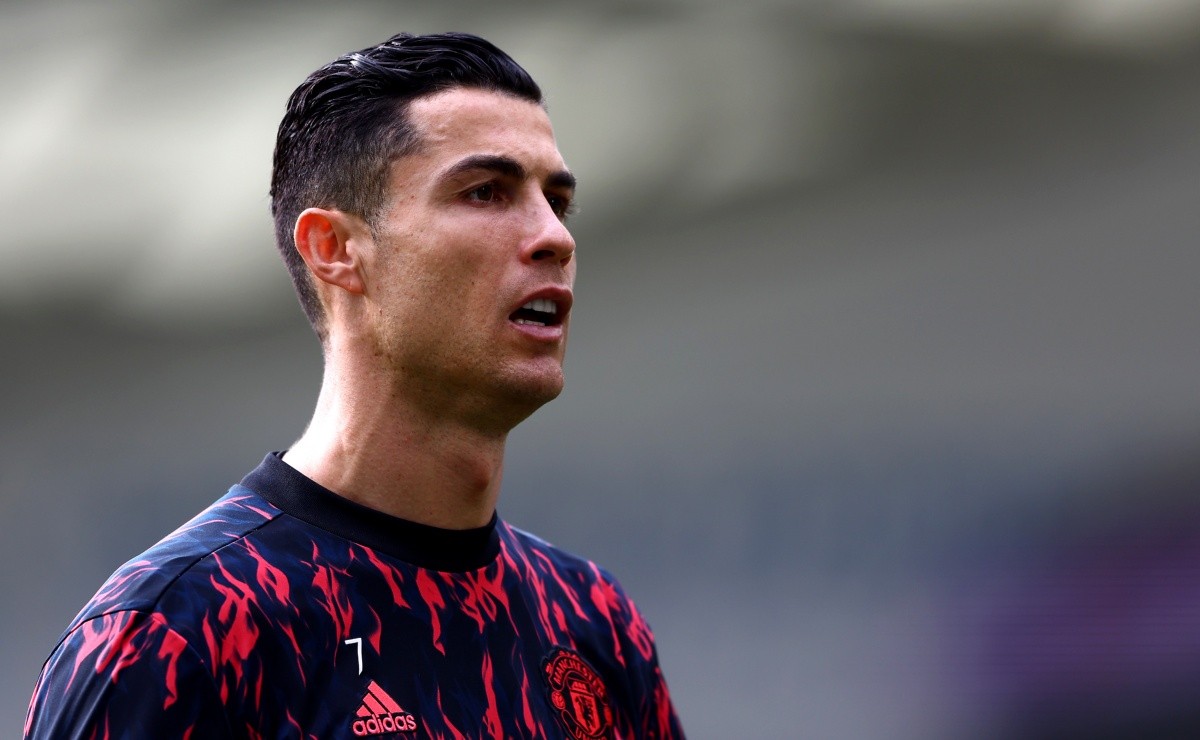 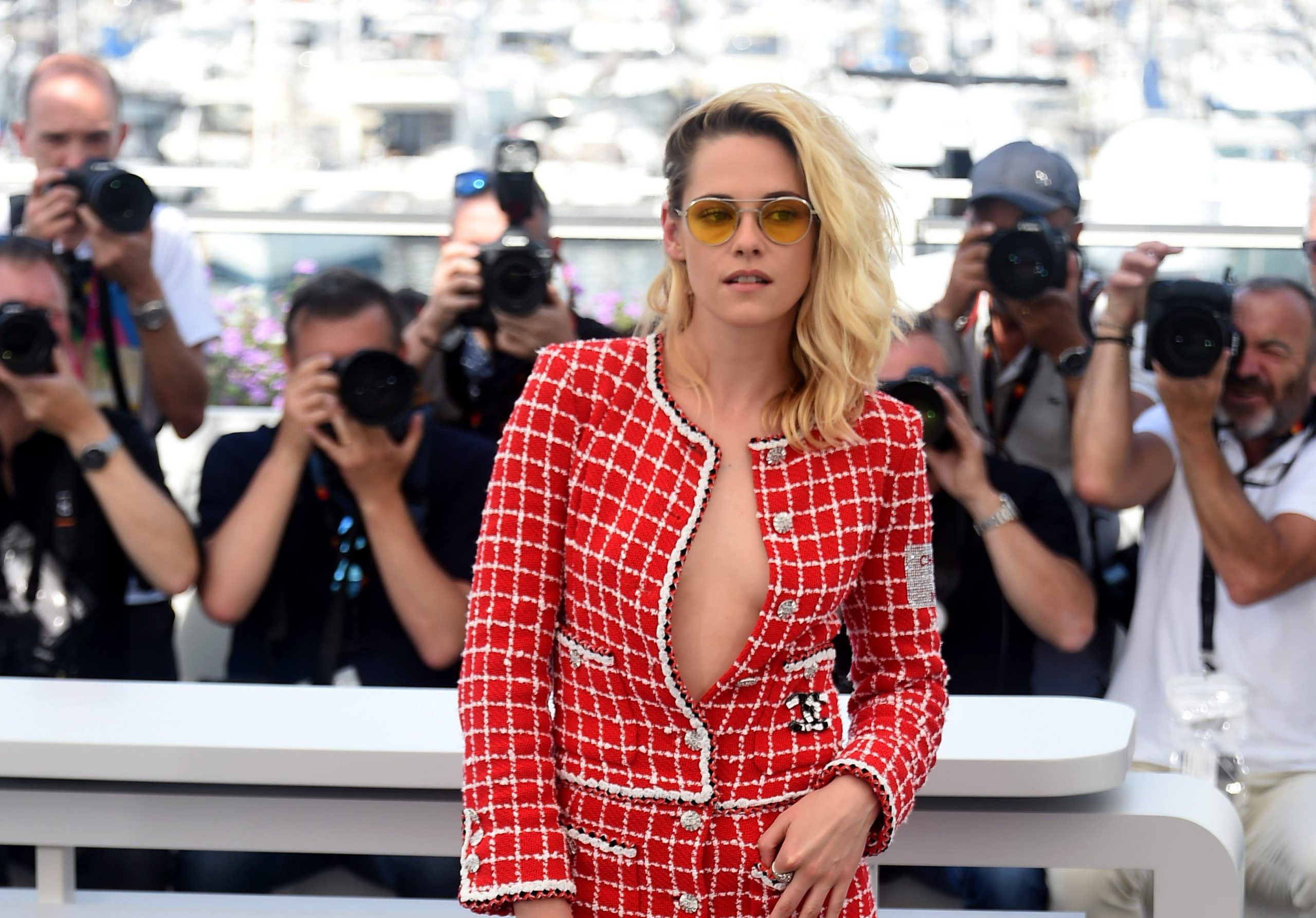 From the Cannes Film Festival, which helped to upset the deadly Crimes of the Future …