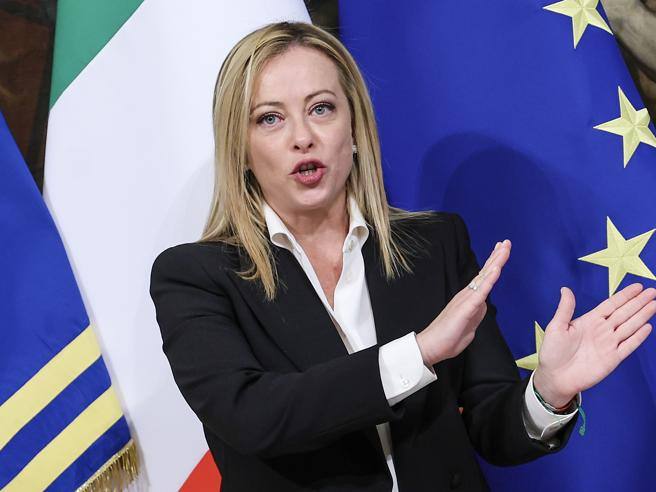 Meloni government, today confidence in the Chamber: the latest news | Salvini: with Giorgia and Silvio we will carry out the center-right program

The news on the Meloni government, live: today an appointment in the Chamber for the programmatic declarations of the Prime Minister Giorgia Meloni, who announced a manifesto for the 5 years of the legislature. At 7 pm the first vote of confidence of Parliament in the new center-right government is expected

• Today at 11 the programmatic declarations of the Prime Minister Giorgia Meloni, who announced a manifesto for the 5 years of the legislature
• The first vote of confidence of Parliament in the new center-right government is expected at 7 pm. The Senate will vote tomorrow

10:45 am – Meeting between Salvini and Giovannini at the ministry

This morning the Deputy Prime Minister and Minister of Sustainable Infrastructure and Mobility, Matteo Salvini, met the outgoing Minister Enrico Giovannini. It was an opportunity to take stock of the situation and check the progress of the most delicate dossiers. A note reports it.

«Salvini’s program? A very normal thing, God forbid that a minister cannot make proposals, indeed. I consider it positive that Minister Salvini has this activism that demonstrates the will to do that is in the ropes of the entire government. We all look with great attention to the proposals of each member of this majority but also to the positive proposals that should come from an opposition that wants to demonstrate the level of the Italians and that wants to contribute to the defense of national interests “. This was stated by the Minister of Food Sovereignty, Francesco Lollobrigida (FdI), at theHandle.

“First let’s hear what the government has to say. We will object to the contents, without discounts, but first let’s listen to what they have to say ». Maria Elena Boschi told reporters before entering Montecitorio.

10:28 am – Abodi: “Vote of confidence, it is the beginning of a path of regeneration”

“It is the beginning of a path of regeneration”. So Andrea Abodi, Minister of Sport and Youth at the entrance of the Montecitorio building where today the vote of confidence in the Meloni government is expected.

09:52 – Toti: Meloni moves with more caution than some allies

«Noi Moderati does not expect anything because it seems to me that the moment in the country is not that of the transfer market or, worse, of the cow market. We ask to be able to make a contribution to the government and we believe we represent an important sensitivity in the country, then Giorgia Meloni will decide ». These are the words of the governor of Liguria Giovanni Toti (Italy in the Center) a Tg1 Morning on Rai 1, referring to the appointment of deputy ministers and undersecretaries of the new government. «Meloni is acting with great prudence, even higher than some ally of the Government. I obviously hope to see a perspective and reforms in your speech to the Chambers ».

09:35 – Salvini: “With Giorgia and Silvio we will carry out the center-right program”

“From the stop at Fornero (page 10 of the center-right electoral program) to fiscal peace (page 5), from the Flat tax (page 5) to the Bridge on the Strait (page 3), from the defense of the borders (page 7) to the fight against traffic of human beings (page 7): it’s all in the government program awarded by millions of Italians. The left and its newspapers resign themselves: with Giorgia and Silvio we will pass from words to deeds with common sense, trust and determination ». The Deputy Prime Minister and Minister of Sustainable Infrastructures and Mobility says so, Matteo Salvini.

Action leader Carlo Calenda wrote on Twitter: “Between the dispute of merit and the controversy over La Presidente, it seems to me that the left is preparing to be the best ally of the right.”

Between the dispute over the merits and the controversy over The President, it seems to me that the left is preparing to be the best ally of the right.

09:26 – Piantedosi: migrants, saving is a priority but stopping dead journeys

“The aspects that induce us to assume attitudes that require a certain sensitivity clearly come first: therefore the salvation of people and the humanitarian approach. But it is certain that everything that can be aimed at preventing these journeys that sometimes turn into death journeys will be at our attention ”. Thus the new Minister of the Interior Matteo Piantedosi al Radio Rai Newspaper he anticipated the line of the new government on the immigration emergency front. The minister announced shortly the convening of the National Committee for Public Order and Security to address the issue of migrants, including with the police forces.

On trust in Parliament «I think there will be no problems. The center-right has the numbers to gain confidence in both branches. The real challenge is not today’s and tomorrow’s appointments, it is to demonstrate that this government is capable of providing answers to the country’s problems ”. The new Minister of Public Administration says so, Paolo Zangrillohost of Rtl 102.5.

08:54 – Richetti: “The sabotage has begun from the right, the future at risk”

«Salvini is already talking about it; Forza Italia, torn apart, squabbles for seats and armchairs, Meloni pretending nothing has happened. They still have to leave, but the spectacle of the center-right government is embarrassing. While Draghi greets, leaving us his latest masterpiece as a dowry, this immature right forgets the interests of citizens and goes in no particular order. Today we will say no not only to this executive, but to a vision of Italy that does not belong to us and that sabotages the future of the country for unacceptable shop interests ». So Matteo Richetti, head of the Action-Italia Viva group in the Chamber of Deputies.

08:27 – Forza Italia, clash between hawks and governists: and there are also those who evoke the split

(Tommaso Labate) On the table, from tomorrow in the days to come, everyone will perhaps put their tactical denial on the record. Applies to Silvio Berlusconi
who in the fort of Arcore prepares the return to Rome and file the speech on trust in the government by Giorgia Meloni who will pronounce in the Senate, the first in Palazzo Madama nine years after the decadence. It is perhaps true for Antonio Tajani,
who took possession of his new desk at the Farnesina. And it also applies to the group leaders who animate the “hawks” faction, Licia Ronzulli And Alessandro Cattaneo. But outside the perimeter of tactics, the war has exploded so much that someone has even evoked a split: governists with Tajani here, where “here” is a sort of “party of liberties” satellite of the Brothers of Italy; and “hawks” beyond, where by “there” is meant what would remain of Forza Italia.
Read the full article here.

08:24 – From migrants to the economy: Salvini’s pressing has already started

(Marco Cremonesi) The borders of Italy and the stakes on bills and mortgages, the bridge over the Strait and pensions. Matteo Salvini on day two of the Meloni government – who will receive the trust today starting at 11 – begins to carve out the role of him and that of his party. First point: «We will go back to enforcing borders». Because “it is unthinkable that ships from all over the world operate all over the world and then arrive only in Italy”.
Read the full article here.

08:21 – Meloni, today the confidence in the Chamber: “We will work to keep the country united”

(Francesco Verderami) “We will work to keep the country united,” Meloni said today in the House in his speech for confidence. And it won’t be a formal quote. Because it is true that the premier represents a political party, but it is in a context of war and deep economic crisis that she will have to govern. Meloni is aware of the expectations that her advent in Palazzo Chigi has raised in public opinion, but the growing difficulties produced by the dramatic internal and international situation do not escape her. To prevent the two crises from twisting and ending up undermining social peace, you will appeal to the “republican spirit”, calling upon political forces such as those of the business and work world to collaborate: each exercising its own function and its own role. Therefore the “manifesto” with which you will present yourself to Parliament, proposing a “legislative program”, will have a clear center-right profile but will contain those ecumenical signals that the moment requires.
Read the full article here.

Giorgia Meloni is expected from 11 in Montecitorio for the vote of confidence in her government. After the speech in which the Prime Minister will indicate the executive’s programmatic lines, the session will be suspended to allow it to go and deposit the text in the Senate, where the debate and the vote will take place tomorrow from about 13.

Then, from 1pm to 5pm the general discussion, at 5 pm Meloni’s replyfrom 5.30 pm to 7 pm the explanations of vote e finally, the voting with nominal call from 7 pm which will end between 8 pm and 8.30 pm.

Videogames entered his life in the late '80s, at the time of the first meeting with Super Mario Bros, and even today they make it a permanent part, after almost 30 years. Pros and defects: he manages to finish Super Mario Bros in less than 5 minutes but he has never finished Final Fight with a credit ... he's still trying.
Previous Milan in the round of 16 of the Champions League with two victories. Four points are enough only if …
Next Lexus car of vip at the Rome Film Fest 2022