Mila Kunis takes the side of her husband and accuses Demi Moore of unnecessarily removing “the dirty things of the past”. The actress in her memoirs did not portray him in the best light – their relationship was full of sexual adventures, threesomes and betrayals. Demi described how a miscarriage and IVF therapy failed her causing her to abuse drugs and alcohol. The couple broke up in 2013.

Kutcher joined Kunis two years later, they have two children – 4-year-old Wyatt and 2-year-old Dmitri. Mila did not expect all the “dirt of this account to see the light of day”. She emphasizes that the actor is no longer the same person. “She doesn’t see any sense in telling about it after so many years (…) It is, why should I go back to it? According to her, there is nothing good about it, it can only hurt. Ashton is a fantastic father, devoted to his family. what to blame his good name? ” – reports “Hollywood Life”, citing a source close to Kunis.

As she adds, dealing with Kutcher’s past and his relationship with Moore is one thing, but the fact that the whole world knows about their lives beyond the glitz and flashes is her biggest problem. “Mila is not satisfied and she is really waiting for it all to pass (…) It is definitely not pleasant for her” – summarizes the source of the portal.

In her defense, Moore said that she could not omit this important thread in her life in her memories. And before publication, she contacted Ashton Kutcher.

Sam interested, however, after Moore, in an interview with Diane Sawyer in “Good Morning America”, told the backstage of their marriage, posted on Twitter an entry: “I had something mean. But I deleted it when I looked at my children and wife.”

Demi Moore and Bruce Willis – together and yet apart

Bruce Willis seems to be doing much better with his ex-wife’s memories. The actor on Monday took part – together with his wife Emma Heming – in the author’s meeting and the party, which took place after the official part. They were also accompanied by their children – 31-year-old Rumer, 28-year-old Scout and 25-year-old Tallulah. They all posed for photos together.

Earlier, in The New York Times, Moore mentioned that leaving Willis was not easy, although it turned out to be good for everyone. “It may sound funny, but I’m proud we got divorced,” she admitted. And she added: “It seems to me that Bruce was afraid that I would hinder our breakup, that in a fury of anger and anger (…) I would make it difficult for him to access his children, that I would All those tricks divorcing couples do. But I didn’t, and neither did he. “

As she noted, the two made a concerted effort not to “destroy the family they created” and to give their daughters “the love and support of both parents”. 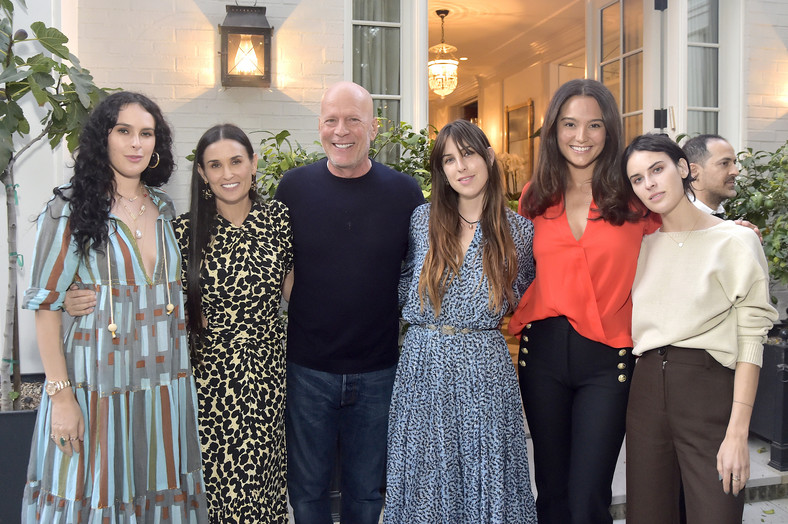 Demi Moore was raped as a 15-year-old. A dramatic confession

“It was a rape. And a terrible betrayal, revealed by this man’s cruel question,” What is it like to be sold for $ 500 by your mother? “, Reads Demi Moore’s book.

The actress appeared on “Good Morning America” ​​where she was asked if she believed the man: “I don’t think deep in my heart. I don’t think it was just a deal. But she still let him and put me in danger.” – she said.

“Inside Out”. Memories of Demi Moore

In her biography entitled “Inside Out” Demi Moore describes her childhood story to “climbing the steep steps of Hollywood”, being in an uncertain world of glitz and fame, and a relapse into addiction, which cost her the loss of her family.

The actress also recalls her troubled childhood spent on suitcases – she lived in New Mexico, Pennsylvania, Ohio and Washington State before her family landed in California. At the age of 15, she was raped. She ran away from home. Two years later, she married rock musician Freddy Moore, whom she herself admitted had repeatedly betrayed. She abused alcohol and cocaine, she suffered from eating disorders. – I was obligated to serve. Otherwise I would not be loved – he recalls that time. It was then that her film career began – she appeared in the first films.